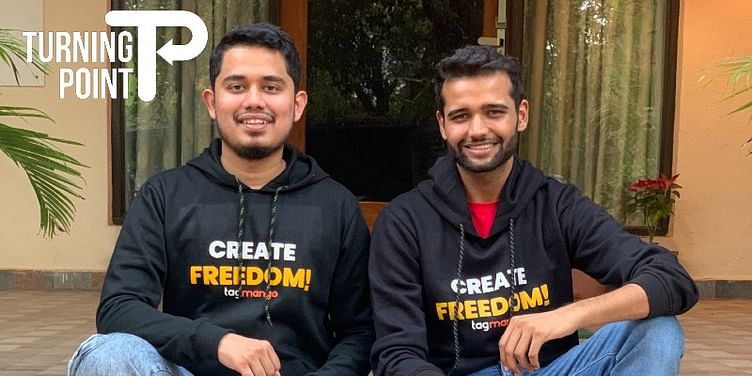 The Turning Point is a series of short articles that focuses on the moment when an entrepreneur hit upon their winning idea. Today, we look at Kolkata-based TagMango, which is helping influencers and celebrities to scale their community.

How do influencers earn money? Very often, they find it difficult to monetise their personal brands. Divyanshu Damani from Kolkata cracked it for himself. Realising the lack of adequate infrastructure for such influencers, creators, and artists in India, he wanted to create a platform that could generate revenue for them.

This led him to start ﻿TagMango﻿ with his friend and serial entrepreneur Mohammad Hasan. Part of Y Combinator’s 2020 cohort, the homegrown startup was started in 2019 with an aim to build a brand-independent revenue stream, establish more meaningful interactions, and build a lasting following for Indian creators.

Since its launch, the startup has worked closely with more than 100,000 creators, influencers, and artists, and is now targeting the next 500 million internet users in India.

From seeking money to making money

Divyanshu started creating content at the end of 2017. A motivational speaker, he usually speaks on personal, insightful conversations with extraordinary and interesting people. He had also been a speaker at leading platforms such as TEDx, Josh Talks, and colleges like SRCC, NM, IITs, and IIMs

However, to create his own brand, he decided to do a live show in Kolkata, for which he had to push around 700 tickets. He identified about 100 creators from Kolkata, all with about 5,000 followers, and offered them free tickets if they posted about his show on their social media handles.

“That was the only thing I did when it came to marketing that particular event. It worked well and close to 65 percent of my conversion happened due to that strategy. I soon realised that India would be the perfect market to go after something like this,” Divyanshu says.

Recently, the startup launched its app to further strengthen its mission of turning Indian creators into entrepreneurs through sophisticated tools, helping them scale communities and unlock revenue streams.

Having already onboarded more than 3,000 organic creators in the soft launch, TagMango helps creators build engagement-driven communities to which their audiences and followers can subscribe, ensuring a regular brand-independent avenue to monetise for them.

The startup raised Rs 5.5 crore in seed funding led by Y Combinator, Kevin Lin (Co-founder of Twitch), XRM Media, Pioneer Fund, and Angel Investors from the US and UAE.