The importance of giving: how to connect altruism, optimism and social impact 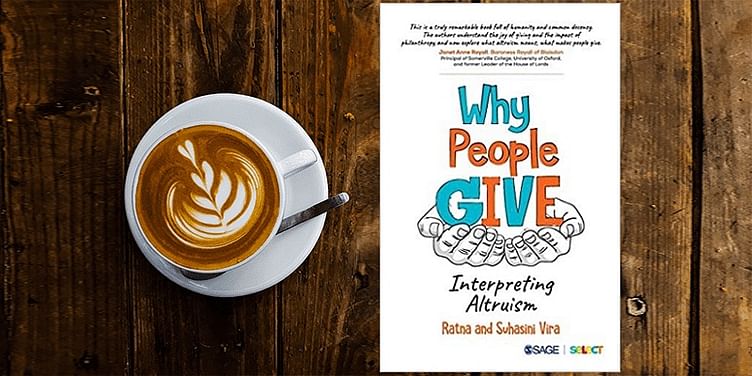 Why do people give generously? How can we amplify the spirit of giving and contribution, particularly during crises? This book explains the foundations of altruism.

Throughout the ages, people across cultures have often wondered how much charity one should give, to whom, how, why, and with what expectation and impact.

Altruism is about giving out of compassion without expectation of material return. Foundations and frameworks of giving at the individual, organisational and societal level are well explained in the book Why People Give: Interpreting Altruism, by Ratna Vira and Suhasini Vira.

“Life is as much about giving as it is about receiving,” the authors begin. Those who give not only think differently but also act differently. Giving to and caring for those perceived as less fortunate is a source of happiness to giver and recipient as well.

The authors are a mother-daughter duo, Ratna Vira and Suhasini Vira. Ratna is an artist and author of the novels Daughter by Court Order and It’s Not About You (see earlier interview here). Suhasini is now Research Assistant at the Institute for Government, Durham, UK.

The 220-page book is based on three years of research, the authors describe. It draws on over 40 cited resources, ranging from books to academic journals. Each chapter ends with a short fictitious conversation between two colleagues, debating various aspects of giving such as the phase in life when one becomes a giver.

Here are my takeaways from the 15 chapters of the book. See also my reviews of the related books In the Business of Change, Lean Impact, Social Entrepreneurship in India, A World of Three Zeroes, Do Good, and Scaling Up.

The authors trace the rise of altruism across some of the world’s civilisations. Practices in Hinduism include daana (charity and giving), paropkara (benevolent deeds), dakshina (eg. gift or fee for the guru), and bhiksha (alms).

In some cultures, charity is to be given only to the worthy, and at a specific time and place – while others see giving as independent of the receiver’s worthiness. Even small changes can give hope, the authors write.

The ancient Greek tradition of stoicism advocates self-control and fortitude to overcome destructive emotions. What can and cannot be controlled or influenced should be separated.

While basic survival (and therefore some selfish behaviours) is built into our genes, it is possible to teach and demonstrate how to be charitable, generous and altruistic. Sometimes, altruism for one group can lead to dissonance such as selfishness between other groups, eg. caring only for one’s family as compared to broader society.

“While altruism may not be in our genes, it is very much part of what makes us human beings,” the authors write.

“Memes are the unit of cultural transmission,” the authors describe, likening generosity and philanthropy to memes. People give for reasons such as sympathy, guilt, social pressure, or the desire of a “warm glow.” Some acts of giving can be systematic, others are “random acts of kindness.”

Altruism is not just about aiding the helpless but creating a better world for us all. Some happy people are generous as well, and want to share their good fortune with others. The act of giving can improve mental and even physical health, and improve professional and social relationships, the authors explain.

Charity is driven by compassion and a desire to give immediate relief; it does not seek to address root causes. Philanthropy, on the other hand, has a longer-term plan to transform society, the authors explain.

Altruistic giving for the love of humanity is one of our noblest instincts, according to Pushpa Sundar, founder-director of Sampradaan India Centre for Philanthropy.

Some donors and organisations want private recognition, others public. Some companies want tax breaks and refunds, depending on the country’s regulations. Some donors also want an active say in how their funds are managed, others have a hands-off approach.

The authors cite the work of Martin Seligman, regarded as the father of positive psychology, which focuses on human strengths (eg. courage, creativity, perseverance) and not just overcoming weaknesses.

Altruism is also influenced by emotional intelligence: the abilities of perception, thinking, language and goal attainment by managing emotions. Positive emotions improve connections and resilience, and increase pride and gratitude.

Positivity channels grief and despair and turns them into powerful tools for service and giving. At scale, positive emotions can inspire a sense of awe and have a larger purpose through an upward spiral.

Gratitude is actively noticing others and what you receive from them. Gratitude is very powerful when combined with mindfulness or savouring the beauty of the moment and being attached to the world.

The authors define optimism as a “complex web of beliefs and thoughts that have a behavioral impact on us.” It involves perception, problem engagement, and a leap of faith to solve it through leverage and influence.

Optimists seek out information, reach out to people, and are inclined to take purposeful action. They have effective coping strategies, and even a good exercise routine and sense of humour.

Altruism is also powered by focus, determination and grit, the authors add. This helps overcome depression about the self, the world, and the future.

The ecosystem of giving

Giving can be in cash as well as volunteering time or sharing expertise pro bono, the authors describe. For some givers, donations are an expression of their social identity and goals in life, and they look for maximum impact on self and recipient.

Charities, donors and helpers constitute the ecosystem of giving. Some involve high-profile social events like a gala dinner or fundraising drive, while others may require participants to make a significant effort (eg. running a marathon). In some countries, the National Lottery also partakes in some charity activities.

Some charities use a “feel good” strategy and instant gratification in their advertising, others warn about tragedies that can be averted through contributions, the authors explain. Anecdotes and stories play an important role in this regard.

The “visibility effect” pertains to improvement in social image of the giver, or a signal to others to give as well. Social media generates such visibility, and incentivises many donors to post online about their donations (though others may choose to remain anonymous or unnamed).

Unfortunately, reports of corruption and excessive bureaucracy have tainted the image of some aid organisations. Other concerns are lack of clear impact benefits and methodologies.

The media plays an important role in showcasing the impact of giving, and should not focus just on negative or sensationalist news. They should not indulge in polarising behaviours either. Constructive journalism is about playing the role of watchdog, featuring solutions-oriented stories, and facilitating a future-oriented debate, the authors explain.

Natural disasters can create a sense of victimhood and helplessness, but there are also inspiring and uplifting cases of people who help each other and even emerge stronger from trauma, the authors observe.

Unfortunately, India does not rank very high in the Charities Aid Foundation’s World Giving Index 2018, which compares contributions to a stranger, donating money, and volunteering time. The top six countries are Indonesia, Australia, New Zealand, US, Ireland and UK. The authors call for more strategic philanthropy, purposeful plans, and informed giving in India.

The book is filled with examples of altruism in action, mostly to support high-cost operations of children with heart disorders (examples from other sectors would have also been a welcome addition).

In sum, the book provides a good overview of the role of active giving in society and its psychological and social foundations. The stories add a human touch to the research material as well.

The book opens the door to further research and guidebooks on social giving, citizen activism during disasters like the coronavirus pandemic, and the role of technology and crowdfunding in amplifying the practice of giving.

The book is packed with inspiring quotes, and it would be fitting to end this review with the sample below.

To give without any reward, or any notice, has a special quality of its own. - Anne Morrow Lindbergh

We ought to do good to others as simply as a horse runs, or a bee makes honey, or a vine bears grapes season after season without thinking of the grapes it has borne. - Marcus Aurelius

Be brave to live from your heart. - Roy Bennett

The secret of getting ahead is getting started. - Sally Berger

We take for granted the very things that most deserve our gratitude. - Cynthia Ozick

Be quiet so that life may speak. - Leo Babauta

Hope begins in the dark, the stubborn hope that if you just show up and try to do the right thing, the dawn will come. - Anne Lamott

Will and energy sometimes prove greater than either genius or talent or temperament. - Isadora Duncan