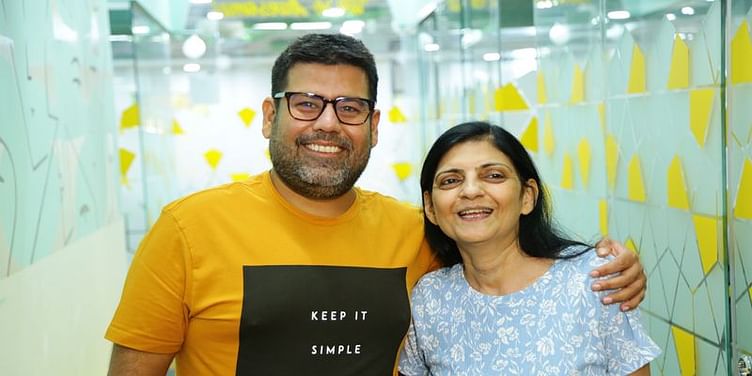 AngelList-backed CoffeeMug.ai is an invite-only professional networking platform for top-of-the-funnel talent. It uses AI to fulfil hiring, investment, and network building needs of CXOs, founders, VCs, and other business leaders.

Dipti co-founded JeevanSathi.com, was a founding member at MagicBricks.com, and also served as the Chief Business Officer of Lenskart in her last role.

On the other hand, Abhishek founded San Francisco-based startup TenMarks.com (later sold to Amazon) way before online learning became a catchphrase. Later, he also served in leadership roles at ixigo, Times Internet, and Dineout (as its COO).

The two got together to start CoffeeMug.ai in February 2020 (just before the pandemic) as a professional networking platform that would help people make meaningful connections in offline set-ups.

The goal was to curate connections and help people scale up their professional network beyond LinkedIn because “how many people can you know on your own”.

Co-founder and CEO Abhishek tells YourStory, "The idea was that we will set up physical meetings in a coffee shop, make warm intros, set the context, partner with cafes like Starbucks, CCD, Costa, etc., and allow people to connect with each other. Coffee has the connotation of an informal setting. And we believe that a lot can happen when two people connect in an informal setting,”

Needless to say, things turned out differently as the pandemic hit in March 2020, and made physical meetings a thing of the past.

It also allowed the Singapore-based startup to tweak its roadmap, align its vision with an increasingly virtual world, and eventually gain product-market fit.

“The first lockdown set the tone and made us what we are,” Co-founder Dipti says.

It uses a proprietary AI-based matchmaking algorithm to enable seamless connections and set up video meetings between stakeholders.

After a year of operating as a web-only platform, CoffeeMug.ai launched its Android app on Wednesday. The iOS app is currently being beta tested with select members.

Essentially, CoffeeMug is a curated platform of senior professionals or leadership talent. “We believe that we are a value network that makes relevant connections virtually and breaks down the barriers of traditional networking. Magic can happen when you bring the top of the funnel together,” says the co-founder.

The platform caters to the top three needs of its target segment:

a) Jobs (senior professionals seeking jobs or looking to hire other leadership talent, including business partners or co-founders)

Users have to express their intent at the start of the product journey, based on which CoffeeMug uses its AI to throw up meaningful matches (connections).

Co-founder Dipti elaborates, “The platform asks you questions to capture user intelligence. If you make the cut, your profile is approved, and you can go on to discover other members. Otherwise, you are put on a waitlist. We are a member-centric and opt-in platform. We match you only if you opt-in and specifically sign up for meeting slots. When you express interest in an objective, the algorithm intelligently deciphers it, and matches you with equals depending on the power balance, your mutual objectives, industries, and other requirements.”

Once a pair is matched, CoffeeMug.ai sends out a meeting invite to both parties. Users get a reminder 45 minutes before the start of the meeting, and a WhatsApp message when one party has joined.

“We are deeply integrated with WhatsApp because our entire product has been built keeping the distractions of senior leaders in mind. We are a silent concierge service for people with paucity of time. Hence, our integrations are seamless and they don't demand anything from you. You can get the CoffeeMug meeting link and join from WhatsApp,” the co-founder explains.

Members rate other members at the end of every meeting. A better rating guarantees better matches in future.

“We are not a daily use platform. Our goal is to map you correctly, match you correctly, and deliver a good experience. We’re clear that we’re not a DAU/MAU platform at all. We set up that one important meeting in your calendar that can weave magic for you," Dipti says.

CoffeeMug claims to have recorded consistent growth since its launch. It has enabled more than 215,000 connections among members in 10 countries, with an 85 percent interaction rate. Besides India, the US and Singapore are its top markets.

The platform launched referrals in January, which boosted the organic visibility of members. The second lockdown starting April 2021 was the next big growth driver, with CoffeeMug users growing over 3X from 20,000 in March to 65,000 in July.

“This category of networks will thrive in difficult circumstances even more. The platform becomes a big anchor for you in tough times,” Dipti states.

CoffeeMug.ai currently has over 83,000 members, and is signing up 10,000 users for meetings on a weekly basis. Its users include investors from Nexus Venture Partners, Elevation Capital, Kalaari Capital, AngelList, Matrix Partners India; startups such as CRED, Haptik, Lenskart, TerraView; Big Tech companies like Amazon, Facebook, Google; investment banks like Morgan Stanley, and more.

Beyond the startup and VC ecosystem, corporate lawyers and advertising professionals are also emerging as strong user categories, reveal the founders.

“Almost. 90 percent of our users are from India, and 10 percent are overseas. We want to tilt this because our aspiration is to build a global network. By the end of 2021, we will focus our energies on Southeast Asia and the US.”

CoffeeMug.ai has also roped in 18+ clients to help them with leadership hiring. It charges them a success fee, which is its only revenue stream for now.

“CXOs have limited new opportunities. Most staffing agencies still operate like in the 80s. And LinkedIn has become the TikTok for professionals. We are a neutral party that is solving the problem of power balance in hiring,” Abhishek explains.

The startup plans to create an additional revenue stream in the investment vertical, where it will charge startup clients on helping them raise funds. “We are focused on building an enterprise model around the curated community,” adds the founder.

In June, CoffeeMug.ai raised $625,000 in a pre-seed round led by Paradigm Shift Capital and AngelList India.

"CoffeeMug will use these funds to cement their acquisition models to expand globally and add more muscle to its AI-based matchmaking algorithm, which perfectly aligns with the Future of Work. Their unique platform-centric senior leadership-only model streamlines networking and unlocks real opportunities for its members around recruiting, partnering, mentoring, and investing verticals.”

“We’re looking to raise our seed round in the next few months. We have demonstrated the growth trajectory that institutional VCs look for,” Abhishek adds.

CoffeeMug operates in a dynamic space that has benefited from virtual meetings becoming the norm post the pandemic.

The successes of ‘warm introductions’ platforms like Lunchclub, FounderDating, WarmIntro.ai, IVY, and FrenchFounders in the West have prompted several local entrepreneurs to launch similar apps.

Besides CoffeeMug, Future-of-Work platforms like TapChief (recently acquired by Unacademy), Grab Chai, and Lunchclub India are also catching up.

Professional networking is a global market ripe for disruption. With LinkedIn getting increasingly diluted, new-age gated communities could be the way forward.

Abhishek signs off by saying, “Worldwide, there would be 200 million people who are in some or the other decision-making role. That will be our TAM. We are committed to building better business relationships using technology.”