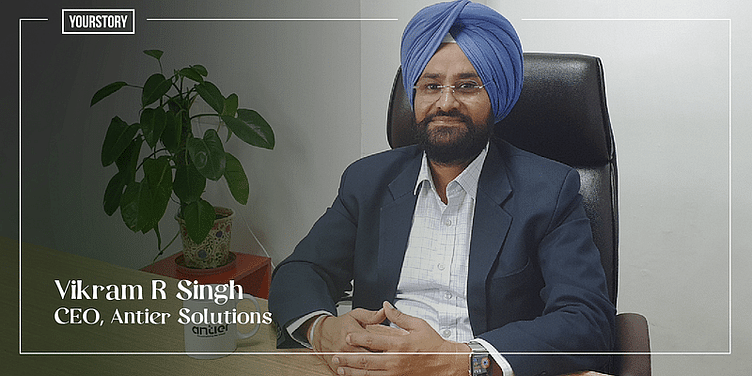 No longer limited to governments and selective corporations, data is finally a democratic asset and blockchain is the epicentre of this transformation. It is growing faster than we think as global tech companies are venturing into the services.

However, Chandigarh-based ﻿Antier Solutions﻿ had foreseen the trends six years ago when the world was just waking up to the potential of cryptocurrencies. As a full-service blockchain development firm, Antier’s success is a testimony of its determined leader at the forefront – Vikram R Singh.

Under Vikram’s leadership, the company’s blockchain portfolio has mushroomed from one product and 100+ team members to 20+ services and 300+ team members. Over the past 16 years, Vikram and his brand have evolved but never compromised with the innate knack to take difficult decisions and embrace change.

In 2009, Vikram risked his only savings of Rs 40,000 to build a team of four professionals. At a time when India and most parts of the world were tied to legacy processes, Vikram followed his instinct and went full throttle in his journey.

Back then, the industry was swaying between the onset of the Web revolution and the lack of technical expertise. It was this void that Vikram targeted and fulfilled. Through design-driven thinking, he wanted to deliver avant-garde platforms to prepare customers for the era best known as Web 2.0.

And a decade later, Antier was among the fastest-growing web and mobility development companies with a team size that was up by 10X.

In 2016, with a bigger company and a similar penchant for emerging technologies, Vikram stumbled upon blockchain. The sacred vision of elevating the common user through decentralised finance had him arrested and there was no looking back. Once again, he risked his sustainable clientele and steered Antier’s resource strength towards R&D of fintech over blockchain. Needless to say, there was no hesitation in making the big move.

This time, with a team of 100 employees, Antier went on to create a comprehensive portfolio of blockchain services in crypto exchange and wallet development.

When asked why blockchain, Vikram says, “Blockchain is the technology meant for the people and not for selective corporations. It gives the power back to the people and that’s the purest form of democracy we all debate about.”

Blockchain technology has a ‘shared distributed ledger’ model where data and transactions are encrypted and recorded. What I love is its ability to build a democratic world through peer-to-peer transactions of money and data.

While we are at it, Antier’s blockchain success stories swear for its spectacular performance over the years. The company’s portfolio covers DeFi, NFTs, Smart Contracts and fully customised layer-1 and layer-2 blockchain networks. It has a strong technical foundation in writing decentralised protocols for finance, supply chain, real estate and digital arts. Antier is already listed among Good Firm’s world list of top 30 smart contract service providers. Last year, the collective market cap of all tokens developed and launched by Antier touched 500 million.

It is equally important to acknowledge Antier’s Learning & Development arm focussed at finding talent and training them into blockchain and allied skills.

Opportunity lies in the eyes of the beholder

For Vikram, blockchain is not just any other trend. He says, “World finance is undergoing a massive makeover. Take CBDCs for example. Governments and financial institutions are eagerly exploring this space to make transactions more secure and accessible to everyone. This transformation is essential because programmable money again gives ownership to the people.”

“Soon you’ll hear about more countries legalising crypto money. For us, it is an exciting phase to build decentralised fintech products and we are well prepared for it. We are relentlessly working on an exclusive DeFi wallet product for the B2B as well as B2C markets,” he adds.

Going forward Vikram wants to expand Antier’s footprint all over the map. He is pushing the limits to add more sectors and markets for the upcoming years. When asked about organisational expansion, he confidently says, “We are expecting our workforce to touch 2000 teammates in the next three-five years. So our existing workspace facility would expand to 100,000 sq feet in the next year. We are also opening new offices in the Americas and the Middle East.”

Today, Antier’s journey is nothing less than an inspiration. It is a tale of determination and belief, all shown by the man at the heart of it all, Vikram.