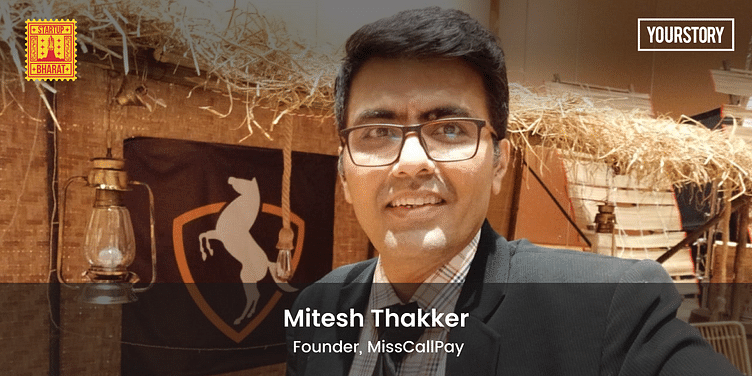 Founded in 2017 by Mitesh Thakker, Bhuj-based startup MissCallPay aims to make P2P and ecommerce transactions easier on feature phones and in areas without good internet infrastructure.

There are more than 2,000 fintech startups in India, currently, according to a report by IFLR, solving for everything from retail investment in capital markets, financial planning, and tax filing, to automating quant trading, investing in cryptocurrency, and buying insurance in a convenient way.

But the penetration of financial services in rural India continues to remain a problem, mostly because of inadequate grassroots infrastructure, especially when it comes to internet services. Most fintech applications —  even P2P payments —  are hosted on the internet, and the lack of a good telecommunications network in rural areas precludes the population living there from accessing these services.

Moreover, not everyone can afford the even mostly cheaply-priced smartphone, which again makes it difficult for them to use fintech apps and services.

Bhuj, Gujarat-based ﻿MissCallPay﻿ is trying to change that.

At its core, MissCallPay is a fintech startup that does away with the use of internet services to facilitate payments, and instead uses telecom’s most basic feature — cellular network —  to enable payments. Which means that people with a basic, starter feature phone can accept and initiate online payments.

The startup’s founder, Mitesh Thakker says the tech MissCallPay is based on, and the number of people it can cater to can not only enable digital payments for the population underserved by fintechs, but help boost ecommerce in those regions, especially when it comes to MSMEs.

“Our technology can play a vital role in helping MSMEs reach out to the rural population. We provide an easy and simple medium for payments and transactions, which is particularly helpful in areas with very low or with no network coverage,” Mitesh tells YourStory.

Founded in 2017, MissCallPay aims to cater to the 550 million phone users who don’t own a smartphone, as well as the 277 million users in rural India who may or may not have a smartphone, but definitely lack decent internet services. It also hopes to eventually grow from P2P payments to enable bill payments, bank transfers, and e-commerce transactions via offline/cellular network services.

MissCallPay, unlike most soundwave-based services, does not need proximity to enable transactions.

Every merchant or person accepting payments is issued their own unique mobile number that they can use to receive money. This number is issued by MissCallPay’s partner banks, which currently includes Bank of India. The startup is in talks with Ujjivan Bank and Bank of Baroda to extend its services further.

To initiate a payment, the sender has to simply give a missed call on the receiver’s unique phone number, after which they receive a callback from the company. An IVR message asks the payee to enter the amount they wish to pay to the merchant, and enter a secret PIN, which is tied to their UPI or bank account. After the sender punches in their PIN, the amount gets transferred to the receiver.

“The entire process of entering the amount and then the PIN is similar to what people carry out when they withdraw money from the ATM. Everyone already knows how to do that because we’ve been using debit cards for a long time —  and that, all the more, makes it easier for people to adapt and use our technology,” Mitesh says.

“It’s just three easy steps — no complex UI/UX. The facility is also available in the merchant or receiver, and the sender’s regional language, so it can really be used as widely as needed,” he adds.

The tech is in compliance with the NPCI and RBI guidelines. In fact, Mitesh argues it’s safer than traditional applications since the secured PIN is entered in call-back mode, which means it’s not connected to the internet where hackers mostly reside.

Beyond P2P payments, the startup is evaluating tie-ups with electricity companies and telecom operators, who, by indicating their unique MissCallPay number in the bills they generate for their users, can enable them to make transactions without leaving the comfort of their homes or having to walk up to their nearest digital services portal.

MissCallPay’s competitors include ﻿Tonetag﻿, which uses sound waves-based technology to enable digital payments but needs proximity, as well as startups like Eroute Technologies, ﻿Payse﻿, PayLo, ﻿Novopay﻿, Ikaz, and IndePay, that are working on similar offline solutions.

The startup is currently angel-funded, as well as has raised seed money in competitions, including the Bill Gates Grand Challenge in 2020, where it bagged $30,000. It is planning to raise a Series A in the next six months.

The digital payments market in India is expected to grow at 27 percent CAGR to Rs 7,092 lakh crore in FY 2025, from Rs 2,153 lakh crore in FY 2021, according to a report by the Indian Private Equity and Venture Capital Association (IVCA) and Ernst & Young.

With the Indian government and the RBI putting its weight behind startups solving for Bharat, MissCallPay is placed to capitalise well on the growing trend.