These are great times for the Indian startup ecosystem, say experts at TechSparks 2021 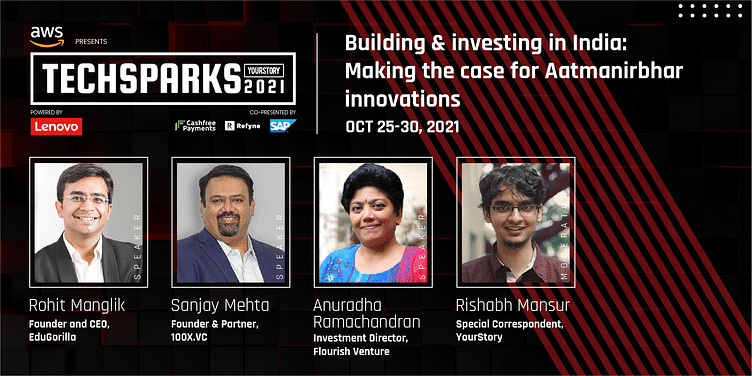 At TechSparks 2021, experts highlight how new deals, the emergence of unicorns, and IPO developments are leading stakeholders to rethink their idea about the Indian startup ecosystem.

The COVID-19 pandemic shook the world like no other event in recent times.

In India, several companies, especially in sectors such as manufacturing, hospitality, and travel took a huge blow at the beginning of the first lockdown last year. However, being locked in homes also meant almost everything in daily life – be it education, healthcare, finance, or daily purchases - went online overnight.

While digital disruption in these sectors was already under way in India, it had not been completely adopted as offline alternatives existed. The pandemic forced everyone to go digital. This opened up several opportunities, especially in the Indian startup ecosystem.

Keen to make India self-reliant or aatmanirbhar, the startup ecosystem focused on building indigenous tech solutions to cater to the demand of the new normal.

“I have been never been so confident in Indian entrepreneurs and Indian ecosystem. These are great times and this is just the beginning. We, at 100X.VC, we write the first cheque and we are like the initial discovery platform. We invest in a class mode so we got around over 4,800 applications, almost double of what we used to get in our past classes. So I think there is huge momentum and I think the government is also doing great stuff in terms of creating the right infrastructure,” Sanjay said.

Sanjay revealed that with the ongoing momentum in the startup ecosystem in terms of the funding deals, unicorn valuations, and IPOs, he was now revisiting his beliefs about the country.

“On my LinkedIn profile, I had a banner, which talked about India having 100 unicorns by 2025, and this year, it just changed everything, right? We have unicorns being announced almost every week…. I am revisiting all my beliefs about India. The momentum is crazy,” he said.

Anuradha Ramachandran, Investment Director, Flourish Venture, explained that in pre-COVID times, nobody thought that the adoption of digital tools would significantly grow at the consumer end.

“Whatever else the pandemic has done, it has also accelerated the trend of using digital tools substantially. But having said that, there is a lot more to be done at the underlying level. So, you think of any tech, whether it's health tech, consumer tech, fintech, edtech, or ad tech...if you look at the last two years, all kinds of technology ventures have picked up simply based on the fact that people have begun to use their mobile in a different way and much more business-oriented way.

“I think it is a great moment for many entrepreneurs to build tools, which are actually very relevant for the huge population. So from having, you know, like about 70 million Indians benefiting to the next 700 million benefiting... that is the time we are looking at now,” she explained.

She also said that, however, there are underlying needs for things to happen. Citing the requirement for infrastructural needs, she highlighted that even amid the growth, health-focused digital infrastructure was at a point of “overload” at the moment.

“In terms of many of the regulations that are there, in fintech, we are also seeing that regulators are trying to balance between reviving the economy, looking at what will happen for the future, and grappling with trends like crypto among others, which are rapidly changing the world. There are many fronts changing so rapidly. Therefore, there is a requirement for both the underlying infrastructure as well as the regulatory thought process to evolve much faster. That's something I think we should be paying attention to as a market,” she said.

Accelerating innovation from inside Bharat

Speaking about expanding innovation and technology in Tier 2, 3, and 4 cities, Anuradha said businesses mostly start by focusing on India as a whole and don’t come out with innovations only for urban regions.

However, the adoption happens mostly where there is web penetration and based on economics. The adoption generally becomes easier in urban regions because of population density, which increases client density.

“When it goes beyond the larger cities, there is much more dispersion in terms of the population…. The availability of infrastructure also goes down substantially. So, with each of these things, we start seeing that it becomes more difficult for businesses to create a reason to be there.  I think that is slowly changing. Adoption was a major issue initially. But word of mouth has percolated in urban areas now because WhatsApp is ubiquitous, for example. So people are much more comfortable with their phones. In that context, there is growing confidence in the ecosystem, in people's own ability to use technology tools, and in terms of the product and services relevance of them available as well,” Anuradha said.

For a line-up of all the action-packed sessions at YourStory's flagship startup-tech conference, check out the TechSparks 2021 website.