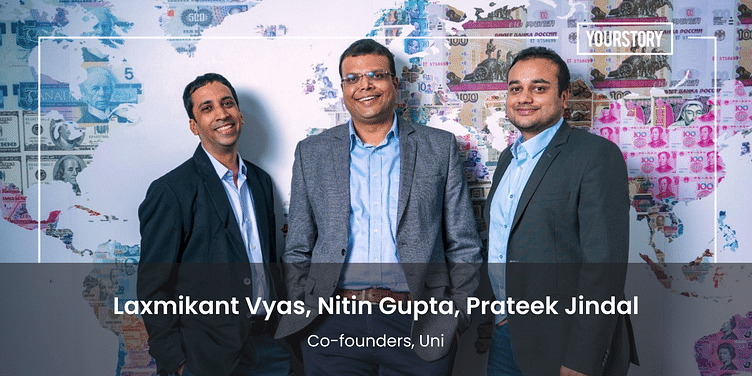 Founded by PayU founder Nitin Gupta, along with Prateek Jindal and Laxmikant Vyas, Uni expects to use the funds to launch new products and further invest in tech. Nitin told YourStory that he's looking to expand the team to 200 members by the end of next year.

Fintech startup Uni on Wednesday announced that it has raised $70 million in Series A funding round from investors including General Catalyst, Eight Roads Ventures, Elevation Capital, Arbor Ventures, and existing investors Lightspeed and Accel.

After the raise, the startup hit a valuation of $350 million, its CEO and Founder Nitin Gupta told YourStory.

He added that ﻿Uni Cards﻿ expects to use the fresh capital to launch new products in the payments-backed lending space — four of which will be unveiled next month — as well as hire across roles. The current team size is 100, and the startup hopes to double it by next year.

From Rs 175 crore in monthly disbursals currently, Uni says it plans to hit Rs 1,500 crore in the next year, cashing in on the growing consumer appetite for credit and also the way users view the product. Nitin said Uni had an NPA rate of only 0.06 percent — among the lowest in the industry.

"Customers have increasingly become open to new ideas of payments. They look at Uni as a payment product, not a short-term loan," Nitin told YourStory.

Over the last year he spent building Uni, Nitin says he has realised that customers eventually choose the best product, and not one that is just convenient. This has directly influenced the way he thinks about Uni's future.

Over the next few months, Uni is set to launch a host of pay-later, microcredit products that have a layer of digital payment on the top — what Nitin calls "credit-led payments." He added that unlike some fintech startups, especially in the BNPL space, that have started pivoting to a neobanking model to service users end-to-end, he believes credit-led payments are a massive opportunity in India.

When asked if P2P lending is something that interests him, Nitin said he loves the space and will definitely get into it, "someday".

Founded by Nitin, who had earlier founded PayU and served as Ola Financial Services' CEO; Prateek Jindal, who built Ola Money Postpaid; and Laxmikant Vyas, who led PayU's product and consumer credit business — Uni offers ‘Pay Later’ loans via a Uni Card and allows users to split their payments into three parts, which they can pay off in three months without paying any interest rates.

Users who do pay off their total outstanding balance in one shot get rewarded with a cashback of 1 percent, which goes a long way to incentivising more people to pay back as soon as they can.

The startup launched its beta version in June 2021 and has been growing at 50 percent month-over-month since then. It raised a seed round of $18.5 million in October 2020 when it was still in stealth mode. It launched Pay 1/3rd card in June 2021.

"There are few countries in the world where the opportunity for credit expansion is as massive as in India, and we believe some iconic companies will be built to capture this opportunity in the next decade," said Alex Tran, Managing Director at General Catalyst, in the press release.

Uni is currently present in 50 cities and hopes to expand to 50 more in the next quarter.