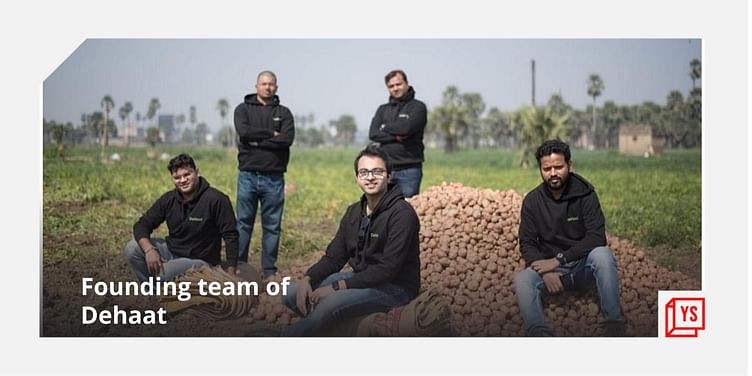 DeHaat acquired Helicrofter for an undisclosed amount. In a conversation with YourStory, Shashank Kumar, Co-founder and CEO, DeHaat, talks about why they chose Helicrofter and the next steps for the agritech startup.

Agritech startup ﻿DeHaat﻿ on Monday announced it has made its third acquisition in Maharashtra-based B2B agri-input marketplace startup, ﻿Helicrofter﻿.

Shashank Kumar, Co-founder and CEO, DeHaat, said that with the integration of Helicrofter, encompassing 2000+ agri-input retailers and 30 sellers across Maharashtra, DeHaat has added another major Indian agricultural belt to their already expansive geographical footprint.

But why Helicrofter, which is a new-age B2B ecommerce platform for the agri-input industry. Buyers on its platform are retailers and community leaders who represent a few villages who buy directly from the agri-input manufacturers of seeds, pesticides, fertilisers, equipment, machineries, and allied products used by farmers.

The startup, which has received funding from Axilor, has achieved exceptional business with annual turnover of Rs 50 crore working with close to 2000 retailers and 30 sellers in around five districts of Maharashtra.

In a conversation with YourStory, Shashank elaborates on the move, “Acquisitions can be tricky decisions, influenced by a multitude of factors. What makes a particular company suitable for us is the complimentary proposition – either in terms of geographical presence or products and services on offer.

"In the agri-domain, the sample size of the problem statement is huge and requires collaborative approach to deliver large scale impact. At the same time, it is extremely important for us that the vision of the companies we associate with aligns with our own. In this regard, Helicrofter was a perfect match.”

For a while now, the team had a keen eye on the kind of work that the team at Helicrofter had been doing in Maharashtra.

“We saw massive potential in them and the congruence of our values and business models further encouraged us to explore synergies with them. The acquisition of Helicrofter is extremely significant to us, as it marks our foray into the agricultural belt of Maharashtra and aligns with our overarching goals of geographical expansion,” adds Shashank.

Helicrofter consists of a small team of 50 individuals, led by Siddhartha Choudhary.

Even before forming his own company, Siddhartha had been closely associated with the agricultural ecosystem through his stint as a Product Manager for Cotton and Vegetable business at American agro-chemical company, Monsanto. He was also CEO of DestaGlobal, a farm input ecommerce startup, where he played a critical role in building the complete tech stack for input market linkage and enabling the company to drive revenue.

“With the closing of this acqui-hire process, the entire team of Helicrofter will now be a part of DeHaat. The hyper-local network expertise and relations with agri-retailers/sellers that the team comes with is precisely the kind of market boost we were going for. This integration is a strategic step in the right direction towards our larger mission of catering to 5M Indian farmers by 2024,” says Shashank.

He adds they have always been an entrepreneur-friendly organisation with number of entrepreneurs leading key business verticals, and driving impact at scale.

“With the regional expertise and acumen that Helicrofter’s team brings in, we are all set to strengthen our foothold deep into Maharashtra and across other key agricultural regions in Western India. We see Siddhartha as the right person to lead the overall geographical expansion across Maharashtra as well as our other target states of Gujarat and Chhatisgarh,” says Shashank.

How has DeHaat evolved?

DeHaat was founded in 2012 by IIT Delhi, IIM, and NIT alumni Amrendra Singh, Shyam Sundar, Adarsh Srivastav, and Shashank Kumar. Based out of Gurugram and Patna, the startup aims to help farmers increase their yield using technology. DeHaat’s initial team also included IIT-Kharagpur alumnus Manish Kumar, who no longer is a part of the company.

The startup has always been focussed on a farmer-centric model of functioning. Shashank adds that the core idea behind DeHaat has been to resolve issues within the Indian farming ecosystem by focussing on providing technological solutions, and bringing together the entire laundry list of agricultural value chain offerings under an integrated platform.

“We have always been focused towards digitising Indian farmers & their farms to drive efficiency through our full-stack AI/ML solutions. We believe the multitrack nature of our offerings has been one of our key differentiators from the competition, as well as a major USP for our users,” says Shashank.

He says over the past 10 years, DeHaat has witnessed a tremendous growth trajectory.

“We have proven our business model in Bihar, and have today successfully scaled to seven states, building a 4,000+ strong micro entrepreneur network and serving 7 lakh+ farmers. At the same time, our team has grown to 1,100+ professionals with deep expertise in growth strategy, supply chain management, technology and agricultural science,” says Shasank.

In the early days, a major chunk of the work, both in terms of research and network building, happened on the ground. “The micro-entrepreneur network became the major backbone that aided our mission of mass digitisation,” he adds.

In DeHaat’s case, starting with the DeHaat Business App (DBA), product transformation has happened in multiple parallel paths, across different product verticals, catering to each stakeholder’s market compulsions and technology requirements. “Along this journey, we have been successful in creating a more balanced phygital suite of offerings that bends to the farmer’s need,” adds Shashank.

Over the past ten months, DeHaat has witnessed a 4x growth. Shashank says they are on track to continue growing at the same pace for the remainder of FY’22. Even in terms of network expansion, the team has amassed more than 700,000 farmers and 4000+ micro-entrepreneurs, with many more being added every day.

“When we decided to foray into this industry, there was no precedence of a strong agritech player in the market. Even today, we are the only Indian company that can claim to be a full-stack agritech platform that caters to almost all aspects of the farming sector. From the very beginning, we have had to build our operations from the ground up and have had to face some amount of resistance from a largely traditional user base,” says Shashank.

Shashank explains that thanks to the ‘phygital’ model, the team have been able to not only build farmer friendly technology solutions and deliver those to farmers on their smartphones, but also cater to non-smartphone audience through an expansive call-centre setup as well as strong on-ground presence, both in terms of manpower and micro-entrepreneur network.

With 160 million hectares of arable land, defined as any land capable of being ploughed and used to grow crops, India is the world’s second largest agricultural market after the US, according to Bain & Company. The startup competes with the likes of Plantix, AgNext, Wolkus Technology Solutions Pvt Ltd (Fasal), Agrostar, Agri10x, Gramophone, and others in a rapidly growing sector.

According to NASSCOM, India has more than 450 agritech startups, which are increasingly empowering 150 million-odd farmers with data-led systems.

“Our one consistent goal remains to reach out and directly impact the lives of millions of Indian farmers and associated communities. The low profit margins that farmers generate, despite their year-long toil on the fields, has been a major pain point for us. So far, we have been successful in creating a system that allows them the scope to earn a fair income, along with receiving the highest quality of crop advisory and assistance required,” says Shashank.

He adds the team will continue their expansion Pan India building on this scope along with driving digital adoption. Furthermore, they will also be adding new tech offerings as well as scaling up value-added services like credit and insurance to our existing stack of services.

Asked about any further acquisitions and acqui-hires, Shashank says, “We are always open to exploring the right opportunity for fund-raise as well as engaging with entrepreneurs’ who possess a striking vision that impacts real and measurable change. If we do come across more of such companies or individuals in the coming months, then we would be more than willing to explore synergies with them. Going forward, tech enhancement and network expansion will emerge as key themes for any potential acquisitions or acqui-hires.”