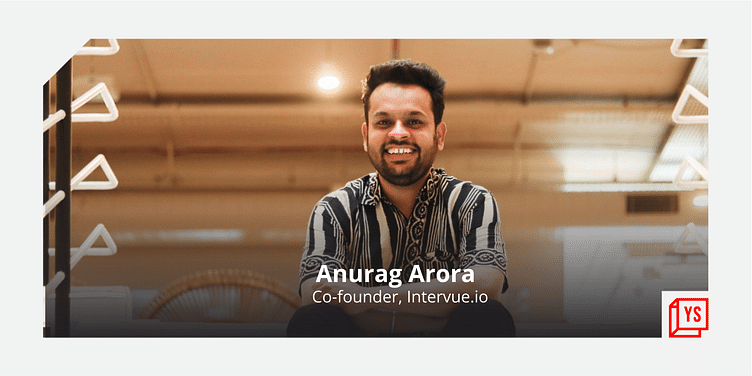 Anurag Arora, the former design head from Uber, joined the SaaS platform Intervue.io as its co-founder. We explore the startup and what value addition will Anurag provide to the startup.

Anurag Arora, the former design head of Uber, has joined the SaaS hiring platform ﻿Intervue﻿ as the co-founder.

Previously worked with Uber for five years, Anurag was part of the team that worked on the design of Uber Lite, Uber Bus app, m.uber, and Phone call to Uber. With six and half years of experience in product design, the National Institute of Design graduate also worked for Twitter for a year.

He notes that the experience as Head of Rider Design India, where he worked to have his team members believe in a vision, is similar to how the startup ecosystem works, and it would enable him to use his experience here, at Intervue.io.

Anurag’s primary role at Intervue.io will be to look after the product development and design. Rahul will focus on growth and Pushpender will take care of engineering.

The 40-member team started as a code-sharing platform, where an interviewer and the candidate code connected by the Intervue audio-video call, claiming to be the fastest coding environment in India, built by its five-member technology team.

The platform has managed to sign up some of the big names in the startup ecosystem such as ﻿Zomato﻿, ﻿InVideo﻿, ﻿Bounce﻿, and ﻿Paytm﻿, to name a few.

Over time, the company claims to have added new features to become a technology evaluation platform not just for interviews, but for assessments as well, where multiple candidates can be assessed.

“What we are trying to solve here is to help democratise hiring instead of losing out on good candidates. As the hiring manager, you can actually look at the interview in a snippet. This is where we believe we add value,” said Anurag.

The platform also helps companies to evaluate as per each company’s criteria. As of now, it is catering to engineering hiring only, with a future focus to add other technical verticals.

What Anurag brings to the table?

Rahul says, “Anurag is someone with good product sense and he has this knack for choosing what to build and when to build.” “It is a key feature as we are in a growth stage trying to utilise the resources at hand. Strategically, he plays an important role here and apart from that he is a very talented designer.”

Rahul further explains that with Anurag in the picture, he has become a catalyst in building the product the right way.

“Building the right product and building something that is needed is important rather than building a ton of things where a percentage of things might not even be used.” This is what the founders believe would be strongly followed now that Anurag joins the board.

"I am very excited to join. I am all about solving a real need and hiring as you may already know is one of the biggest problems areas that is yet to be solved. This plus an opportunity to work with Rahul again who brings the growth mindset and grit to the equation was an opportunity that was too good to pass’

Anurag, who is a close friend of Rahul since their college days, has been a consultant with the startup since its inception. He officially started to work with the startup in December last year," tells Anurag.

Before this, the duo had tried their hands at creating a digital wallet and a designer accessory and stationery startup during their college days. As they had a very little experience then, they split their ways and went on to work for various companies.

“We were extremely ambitious back then and now as well. It's good that we connected again after seven to eight years, with him coming from the product side and we, Pushpendar and I, looking into growth and engineering aspects. I think that's a lethal combination, which can take us to success,” says Rahul.

Why a product design company is venturing into early-stage investing

“We are an organisation aimed at making other organisations more efficient when they are hiring for technical positions,” explains Rahul.

“We plan to eliminate any and every inefficiency that an organisation has in relation to hiring,” adds Anurag.

The startup claims to be having a 70 percent month-over-month revenue growth. It also has plans to launch a new product in the coming weeks.

“We are working on a product that’s very disruptive in terms of how we look at the inefficiencies,” explains Anurag.

The company has plans to raise another round of funding, but after reaching a few milestones.

“To us, a good growth metric will be gaining access to most Indian unicorns. We will eventually want that to happen. We are already working with many unicorns in India. Capturing this and working with at least 60 of them will be a good start from a growth standpoint,” explains Rahul.

Apart from focusing on the home ground, the founders also have the vision to expand its scope in the US. As of now, Intervue has clients across India, Europe, and the US.