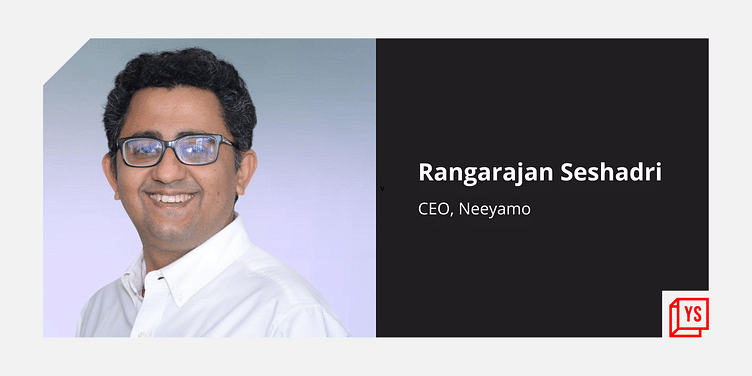 Founded in 2009, Neeyamo started out as an HR outsourcing company. Now, it is focussing on technology-led global payroll business to power the next chapter of its growth.

According to MCA fillings, Neeyamo recorded a global consolidated revenue of Rs 213.12 crore for FY 2021, up 14.9 percent from Rs 185.46 crore in the previous fiscal. Its client base, the company says, has also expanded over the last few years.

The founding team has worked in the HR space since 1999, witnessing the industry evolve in India firsthand. “We have been helping large multinational corporations transform their HR operations in terms of technology implementation, process, standardisation, process. It was a new industry which concentrated on the entire hire to retire segment,” Rangarajan tells YourStory.

The Neeyamo CEO explains why the company decided to focus on payroll services.

“We started out as an HR outsourcing company. Somewhere along the journey, we realised that the problem statement was larger and louder in payroll as it was not being automated or innovated for a very long time especially when it comes to multi-country payroll."

When Neeyamo began its operations in 2009, the HRtech space was scattered, with companies having to work with multiple HR players in a region. This was especially true for the payroll segment, which has to deal with varied tax and compliance issues.

Neeyamo found success early in its journey. According to its founders, the company has been completely bootstrapped, turning profitable within the first month as it signed a Japanese firm to restructure its HR department.

The company initially provided all the services pertaining to HR outsourcing but has now shifted gears.

From HR outsourcing to payroll

While HRtech and payroll providers are generally clubbed under the larger HR category, the segments cater to different needs of a company. HR tech comes with a bundle of services in areas such as recruiting, performance management, and training products. Payroll service providers take care of salaries, employee leaves, and salary tax compliance among others.

Neeyamo, which has been working on its plans of becoming a pure-play payroll technology provider since 2015, outlined its vision in its MCA (Ministry of Corporate Affairs) filings for FY 2020-21.

Its current services, the company said, will be offered as allied services.

“We have this single payroll platform and individual country extensions, which run payroll engines in 150 countries along with allied payroll systems. So, we have created the entire payroll ecosystem to make it completely digital right now,” explains Rangarajan.

This is what the company calls the Global Payroll Hyperloop framework.

Neeyamo says it integrates its technology into customers’ pre-existing HR technology, both upstream and downstream, simplifying the payroll process for users.

Global payroll is Neeyamo’s go-to-market client acquisition strategy and its largest revenue generator. The company expects to fulfil its aim in the next 24-36 months.

The company says it makes contracts that have an annual contract value of $3-4 million per customer with a time period of about three to five years. It processes about 12 to 13 million employee payrolls yearly.

Neeyamo says it caters to close to 300 customers now; 35 percent of which are in the US, 35 percent in Europe, 5 percent from India, and the rest from APAC (Asia Pacific), MENA (Middle East and North Africa).

For the past three years including the pandemic, the company has been adding customers to its profile. This, the CEO says, as a result of businesses accelerating the digital transformation strategies.

The company also claims that it has a 100 percent retention rate. Rangarajan attributes this to the fact that payroll, a highly sensitive segment, doesn’t see clients moving from business to business. He also adds this is also the reason why there are very few companies in this segment as it has a high entry barrier.

It competes with the likes of Ramco, AllSec, NGa, and Ascent Payroll in India.

As HR veterans, the founders zeroed in on the potential of talent present in Tier-II and III cities of India.

“Our products are getting built today from tier two, tier three cities of India like Madurai, Nagpur, Thanjavur, Aurangabad and Belgaum (or Belagavi),” tells Rangarajan.

While other businesses see skilled workers move from smaller to larger cities, Neeyamo has focussed on creating jobs locally. “As corporations, we had the responsibility to create jobs where the talent is present. This is what we follow as the mantra of Neeyamo,” adds Rangarajan.

It started its expansion in Tier-II and III cities with Madurai in 2016. Last year in September, it also launched an all-women global development centre in Nagpur, Maharashtra.

Apart from three offices in India, Neeyamo has 24 offices around the world which include the Philippines, Vietnam, and Mexico. The company also has a plan to add close to 25 non-metro cities to the list by the end of FY 2023.

The company has a total of 3,000 employees across countries with more than 1,500 in two Madurai centres, one Nagpur centre, and remote centres. Apart from the founders, the company has provided ESOPs to 60 of its employees and plans to add 200 more.

Rangarajan says that raising funds was never in the company's plans as it hit profitability early.

The company also plans to make its next business move of either going public or raising funds in the next two years.

“We are looking at liquidation options…maybe in six months we would have come up with a very clear plan,” tells Rangarajan. Currently, Neeyamo is expected to value at $2 billion.