Creative collaboration: how an artists’ workshop led to this outstanding art exhibition 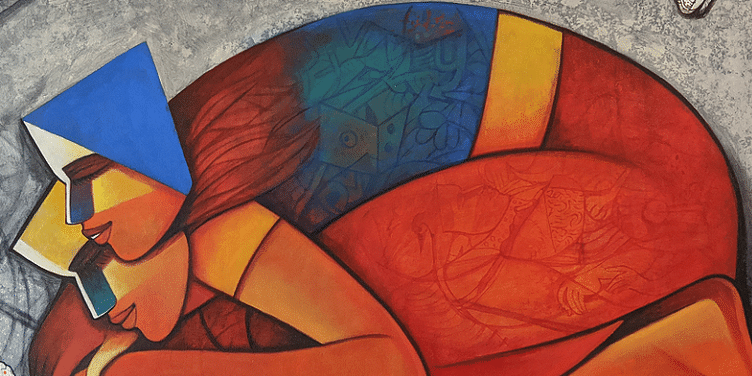 In this photo essay series, we showcase more stunning artworks and curator insights from the Alchemy art exhibition. Enjoy!

As part of the exhibition, Alchemy: Change is the Only Constant, the works of 22 artists were showcased at Phoenix Kessaku in Bengaluru. See Part I and Part II of our coverage, along with artist insights.

Parameshwar Raju, born in Vandrum, Andhra Pradesh is a contemporary calligraphy artist. He spent his childhood in various Indian cities where his father used to get posted as an army officer. Parameshwar has art degrees from the Government School of Art and Babasaheb Ambedkar Marathwada University.

He has received awards for his research of Indian iconography and spiritual and ceremonial culture. Some of his works are housed at the Museum of Sacred Art in Belgium. His creative focus includes iconographs from Buddhism, Sikhism, Judaism, Islam, Zoroastrianism, and Christianity.

Arabinda Samanta has an arts degree from Calcutta University, and specialises in sepia mural art techniques. He has held over 50 solo shows, starting off at Jahangir Art Gallery in Mumbai. His spiritual works are based on the theme Satyam Shivam Sundaram (truth, divinity, beauty).

As a collaborative group, Subrata Ghose, Rajib Sur Roy, and Subroto Karmakar are referred to as the ‘Three Musketeers.’ The Kolkata-based artists have exhibited together in over 30 shows and art festivals across the country. Their works span canvas paintings and sculptures.

Sonu Mulchandani, Founder of E-Studio in Bengaluru, has put together a range of outstanding exhibitions over the years. See our earlier photo essays on E-Studio, Phoenix ArtSci Festival, and Contemporary Group.

For the exhibition, Estudio earlier organised a three-day residential workshop with a group of artists. “It was then that the exhibition theme of ‘alchemy’ was discussed,” Sonu explains.

“Those three days were like a feast to my senses. That is where the selection of my artists happened. I had also sent a brief about the exhibition to all my artist groups across the country, as well as two artists overseas,” she adds.

Sonu is full of praise for the venue as well: Phoenix Kessaku. “It’s the most luxurious decor space, with five themed clubhouses and a skywalk with stunning views of the city. The space itself is like a piece of art,” she enthuses.