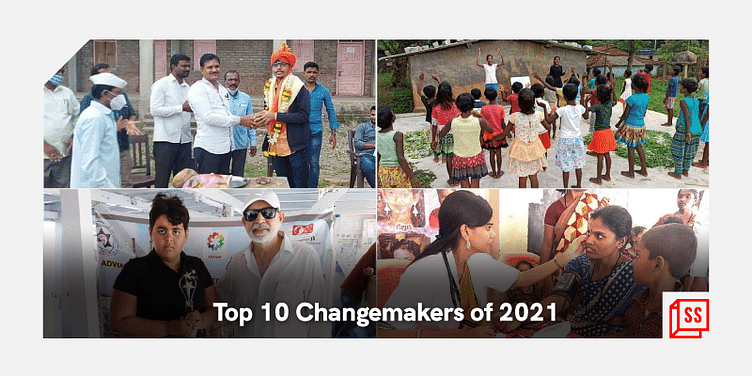 As 2021 comes to an end, YourStory looks at some of the inspiring stories that you loved to read this year.

The Covid-19 pandemic disrupted daily life in 2020. And, the year 2021 was no different. Irrespective of the challenges, people from different walks of life came together to help one another in these turbulent times.

SocialStory celebrates 10 such changemakers, whose stories continue to inspire us to do good.

Dipika Minz, a Class 7 student, has taken up this task to help small children at her school in Chandapara village in Khutni to keep their learning ongoing during the lockdown.

This 11-year-old tribal girl has been conducting free classes to support her juniors with their school work to ensure they do not fall behind. Reportedly, she took up this task to help small children at a private school in Chandapara village in Khutni to keep their learning ongoing during the lockdown.

These classes are divided into various batches based on age groups and, at present, has above 100 students attending them.

Dipika teaches English and Maths to her juniors and also attends her own classes conducted by other volunteers in the village.

In May 2021, Javed Khan, a 34-year old auto-rickshaw driver from Bhopal, was making headlines for his efforts in rushing people to hospital in times of emergency.

There are so many covid heroes in India 🇮🇳!

This auto-rickshaw driver, Javed Khan, in Bhopal has converted his vehicle into an ambulance, complete with oxygen, and he serves people for free. Khan spends around Rs 600 a day filling up oxygen. pic.twitter.com/wXUjf8AhBZ

Javed was dedicated to the cause to the extent that he even sold his wife’s jewellery and converted his auto into an ambulance. He has placed a 7 kg oxygen cylinder inside the autorickshaw, which was gifted by a social activist named Bharti Jain. In addition, many people have also donated to his cause.

The money has been used to buy a pulse oximeter, sanitizers, PPE kits, and other protective equipment, which helps him stay safe on these journeys.

Amid the devastating second wave of COVID-19 leaving patients gasping for breath, an inspiring story of recovery by sheer willpower has emerged from Delhi. Ninety-six-year-old Pushpa Sharma from Naveen Shahdara has proved that where there is a will, there is a way.

Pushpa, who lives with her son Arun Kumar (67) and daughter-in-law Meena (64) in Naveen Shahdara, tested positive for the infection on April 18 but was under treatment at home, and doctors confirmed her recovery on May 9 following tests.

Her family members, who too were down with the deadly virus, credit her "willpower" and the "positive atmosphere" at their home for her recovery at a time when the second wave of the COVID-19 pandemic has hit the country hard.

Amid the COVID-19 second wave, Jamshed Singh Kapoor has been running a mobile "Langar Seva," where he provides dal khichdi to people for five hours each day starting at 3 pm, a practice he has been following for the last few years. He has continued the service even during the distressing times of the coronavirus pandemic.

Wearing a white t-shirt with "Langar Seva" printed on it, Jamshed was often seen crisscrossing the streets of Nagpur city of Maharashtra on his two-wheeler to provide free food to the needy every day.

A 15-year-old boy, Nahul K, who belongs to Kerala’s Malavettruvan tribe – a community of hunters and considered one of the most backward communities of Kerala, had to face several problems while studying. These ranged from poor internet connection, frequent power cuts, and lack of access to electronic devices such as smartphones and laptops.

Despite the challenges, Nahul, who is the son of the community head, N Narayanan, was able to secure an ‘A plus’ in all subjects in the Class X SSLC examination. This called for celebration amongst all the community members in the tribal colony at Kalliyottu as it was a rare achievement.

From a Chennai cop to an Olympian

Chennai-based cop 25-years-old P Naganathan got the opportunity to represent India in the 4*400 relay at the Summer Olympics in Tokyo, Japan.

Born into poverty, Naganathan did not have access to quality sports gear and used to train barefoot. He studied BA History as he couldn’t afford the fees to pursue engineering. He used to work part-time to cover college fees. At the end of the semester, his fees would be reimbursed, considering his performance in sports.

In 2017, Naganathan got into the police as an Armed Reserve Constable on sports quota. He came into the limelight by winning a gold medal at the All India Police Meet in 2019. Later that year, he also won the CM’s trophy at Jawaharlal Nehru Stadium, Chennai.

Naganathan represented India in the 4*400 relay at the Tokyo Olympics along with Arokiyaraj from Trichy, Mohammed Anas from Kerala, and Amose Jacob from Delhi. The team however failed to reach the finals.

The 40-year-old appeared for the civil services exam in 2018. However, the results got delayed due to the COVID-19 pandemic, and she was left with no choice but to find an alternate source of income to make ends meet. She took up the job of a sweeper with the municipal corporation.

While Asha had always dreamt of becoming an IAS officer, she could not appear for the exam as she had crossed the age bar. Now, she will be joining the administrative services as a deputy collector.

Dr Noori Parveen is setting an example for the medical community by treating patients for just Rs 10 in Andhra Pradesh’s Kadapah district. After completing her MBBS degree from a private medical college in Kadapah, she has been serving economically weaker families who are unable to afford medical care.

At Dr. Parveen’s clinic, while outpatients pay Rs 10, she charges only Rs 50 a bed for in-patients. The “Rs 10 doctor” has become quite well-known in a city where private doctors can charge up to Rs 200 a visit.

She also started “Noor Charitable Trust” in memory of her grandfather to take up social work. Under this trust, she organised a community meal programme for the poor and the needy during the lockdown caused by the COVID-19 pandemic.

Jiya Rai, the 12-year-old daughter of a naval sailor Madan Rai, created history by swimming from the Bandra-Worli Sea Link to the Gateway of India, a distance of 36 kilometres in just eight hours and 40 minutes in February.

Ms Jiya Rai, a 12 yr old daughter of a naval sailor, swam from Bandra-Worli Sea Link to Gateway of India #Mumbai on 17 Feb to raise awareness about Autism Spectrum Disorder (ASD). Jiya who herself was diagnosed with ASD, swam the distance of 36 km in 8hr 40 min. @DefenceMinIndia pic.twitter.com/B6q5srnh3y

Jiya who has been diagnosed with the Autism Spectrum Disorder (ASD), began to swim at the age of 10. She took up the swimming challenge to raise awareness about ASD. Starting in the early hours at 3.50 AM from the Bandra-Worli Sea Link, she completed the feat at the Gateway of India at 12.30 PM.

Meet Chandrakanta Debbarma, the first from Tripura to become a Muay Thai champion

From a village to the ISRO office

Somnath hails from an underprivileged family and has had to overcome a number of challenges to reach where he is today. His father and brother worked various odd jobs to help fund his studies.

Somnath, who completed his BTech in mechanical engineering, and is pursuing mechanical design from IIT, Delhi- had applied to ISRO in 2016 but was not able to clear the written exams then. In 2019, on the basis of my MTech degree he applied for this ISRO job and got selected on June 2, 2021 as a senior scientist.

From Satya Nadella to Shantanu Narayen, this Hyderabad school has shaped many powerful leaders of the world