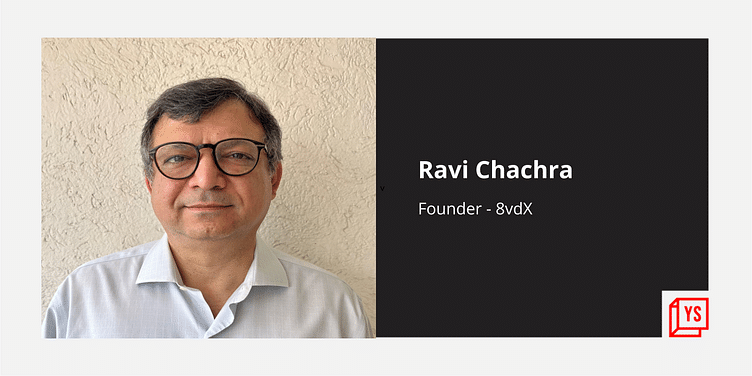 8vdX is a venture debt marketplace that allows early-stage startups to raise capital on comfortable terms while also giving access to investors to be part of such high-growth companies.

Serial entrepreneur and veteran financial investor with a specialisation in credit — Ravi Chachra — believes the present structure of venture debt industry is broken. To fix this, he along with co-founder Vijay Lavhale have created a model where early stage startups can raise money on more “friendlier” terms.

Typically, venture debt comes into a startup after they have raised their equity round of funding which is generally at a later stage along with certain conditions on how they would like to get their money back.

8vdX wants to change this.

“The entire venture debt community is dominated by sleepy incumbents which are ready to be disrupted and there are such onerous terms, I as an entrepreneur will be scared to sign them,” remarks Ravi.

“It is much more useful for a startup to receive funding on day zero and which is founder friendly much before the equity capital comes in,” he adds.

Ravi is a seasoned finance professional with experience over the last two decades and he specialises in turning around distressed assets. He is also entrepreneur having founded ventures such as SNAZ and Eight Capital. Vijay is an IIT-IIM graduate and part of Eight Capital.

Based out of India and the US, 8vdX invests at the seed stage of a startup where it takes equity stake in lieu of the money it provides and Ravi calls this the acceleration capital.

However, how does one identify promising early-stage startups for providing venture debt, given that most new companies end up closing operations.

A study done by IBM Institue of Business notes that more than 90 per cent of the startup in India fail in their first five years, with lack of pioneering innovation being the top most reason.

To avoid this failure rate, 8vdX focusses on providing debt to startups selected by Y Combinator, the globally renowned startup accelerator programme. 8vdX itself is a part of the 2022 winter batch.

“Ninety nine per cent of startups under Y Combinator tend to raise their next round of funding and three per cent of them go on to become unicorns,” Ravi says.

The moment a particular startup is selected by Y Combinator for its three month programme, 8vdX offers it venture debt. Almost all of these startups then go on to raise their equity round of funding on the demo day.

Under the 8vdX model, the interest component of their debt is in the form of equity it has taken in the startup. Founders are required to return the principal as soon as they raise their equity round of funding.

In case a particular startup is unable to repay the principal amount of the debt, the founder has the option to convert the debt into equity.

“We help the early-stage startups where there is minimal dilution of equity by the founders and provide venture debt which complements their seed round,” he says.

To enable this kind of venture debt funding for early stage startups, 8vdX has created a marketplace model where anybody, especially the angel investors, can deploy their capital.

“Think of us as an angel list for venture debt where we are democratising access for the ordinary angel investor,” remarks Ravi.

Adding to this, Co-Founder Vijay says that not all investors have access to the venture capital ecosystem and that 8vdX provides the opportunity to invest in high potential startups. Further, it invests in Y Combinator-backed startups, and around one-third of them go onto raise their Series A round of funding and beyond, making 8vdX sustain in the long term.

In the last three months, 8vdX has offered debt to 16 startups amounting to $2.8 million, of which two belong to India. The company targets to have an asset under management (AUM) of over $75 million in the next 12 months. Ravi says it has been growing at 25 per cent per week.

Though 8vdX is sector agnostic, it has invested in startups from segments such as fintech, B2B SaaS, consumer, healthtech, edtech etc.

“Our goal is to partner with winners and be along with them wherever it takes, which includes even an IPO,” says Ravi.

8vdX says it has already got around 30 investors including angel investors, HNIs, family offices, among others. It also has the ability to provide the debt in local currencies, which includes Indian rupees.

As part of its future plans, 8vdX also plans to set up a VC fund to service the more mature startups. It aims to also set up an India dedicated alternate investment fund (AIF) with the potential to invest in startups outside of Y Combinator fold.

Besides, 8vdX will be creating an information and benchmarking portal which will act as a key performance index (KPI) for the startups to measure how they are progressing. It will also install a captable scenario analysis group to help startup founders to understand everything about fundraising and also connect with other investors.