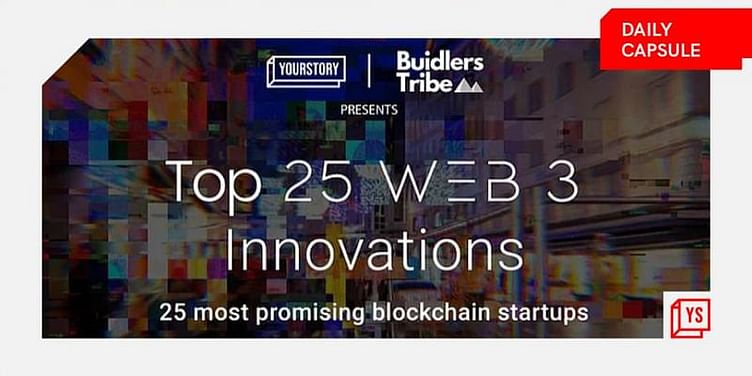 The Top 25 Web3 Innovations report is a specially curated list of 25 promising, Indian founder-led startups in the blockchain segment. Here's a quick look at all the finalists.

The 25 finalists each received a non-tradeable NFT as an award commemorating and proving their status as a finalist of the Top 25 Web3 Innovations cohort.

The report is part of YourStory’s commitment to focus on stories in the blockchain and the Web3 space and to support Web3 startups that we are convinced have the potential to solve problems at scale and define the future of the Metaverse.

YourStory's partners for the report include Woodstock Fund, Hashed Emergent, and Chiratae Ventures.

﻿Biocon﻿ Chairperson Kiran Mazumdar-Shaw needs no introduction. One of India's first woman entrepreneurs, Mazumdar-Shaw is a first-generation businesswoman with over four decades of experience.

In an exclusive conversation, originally recorded at YourStory's Women On A Mission, Kiran Mazumdar Shaw talks about her life journey, how she built Biocon and her father's motivation for her joining beer fermentation as a 'woman'.

Imagine building a C2C (customer-to-customer) business back in 2010 when smartphones weren’t available. This is how the story of cloud customer engagement platform Exotel begins.

In this week’s 100X Entrepreneur Podcast, Co-founder and CEO Shivakumar Ganesan talks about what it takes to stay put in the business despite several challenges and prove naysayers wrong. Read more.

Digital lending is one of the fastest-growing fintech segments in India, but India's rural population still tends to be massively underserved.

To solve the issue, bankers Utpal Isser and Sameer Mishra launched ﻿SarvaGram﻿ to leverage a tech distribution model for assessing the creditworthiness of the consumer. Read more.

Life is a continuum of being able to overcome and transcend setbacks.