India now has 100 unicorns. What does it mean for valuations in the startup ecosystem? 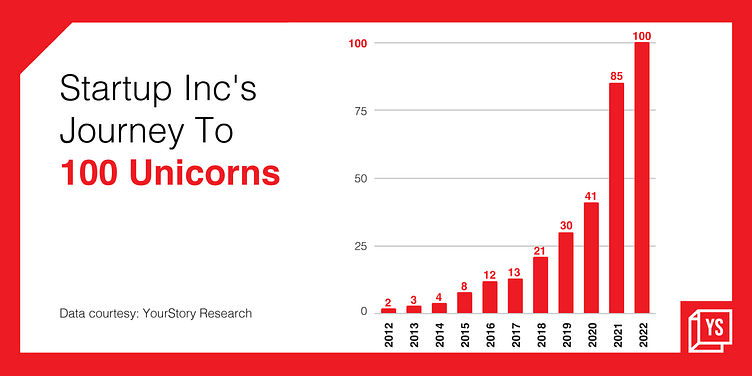 This year’s 15 unicorns already account for 34.09 percent of the 44 we saw emerging in 2021, taking the total count to 100. What does this mean for the Indian startup ecosystem?

The unicorn may be a mythical creature but in the startup ecosystem, it is becoming commonplace. In fact, data suggest the Indian startup ecosystem births a new unicorn every two weeks. For the uninitiated, a unicorn refers to a startup with a valuation of $1 billion and above.

“The unicorn tag is a milestone. As an investor, we look at it as more long-lasting, and while these startups may not last or even have a drop in valuation, the idea of a unicorn as a concept has lasted long (for maybe 16 centuries), and we believe, looking at the growth trajectory and other factors, this particular startup may be lasting.”

As per YourStory Research, India currently has 92 active unicorns.

Open, the latest addition to the list, takes the count to 100 when we consider ﻿Flipkart﻿ and ﻿Bigbasket﻿, which were acquired by ﻿Walmart﻿ and ﻿Tata Group﻿, ﻿Info Edge﻿(India) and ﻿MakeMyTrip﻿ that got listed in the past, and ﻿Hike﻿, ﻿Shopclues﻿, ﻿Snapdeal﻿, and ﻿Quikr﻿ that lost their unicorn tags due to an eventual drop in valuation.

B2B for the win

This year, the business-to-consumer (B2C) versus business-to-business (B2B) startups’ addition to the coveted billion-dollar valuation club has been interesting. While B2C startups grabbed investors’ attention with a lion’s share of the total funding received over the years, B2B startups too have become relevant since 2011.

When it comes to newer unicorns’ business models, 2022 seems to have turned the tables. Out of the 15 startups that were added, 13 are B2B, skewing the ratio to 87:13, given that just two B2C unicorns have joined the club between January and March 2022.

GV Ravishankar, Managing Director, ﻿Sequoia Capital India﻿, says, in terms of sectors, VCs are now chasing areas where technology can make a difference. For example, Software-as-a-Service (SaaS) is a proven model of India growing in the global software market. This was further illustrated by ﻿Freshworks﻿’ successful IPO.

He adds that Sequoia is looking closely at fintech too as financial services is a big market with substantial profit pools, and that the VC already has 40-50 companies in the space across India and Southeast Asia.

“We believe we will continue to see a lot of innovation in the sector because of the sheer size of the problem. This will be across payments, lending, insurtech, and all aspects of financial services,” says Ravishankar.

Varun Laul, Partner, Private Equity, ﻿Investcorp﻿, adds, “India today has the third-highest number of unicorns after the US and China, and the Indian startup ecosystem is a high priority for almost all global investors. This is a strong validation of the quality of Indian entrepreneurs and the rapid growth performance and potential of Indian digital and tech-enabled businesses. We believe that Indian entrepreneurs should leverage this global interest to attract high quality and long-term growth-oriented global investors, who have a history of helping businesses navigate through the later growth stage. As Investcorp, we aim to be this value-added partner to growth-stage businesses.”

A function of growth and hard work of a decade

Founders say both yes and no.

“This growth is indicative of a fundamental shift in the Indian ecosystem. On one hand startups are creating jobs across the board generating both white- and blue-collar employment. On the other hand, they are actively innovating to cater to emerging consumer needs. Unicorns have also played an important part in evolving the partners, and stakeholder ecosystem, across business segments,” says Abhay Hanjura, Co-founder of D2C unicorn ﻿Licious﻿.

Also, according to Ruchi Kalra, Co-founder and CEO, fintech unicorn ﻿Oxyzo﻿, the point of valuations is always a matter of debate. She adds that however, when one looks at the Indian startup ecosystem, the unicorns being created today are a function of the work and effort the startups made close to 10 years ago.

She says, “If you take a village, which has decided to ensure that all its school students will graduate and start sending them for higher education, in a matter of 12-15 years, you will suddenly see that the village has a significantly high number of graduates. But that isn’t overnight, it has been a work in progress for over a significant period of time.”

Similarly, the ecosystem today seems to have a significant number of unicorns as several of these startups had started work five to 10 years ago.

“The post liberalisation era saw an outburst of several brands but these brands existed for a long time before they could be recognised. Of course, you have the outliers. But if you look at even ﻿Ofbusiness﻿ or Oxyzo, the work had begun from 2015, i.e., seven years ago,” explains Ruchi.

Varun adds that Investcorp has invested in some leading Indian new economy businesses, such as ﻿Xpressbees﻿ and ﻿FreshToHome﻿. As investors, he adds, they are driven to seek fundamental business value creation and believe that valuation marks are an outcome of the scale and business model maturity achieved by companies.

“Hence, in our view, if Indian startups continue to execute on their growth agenda and focus on building sustainable businesses, they will attract global capital, and the potential to achieve unicorn status could then become the natural consequence. This is our guiding philosophy to all our portfolio companies — an emphasis on 'time to value creation' and not 'time to valuation',” says Varun.

Ravishankar says, “The number of unicorns today are significantly more than what there were 10 year ago. Until Flipkart, there were hardly any startups that were valued over a billion dollars.”

“Another important thing is that once these valuations turn to real values, more people get rewarded, which in turn creates deeper talent in the ecosystem. This opens the path for more people joining startups,” adds Ravishankar.

India’s tryst with startup unicorns began way back in 2011 when adtech startup ﻿InMobi﻿ attained the coveted billion-dollar valuation. There were intermittent years of lull, as 2013 saw ﻿MuSigma﻿ becoming the second unicorn while 2015 saw a hat-trick in the form of ﻿Ola﻿, ﻿Paytm﻿, and ﻿Zomato﻿.

Then, 2017 saw cleantech major ﻿ReNew Power﻿becoming India’s next unicorn. However, the consistency in the emergence of unicorn startups truly began in 2018 with eight startups elevating to the billion-dollar valuation club, followed by another eight in 2019.

And, with 15 new unicorns already formed, 2022 is also likely to be another stellar year for unicorns.

Also, on a more macro level, the more success the Indian startup ecosystem shows, the more capital will flow into the country. These milestones in turn translate into a larger positive push towards all other Indian startups.

An important reason why today there are more startups than the others is because of the availability of private capital in the space for longer periods of time. “This in turn helps create more unicorns under private valuation metrics. This means there are no longer any doubts about the ecosystem in terms of value and returns,” adds Anand.

He adds that even three years back, India wasn't considered a top market, instead, people looked at China or others in Southeast Asia. Today, India is an open market with a young population of over a billion people, a global contender.

“This growth is indicative of a fundamental shift in the Indian ecosystem. On one hand, startups are creating jobs across the board generating both white and blue-collar employment. On the other hand, they are actively innovating to cater to emerging consumer needs. Unicorns have also played an important part in evolving the partner and stakeholder ecosystem, across business segments,” says Abhay.

He adds that another advantage of unicorns is that they build their own sub-ecosystems. Consistent business growth leads them to naturally expand into market adjacencies and explore M&A options.

Ruchi adds there has been an inflexion point in the Indian economy. “While economies have been down globally, COVID-19 showed that consumerism in India is significantly high. If you look at 25-35-year-olds today, they have a significantly higher disposable income than what the same age group had a few years back."

She explains the combination of several factors like natural progression, more capital, and a growing economy has contributed to a more bullish trend.

But what is the flip side?

“I see this technology-led startup ecosystem as an invaluable economic growth driver. However, in a highly buoyant ecosystem, one might be inclined to chase growth. It is important to balance growth and profitability metrics for optimal progress,” adds Abhay.

And with the growing number of unicorns in the ecosystem, does it mean the exclusivity of unicorns reduces? Anand and Ruchi clarify that it just means the focus will be towards making higher valued startups — decacorns (startups valued over $10 billion).

Ravishankar says if we assume the underlying value is what is reflected in the valuation, then building a billion-dollar company is a long term game. “It is a scenario where you are entering an elite top 100-200 scenario, especially when you compare this with any of the listed entities, and that is what makes it rare."

He adds, “The flip side is that chasing metrics becomes the business, versus actually building the business. And the metrics you measure cannot be the final outcome of a business. The focus then drops from building fundamental value, and that is when the problem arises.”

Thus, he explains, the focus should be more on ensuring valuation doesn’t become a vanity metric, but an underlying quality of businesses that create revenue and scale, and are profitable and enduring.

Varun says, “The increase in the number of Indian unicorns is a big positive for the country. It creates a virtuous cycle of business innovation and high-quality talent attracting global capital and know-how, which in turn encourages the next generation of entrepreneurs to launch new businesses. However, what is not healthy is the extreme focus on valuation alone and in seeking to achieve unicorn/decacorn status."

"This places extreme and unnecessary pressure on the entire ecosystem and in some cases could lead to making short term and unsustainable business decisions. We at Investcorp want our founders to concentrate on building businesses in the right and sustainable way, the valuations in our view will then follow,” he adds.

Today, the corrections in valuations are already starting, and Ravishankar believes there will be a slowdown in late-stage investments made this year. As a result, the number of startups getting into the unicorn club will also see a slowdown.

So this means, now when people go out to seek capital, they will see that valuations are lesser. For example, if this year you have X revenue growth, your valuation would too go up to 10X, but slowly you will see if you have 2X revenues, the valuation will not proportionally touch 20X, but may just go up by 12X.

“What you do not want is to have 100 unicorns and three years later, only half of those retain their unicorn status,” says Ravishankar.

The idea is to ensure that you stick to the promise you made to become a unicorn, he cautions.

(With inputs from Payal Ganguly)