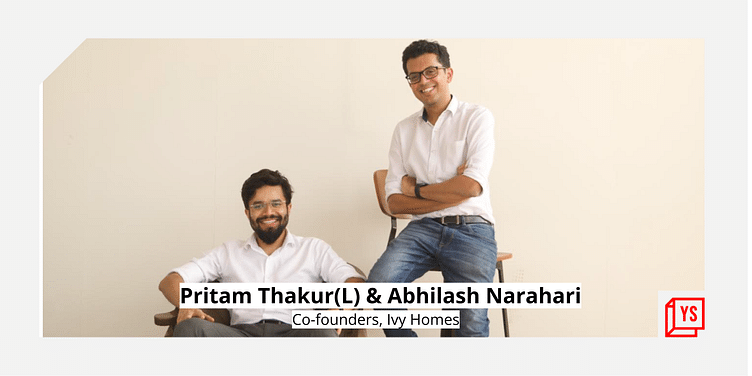 Bengaluru-based Ivy Homes is a new-age proptech startup that uses artificial intelligence and machine learning to ascertain a house’s fair value and buy it from sellers, finalising deals in two weeks.

There’s nothing much to write home about when it comes to selling a house. The crowded market, the repairs and maintenance ask, the legal process, and lack of control, especially around time and money, means endless uncertainty  - till the deal is done.

“We are looking forward to making this process easier for users, both buyers and sellers,” says Abhilash Narahari, Co-founder, Ivy Homes.

Started in 2021 by IIT graduates Abhilash Narahari and Pritam Thakur, ﻿Ivy Homes﻿ helps you home in on a deal almost instantaneously.

Unlike other proptech startups, it does not list your property up for sale. It sets up an inspection, makes an offer (in three days), and buys the house, cutting the time it usually takes to sell a home dwelling (about six months to two years) to approximately two weeks.

“We do this with our proprietary pricing model that allows us to estimate the fair value of each home,” Co-founder Pritam Thakur says.

“The homes we buy are refurbished and sold again. As a company selling houses that it owns, we’re also able to add a lot of value in the buyer experience from scheduled home visits to easier legal diligence and faster home financing,” Abhilash says.

He adds that the Bengaluru-based proptech startup aims to make the users’ journey convenient and valuable.

“We’d initially looked at building something on the data intelligence side but realised very soon that we need to own the transaction to really improve and enhance the consumer experience. This led to the launch of Ivy Homes. We are on track to acquire more than 100 homes by the end of the year,” Abhilash adds.

The startup has developed a pricing model that takes into account as many as 80 parameters to determine price.

“We’ve had to build ground up the data infrastructure layer, including details of past property transactions and various features of individual properties,” Pritam says.

Abhilash, who earlier worked at ITC, previously co-founded ecommerce marketplace Elanic, which was acquired by ShareChat. Pritam started his career at Rocket Internet, worked as a real estate developer for a while, and then led content operations at ShareChat.

“Our interest in real estate brought both of us together,” Abhilash says. The company raised its seed round of $5.8 million at the time of starting the company.

Duped by a broker, this IIM Calcutta alumnus started a proptech startup to ease the home buying process

There are numerous proptech startups operating in India’s buzzing market, but the fact that Ivy Homes offers instant liquidity along with a pain-free, sure way to sell a home stands out as a differentiator.

Abhilash says there are no direct competitors as there’s no proptech company that buys homes in the market. There are, however, multiple global competitors such as Opendoor, Loft, Habi etc, but none operate in India.

“The current companies operating in the resale real estate market are digital classifieds. They are discovery platforms as opposed to transaction platforms,” he states.

The startup’s algorithm considers variables like built-up area, proximity to schools and accessibility to transportation to determine a property’s best price. It also uses a 130-point checklist during the detailed home inspection, assessing aspects like quality of fixtures, plumbing, and electrical to establish the best price.

Ivy Homes is currently operational in Bengaluru. The startup claims to have acquired about 50 homes so far and sold half of them.

The typical seller on Ivy Homes is a homeowner upgrading his or her property or someone who has moved to a different city or country. “Our offering, in terms of time and liquidity, gives them a lot of value,” Pritam says.

The average home buyer is someone buying a house for themselves to live in (not an investor). It’s usually their first home purchase.

“Unlike most of the developed world, India doesn’t have a central information exchange for property transaction prices. So we had to build it ourselves. We’re a tech-first company and most of our initial hires were data scientists and engineers. We started building out the platform from last mid-year to be available in the market for users by the beginning of this year,” Pritam says.

Ivy Homes’ total team size is currently 26, and includes a mix of people from technology, real estate, and finance backgrounds.

“We have a spread between the price that we buy at and sell at, which is our monetisation model. We’re on track to do Rs 100 crore in revenue this year and look forward to attaining a run rate of Rs 500 crore by December 2023. This is the first year in operation (we officially launched in January 2022),” Pritam says.

According to Pritam, real estate is the largest asset market in India and the resale property market is accordingly extremely large.

“In the segment of homes targeted by Ivy, the resale market in the top 10 cities in India is Rs 4 lakh crore. Our value proposition (in terms of instant liquidity on a house) is really appealing to home sellers. Currently, such a service doesn’t exist and it allows us to stand out,” he says.

Ivy Homes is now planning to expand into other metro cities.