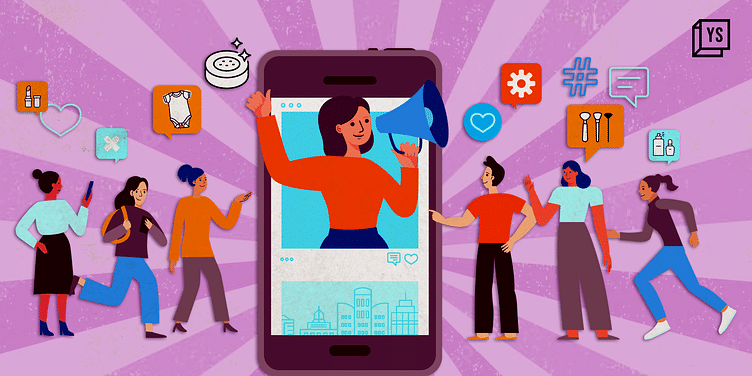 The Good Glamm Group is betting big on its content-to-commerce model. It has consolidated business into three verticals and is eyeing international expansion, and eventually an IPO.

It was 2020. Darpan Sanghvi, Founder of Mumbai-headquartered D2C beauty startup ﻿MyGlamm﻿, was trying his hand at the content-to-commerce model, and found himself struggling with the content side of things.

In another part of the world, Priyanka Gill, Founder and CEO of New Delhi-based ﻿POPxo﻿ and ﻿Plixxo﻿, was attempting the same model and found herself facing a difficult time with the commerce aspect.

Darpan struggled with customer acquisition while Priyanka couldn’t understand how to monetise content from the large user base she had created.

“We had a brief flirtation with POPxo products back in the day. We knew nothing about products. When Darpan saw a sheet of our products, he must have had a laugh because our MOQs were too low, our cost per unit was too high, and it did not make any sense,” Priyanka recalls.

The two entrepreneurs have come a long way since then.

In 2021, Darpan and Priyanka joined hands with Naiyya Saggi, Founder and CEO, ﻿BabyChakra﻿, to form ﻿The Good Glamm Group﻿. This new entity has three distinct functions—Good Brands led by Sukhleen Aneja, Good Media led by Priyanka, and Good Creator led by Sachin Bhatia—and is betting big on the content-to-commerce model.

The startup is now looking at international expansion, and making plans to go public. But more on that later.

Before this model, 90% of the startup’s traffic came through paid marketing channels and Good Glamm’s customer acquisition cost (CAQ) was $15-18. Today, its CAQ has come down approximately 94% to just $1.

“Content platforms today generate 4-4.5 billion organic impressions. These impressions are generated without spending any money, just by putting out great content. We insert our brands in 200 million of those impressions today. Through that, we get traffic to our website, and then transact,” Darpan says.

The FMCG company says of the 200 million impressions it interacts with, seven million are transacting on their website currently. Over the next three years, Good Glamm hopes to increase this number to 35-40 million customers.

In August 2021, the group acquired parenting platform and community BabyChakra to build the mom baby segment in the group and invest for Rs 100 crore (approximately $13.9 million) for the same.

The Good Glamm Group then topped up its Series C fundraise with a further Rs 255 crores ($34.6 million) infusion led by an equity investment from the Trifecta Leaders Fund and structured financing from Trifecta Capital and Stride Ventures.

The following September, the three co-founders announced the formation of parent company Good Glamm Group. The group then earmarked a Rs 750 crore war chest to make strategic investments in and to acquire fast growing beauty and personal care brands.

“I really think Good Glamm has cracked the code on integrations with a healthy mix of decentralisation and centralisation, and we can already see integrated companies growing 3x in revenues in six months. Also, Darpan has an innate ability to connect with like-minded founders and teams, and it gets everyone aligned with a much larger goal than one would have achieved by themselves, which I think really helps in acquisitions and integrations,” Andre says.

In March 2022, the spree came to a temporary close with BabyChakra acquiring the social media assets of Tinystep.

“We are cognisant of the fact that this could happen because it was 2021, and capital was available. We consider ourselves so lucky because it will be very hard for someone else to do it because it's no longer 2021,” Darpan says.

“In 2022, what we are doing is consolidating it all, and ensuring we get to profitability,” he adds.

“In retrospect, it seems perfectly put together content-creator commerce. It actually was an organising mechanism for our acquisitions. We were acquiring in logical buckets,” Priyanka says.

“Each of the verticals has to be profitable and standalone as entities of their own but importantly, all three verticals connect with each other in a very beautiful way. Content gives us the visibility and eyeballs that we need - 250 million users across platforms. In India every month, we access more than half the digital population of the country. Creators give activation and products lie with the brands,” she explains.

The four platforms continue to function independently with the back-end teams being centralised. With over 200 million users across digital media platforms, the company generates over 4.5 billion impressions, the startup said.

“In March or April last year, we decided let's own the content space, so let's go and get the best content companies out there so we have the maximum reach digitally. We also realised that influencers and creators are the way that consumers are discovering new trends, products, and brands. That is going to be the future. Content got us the reach on social media, and creators became the medium through which we could communicate with the consumers,” Darpan says.

Influencer platform Good Creator is an amalgamation of Plixxo, Winkl, Vidooly, Bulbul, and MissMalini’s influencer and talent management division. Tracking over 1.5 million influencers, Good Creator provides a single integrated platform for creators to earn, learn, and increase their follower base.

“This is a space that is quite cluttered, and a player who wants to dominate needs to have a unique proposition. How does the Good Glamm Group actually stand out is my question,” says Harish Bijoor, Brand Strategy Specialist, Harish Bijoor Consultants.

“I believe that they need to invest a fair bit in a very fine-tuned positioning that says I am this and nothing more than this. Because when you are everything to everybody, you are nothing to any one body,” he adds.

In July 2022, the startup set up its international division in Dubai, appointing Asad Raza Khan as Global Commercial Officer. Asad has over 17 years of experience at Procter & Gamble, with stints in London, Geneva, Dubai, and South Asia. In his last role, Asad led and built Art of Shaving’s global business and operations outside of the US.

The Good Glamm Group has earmarked an investment of Rs 100 crore for international expansion. The first market that Good Glamm is looking to target is Middle East as the audience there already interacts with its content.

“One white space that we want to fill is in men’s grooming because we have ScoopWhoop, and we do not have a men’s grooming product to sell through the billion impressions that we get every month. There are 45 percent men on Facebook and Instagram that we access every month organically through ScoopWhoop, and we still do not have anything to sell to them,” Darpan says.

The startup is in talks with several men’s grooming brands. However, it told YourStory that it is far from making any decisions owing to the slowdown in the economy.

In October 2021, Good Glamm had earmarked Rs 500 crore (approximately $66 million) for the men’s segment over the next two years.

The conglomerate is also looking to make an acquisition for its offline distribution channel. Good Glamm hopes to close these acquisitions within FY23.

The world’s a stage for India's bold, new D2C brands

In context of the current funding winter, YourStory asked the Good Glamm Group founders what they are doing for cash conservation.

“We all have to recognise that it is 2022, not 2021. Capital is no longer available. The macro environment now is starting to ask really strong questions on EBITDA rather than top line growth. Our earlier AOP for this financial year was to grow about 6x from April to March. We have toned it down to 3x. By doing that, we have focused on ensuring that we end the year profitably,” Darpan says.

Through consolidation, the startup also got rid of redundancies. It has also cut down the number of projects that it was working on.

On its vision board, Good Glamm has the words IPO 2024, in hopes to go public that year.

“Good Glamm will not have any issues going towards an IPO. But within the next couple of years the IPO market itself is going to be a very cluttered space with a large number of IPOs. If you really take a history of IPOs in tech-enabled spaces, you will see they have severe issues,” says Harish, of Harish Bijoor Consultants.

“IPO should happen at a time when customers are totally tied to you, your monetisation ability cannot be questioned by anyone, and when the entire thing operates with little or no human intervention,” Harish advises.

(This copy was updated to correct the total organic impressions, and to state that Good Glamm did not buy Baby Chakra for Rs 100 crore but is investing that amount to develop the mom baby business.)