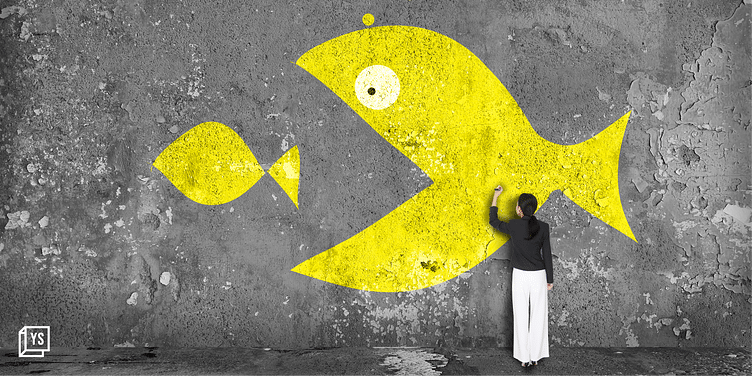 Industry experts say the second half of 2022 will continue to see a momentum in startup M&As as growth rounds become scarce and startups with strong balance sheets find the right targets at right valuations.

The overall number of startup acquisitions between January and December 2021 stood at 244, according to Tracxn.

H1 2022 also stood out in terms of large-ticket deals, with the acquisition of ﻿Blinkit﻿ by ﻿Zomato﻿ for $569 million in an all-stock deal announced in June 2022.

The data does not include mergers and acquisitions in the real estate sector, infrastructure development, airlines, auto OEM, steel and metal, solar energy and power plants.

Industry experts believe the second half of the year will continue to see a momentum in startup mergers and acquisitions as growth rounds become scarce, fuelling consolidation in later-stage companies, and startups with strong balance sheets find the right targets at right valuations.

“M&As and consolidation are definitely going to be the flavour of the season, if I may call it that. It is a direct fallout of the squeeze on late-stage funding,” says Anup Jain, Managing Partner at early-stage venture capital firm Orios Venture Partners.

He adds, “In terms of focus, investment activity in sectors that saw an upside amid the pandemic such as edtech, D2C, and teleconsultation has tapered off. Other sectors like climate, sustainability, and electric mobility have taken off after the pandemic.”

Even though startup investments saw a 54% year-on-year growth at $13.3 billion across 506 deals in H1 2022 over H1 2021 (with $8.6 billion across 327 deals), experts say consolidation in the late stage is likely to kick in as investors become selective over which company to back in a particular sector.

Mergers and acquisitions in 2022 will be skewed towards consolidating the market or creating market leadership, rather than adding new verticals.

“Late-stage consolidation was always the right strategy to form one large entity to unlock value and avoid duplication in target audiences. We have seen that with PharmEasy-Medlife and in ecommerce/taxi aggregators and other segments. This is getting accelerated in the current funding situation, down to even growth-stage companies,” Anup says.

All stock, cash, and mixed equity deals will dominate, as companies continue to be in cash-conservation mode.

Zomato’s acquisition of quick commerce company Blinkit - the largest deal of H1 2022 - was an all-stock deal.

“According to our data, in 2021, nearly two-thirds of the deals were mixed cash and stock deals, and a similar momentum will continue in 2022,” Vikram Chandrashekhar, Partner, Bain & Company, tells YourStory.

Deals in 2022 will be different from 2021, when the likes of heavily-funded edtech companies like BYJU’S and Unacademy made tuck-in acquisitions in areas outside of their core business.

Large business conglomerates such as Tata and Reliance will continue to make startup acquisitions to grow their digital footprint or build a digital business vertical through inorganic channels.

“The current cycle is more of a correction phase. Last year, we saw bull-run M&As in our parlance. These are mostly companies buying to grow faster. Capital was available and the buying company could always raise more money from the markets, as the market rewards such leaders for their consolidation play,” says Sumir Verma, Managing Director at investment banking firm Merisis Advisors.

He adds that while startup unicorns move to cash conservation mode, some deals will be pushed by investors looking to align their portfolio companies.

In June 2022, Tiger Global-backed ﻿Pristyn Care﻿, which offers a network of multi-speciality clinics for elective surgeries, acquired healthtech startup Lybrate, which had raised funding from Tiger Global and Ratan Tata in 2015.

Archit Gupta, Co-founder of fintech SaaS company ﻿ClearTax﻿, now known as Clear, earlier told YourStory that the company “..continued to look for more assets”. “It is directed either towards getting a good early-stage team or a good product.”

For companies looking to strengthen their market position, M&A in 2022 is as good a time as any.

Experts predict that acquisitions in the startup space will continue to see higher interest from domestic companies and startups, while enterprise SaaS, mobility, and fintech sectors will see more consolidation than others.

“Buyers with strong balance sheets and cash on their books should not sit it out, and should have a strategic playbook for acquisitions. Historically, we have seen that Indian companies that divested and consolidated during the financial crisis of 2008 outperformed their peers on earnings by a 2:1 ratio after the turbulence had passed,” says Vikram, of Bain & Company.

(With inputs from Amisha Agarwal)