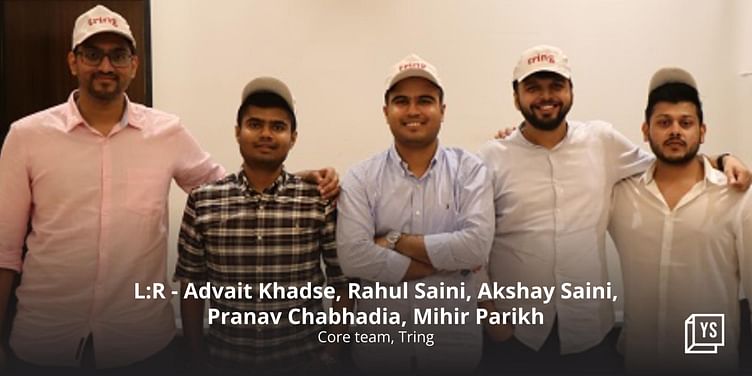 Tring will use the new funds for improving the product and to introduce other forms of celebrity-fan engagement, with a sharp focus on further monetising its customer base of over 200,000 customers.

﻿Tring﻿, a Mumbai-based celebrity engagement platform, on Thursday raised $5 million in a Pre-Series A round led by Kalaari Capital, which invested $2 million and has the option to further invest $2.5 million in a new tranche at a later date. The round also saw participation from Blume Founders Fund, Redbrook Pte (Singapore), and Sujeet Kumar (Udaan.com).

Tring plans to use the new funds for improving the product and introduce other forms of celebrity-fan engagement, and further monetise its customer base of over 200,000 customers.

Tring was launched in December 2019 by Akshay Saini, Rahul Saini, and Pranav Chabhadia with the aim of helping bridge the gap between fans and celebrities. The company claims to have over a million people visiting the website to interact with celebrities, and is hoping to notch 100,000+ paid transactions monthly soon.

"India is a huge market for celebrity engagement services with users demonstrating high fandom levels. We are working to make Tring the one-stop marketplace for all digital personalised interactions with celebrities in India and soon Asia. We are delighted to have robust institutions like Kalaari Capital joining us on this journey. Kalaari Capital’s strong belief in the creator economy makes them the ideal partners while we continue growing rapidly across Asia over the next few quarters."

Tring competes with international platforms like Cameo (US) and Memmo (Europe) that have witnessed rapid growth and have attracted massive user interest.

GOPIZZA raises $25M in Series C round to expand in India

“We are thrilled to back Akshay, Rahul and Pranav in their journey to disrupt the celebrity fan engagement space in India. The team has shown strong execution capabilities and brings deep understanding of the market opportunity. We are confident in their ability to build a leading fan engagement platform from India and we are proud to welcome them to the Kalaari family."