Despite teething problems, live commerce is here to stay 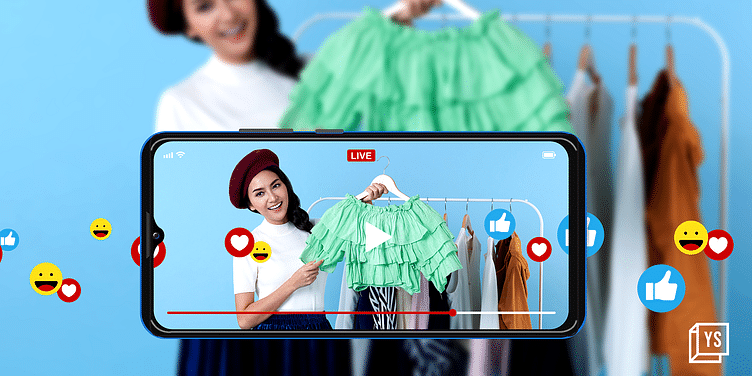 Live commerce is an idea whose time has come. However, financials, business models, and conversions are yet to be defined for the channel that is little more than a novelty in its current form.

Online retailers who have dipped their toes into the “live commerce” pool this festive sales season have found it to be a little too cold still, but they are confident that the experience will improve soon.

There are many advantages to live commerce—where influencers try on or showcase products real-time—that gives it an edge over traditional online sales, especially under certain conditions.

Live streaming gives the customers a better understanding of the product and the influencer’s style and delivery make the experience personal. The added advantage is that you really don’t need to be proficient in English—all you have to do is trust your eyes and ears (and the influencer) and click on that buy button.

While the “live commerce” experiments this festive season got a lot of attention, they did not convert into sales as much as expected. But industry experts are not too worried and say that these are just teething problems.

“Live commerce is inevitable,” says Kaushik Mukherjee, Co-founder and Chief Operating Officer of digital-first cosmetics brand ﻿SUGAR Cosmetics﻿. “It is not new; it is similar to teleshopping networks.”

SUGAR had participated in a live commerce session with fashion etailer ﻿Myntra﻿ and piloted one with beauty portal ﻿Nykaa﻿ and found the results promising. “It hasn’t taken off yet in India due to data constraints. The ecommerce product pages are static; you want [things] to load faster. Fast-forward five to 10 years, and we will see more people taking to it,” he says.

He adds that SUGAR aims to launch its own live commerce app in a year’s time.

SUGAR is not taking a blind bet. Industry forecasts are bullish on the channel’s performance. A report by ﻿RedSeer Consulting﻿estimates that India’s live commerce will see Gross Merchandise Value (GMV) of $4-5 billion by 2025. Of this, fashion is expected to contribute 60-70%, while beauty and personal care the other 30-40%.

The lure is so high that even automakers want a piece of the pie. Ecommerce marketplace Flipkart recently hosted its first-ever live commerce event for the two-wheeler category where automakers like Ampere, Bounce, BGauss and Hero showcased a wide range of petrol and electric two-wheelers.

Hero XTreme 160R Stealth 2.0—freshly minted by Hero MotoCorp for the Diwali season—was also launched through live commerce on Flipkart. The event saw over 2.6 lakh people logging in to see the new bike.

“We are witnessing an increasing adoption of live commerce since it was launched over four months ago, with more than seven million consumers and many brands participating in over 1,000 live streams till date,” says Dushyanth Jayanty, Vice President of Marketing at ﻿Flipkart﻿.

Interestingly, 65% of the customers joining live commerce on Flipkart are from Tier II and beyond.

﻿Amazon﻿ India also launched its live commerce feature with 150 content creators in September to coincide with the start of the festive season, and ﻿Meesho﻿ debuted live commerce during its sale days in the last week of the same month.

“We expect over 200 million online shoppers to be added in the next five years,” says a spokesperson from market consulting firm Redseer. ”Much of these users are coming from Tier II-plus and rural India. Live commerce reduces the friction for new users (who are relatively less digital savvy/less fluent in English). This will also coincide with an increase in content consumption.”

Influencers widen their reach by conducting these sessions in a mix of Hindi and English, benefiting customers from Tier II cities and beyond. This allows them to easily understand a product/brand’s features, usage or application, and price.

Live streaming can broadly be divided into four categories:

The number of online marketplaces joining the live commerce bandwagon has been growing in recent times with online ecommerce platforms such as Nykaa and Myntra piloting live streams with multiple products on their platforms.

“There are over one lakh high-quality influencers who actively work with brands across social media. Live commerce is still very small in India and cumulatively about 2,500 creators work across live commerce platforms,” says Apaksh Gupta, Co-founder and CEO of influencer marketing platform One Impression.

In the past 12 months, creator-led live entertainment commerce platform Roposo has expanded its reach to over 50 million consumers, enabling streamers to find audiences and unique entrepreneurial opportunities at scale.

Mansi Jain, Senior Vice President and General Manager at ﻿Roposo﻿, says: “We have been hitting up to 15 million viewers across categories, such as entertainment, current affairs, gaming, and commerce on a daily basis on the Roposo platform.” She says 8-10% of the viewers are now exploring the products during live shows, and that number is steadily rising.

But going by the hard numbers, the conversion into sales isn’t exactly worth writing home about. But that’s because it’s still early days.

If the success of Alibaba-backed Taobao Live in China is anything to go by, it is a matter of time before brands commit a steady part of their marketing and advertising budgets to live streaming.

“A lot of D2C brands are discovering that they have to play the retail market as well once they grow beyond Rs 100 crore, which is opposite to the DNA of being a digital-first brand,” says SUGAR’s Kaushik.

He adds that SUGAR sees a little over 50% sales coming from the offline channel, and expects around 5-10% of its online budget will be channelled to live commerce over the next few years.

“To make live commerce successful, everything should be as frictionless as possible.”

This is where the two-factor authentication mandated by RBI could be an issue. It takes too much time to buy an item and this could result in a potential customer missing out on the showcasing of other related products. “There is still a lot of friction in terms of payment in India.”

He says the products should be of lower Average Selling Price (ASP), and should offer additional benefits to make the offer lucrative. “An easy-to-sell product or exclusives bring customers and the temptation to place the order is high during the live stream.”

While ecommerce platforms refuse to quote a number, the Redseer spokesperson estimates that growth potential is high.

“In China, live commerce comprises nearly 15% of total ecommerce sales, while in India it is less than 0.5%. Fashion and beauty, as well as grocery as categories stand to benefit the most from the live commerce model,” the spokesperson says.

Given it is still early, fixed commercials or financial models are yet to emerge in the space.

“Since live commerce is so new, brands and platforms are keeping it lucrative for influencers,” says Ramya Ramachandran, Founder and CEO of influencer marketing agency Whoppl.

“Influencers have a rack rate for everything, be it collabs with brands, sponsored reels, or posts. Longer video content will be more expensive,” Ramya says.

Estimates indicate that influencers are paid anywhere between Rs 2-3 lakh for a 20-30-minute live session.

Live commerce is also helping brands understand their target audience via the real-time data and queries they receive during these livestreams. However, conversion rates are still low as compared to social media content.

While some online marketplaces work on a revenue-share or commission-based model depending on the sales, others work on fixed contracts with brands for a set number of live streams.

“Since many marketplaces are experimenting with formats, audience engagement and conversions, they are exempting brands from any extra payments for live streams. However, this is an evolving structure,” says an industry insider who did not want to be named.

Live commerce is on its way to becoming a fixed feature on multiple ecommerce sites as the focus shifts on bringing in Bharat users, and fashion and beauty take over electronics and mobiles as the leading category in terms of GMV.