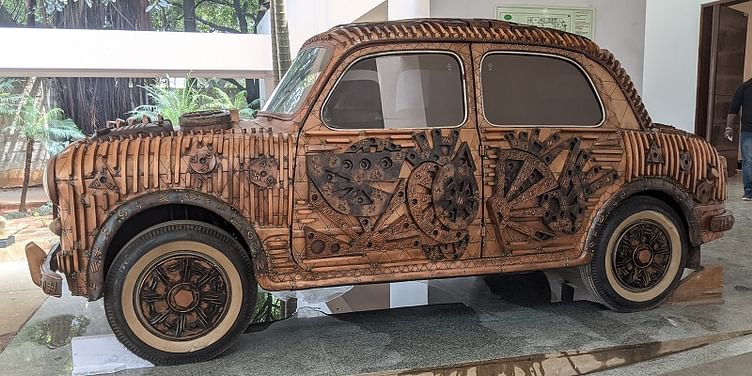 In this photo essay series, we showcase some of the outstanding artworks of multi-talented creator Yusuf Arakkal (1945-2016).

This showcase is the first-ever major retrospective of the renowned artist, with artworks spanning five decades. See our earlier coverage of NGMA exhibitions from 2015 onwards here.

The exhibition has been put together by the NGMA Bengaluru curatorial team and Yusuf’s wife Sara Arakkal, herself an art curator. See our earlier photo essay on Galerie Sara Arakkal in Whitefield, Bengaluru.

Yusuf was born in Kerala in 1945 and passed away in Bengaluru in 2016. As described by the exhibition curators, he ran away from his native place as a teenager and launched his creative journey in Bengaluru. He studied at Chitrakala Parishath College of Art, and also became a technician at HAL.

Yusuf described himself as a ‘figurative realistic painter,’ and has a huge body of works to his credit. Many of his works have been featured at festivals in India and overseas, spanning styles like oil, watercolour, graphics, collages, and sculptures.

“He successfully established a style and he focused on figuration when abstraction was the order of the day,” his wife Sara Arakkal says, describing the early steps.

Some of the artworks display his technique of restricted use of colours. Other works show how Yusuf departed from the solitude of human angst to celebrate the human form, especially the female body.

Other phases include Still life... with momentum (international explorations of urban notions), The icon of divine sacrifice (series on Christ), Celebrating feminine grace (strength and spirituality), Faces of creative solitude (pen and ink drawings of Indian artists), The power of lines (travel sketches), and Where man meets machine (inspired by his experience at HAL).

One of the outstanding exhibits is Yusuf’s copper car, Arto Mobile. He transformed his first car, the 1956 model Fiat Millecento, into a sculpture.

Symbols from the ancient Egyptian and Indus valley civilisations have been added to the surface of the car. This is a metaphor for the age of technology and machines, the curators describe.

(All exhibition photographs were taken by Madanmohan Rao on location at the gallery.)