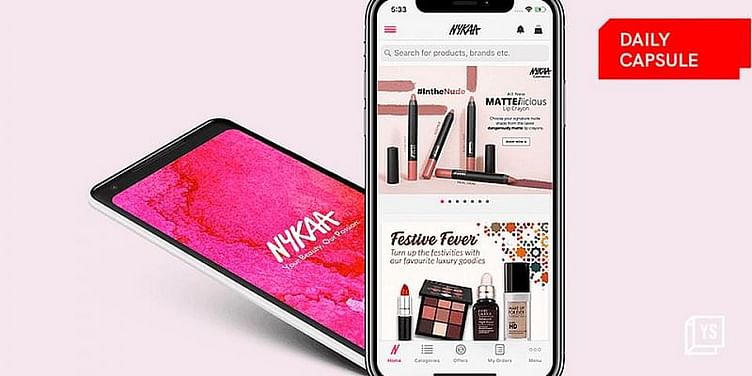 Online beauty retailer Nykaa is hopeful that a larger slice of the international brands pie and expansion of physical store network will drive growth in its beauty segment.

The markets started the week on a weak note as Sensex ended the day 638 points lower and the Nifty ended below 16,900. Except for pharma and oil, all sectors were in the red as global markets remain spooked by recession fears.

But the falling markets haven't dampened the shoppers who are out looking for the best deal out there during the festive season. Ecommerce giant ﻿﻿Flipkart﻿ has clocked close to $5.5 billion in eight days of the festive season, our sources told us.

The festive season also underlines the importance of the D2C ecosystem in India, and YourStory is committed to discovering, showcasing, and amplifying high-potential emerging D2C brands. Brands of New India’s "500 Challenger Brands" initiative is all set to release its final cohort of 100 challenger brands. If you think your brand stands apart from the rest, apply here.

ICYMI: A group of 26 women defied fears of harassment and cycled 200 km around Bengaluru. They weathered rain, traffic and waterlogging to highlight the issue of lack of toilets for women on highways and in villages.

Here’s your trivia for today: Which is the largest district in India in terms of size?

﻿Nykaa﻿ is doing many things at once—growing its premium global brands offering, taking its own brands to international shores, and adding more physical stores in Tier II and beyond cities—to make the most of the festive season and post-pandemic rise in consumer spending.

It hopes that its international brands business housed under its Global Store and its plans for physical stores will help it build momentum in the Beauty and Personal Care (BPC) segment.

The collapse of an acquisition

PayU Payments's much-awaited acquisition of BillDesk for $4.7 billion has been terminated, shortly after it was cleared by the competition watchdog, abruptly ending a potentially crucial deal for India's payments sector.

PayU's Netherlands-based parent, Prosus NV (previously Naspers), said in a statement Monday that the agreement was terminated automatically after certain conditions were not fulfilled by "the 30 September 2022 long stop date".

﻿Flipkart﻿ and its group companies, ﻿﻿Amazon﻿﻿ India, ﻿﻿Meesho﻿﻿, and other ecommerce platforms, which conducted sales during September 22 to October 1, reported significant demand from Tier II and III cities during the period.

Which is the largest district in India in terms of size?

Answer: With an area of 45,674 sq km, Kutch in Gujarat is the largest district in India. Its capital, Bhuj, was the epicentre of a major earthquake in 2001.