A pivot that helped Adda247 reach Tier II cities and beyond 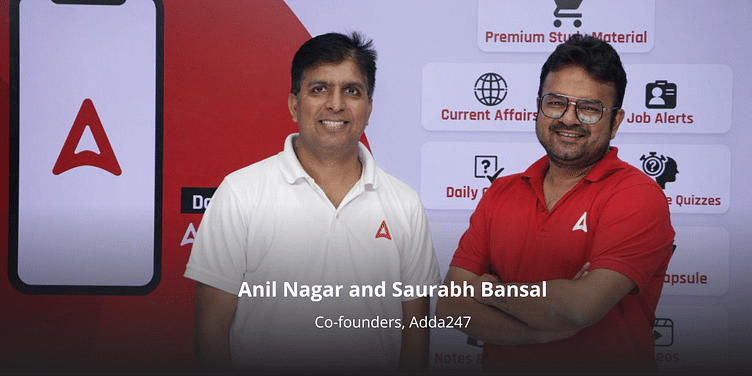 The Turning Point is a series of short articles that focuses on the moment when an entrepreneur hit upon a winning idea. This week, we look at government test prep platform Adda247.

Founded in 2016 by Anil Nagar and Saurabh Bansal, Adda247 caters to the learning needs of millions of students from Tier II and Tier III cities in India. It offers content in over 12 vernacular languages for more than 500 government exams, making it the largest edtech startup in the government exam preparation category.

However, the edtech startup’s roots lie in Career Power, a company founded in 2010 that provided offline coaching classes to students.

Hailing from UP and Assam, founders Anil and Saurabh say they have first-hand experience with how poor access to educational resources affects students in smaller towns.

"Coming from a smaller town, we faced the challenges ourselves,” shares Anil. “We saw a gap that we realised we can contribute,” he adds.

“Starting Career Power was not a business perspective for us but a cause to serve a community and help people coming from Tier II and III places,” he adds.

For at least two years or so, the founder duo was the instructors in Career Power’s Noida centre. By 2015, they had 100 branches across larger Tier I cities in India.

While Career Power had a successful run, the team realised that they could reach a limited number of students via offline mode. They could not reach the smaller regions which were their main inspiration to start an education company.

The final push to start an online platform came when Anil met a girl in UP who could not study for a government job as her family was reluctant to send her to a bigger city.

This made the founder duo start Adda247. The team built out a product that could be used in any device. However, the founders had to face several challenges to realise this dream.

“Our first challenge was to build a product that can be accessible in any device and not only high-end devices,” says Anil.

So the team focussed on building the app that would not only help with accessibility but also connectivity, where the student can download the content.

The company has close to two million paid users so far. The team claims it is growing fast while still being profitable and grew 100% in FY22.

Career Power is still functional (but in franchise mode) and has 20-30 branches, spread across major cities like Delhi, Lucknow, Kanpur, and Patna.

While edtech is moving to a hybrid, Anil tells the team will remain online.

“We did offline for quite a few years before we went online and we understand it quite well,” shares Anil.” For us it was a very conscious choice why we decided to move offline to online. So because we believe our vision is possible only if we go online mode.” Adda247 has raised $55 million in funding so far.

The team also plans to invest fresh capital to enhance its tech and product profile, expand its student counselling team, and hire for some key leadership roles.