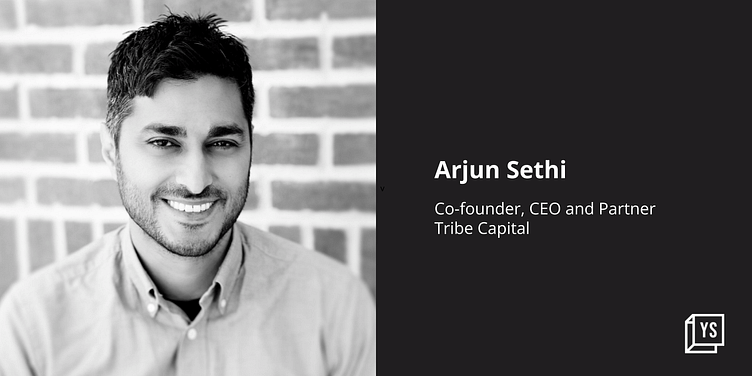 “Currently, we have $1.5 billion Assets Under Management (AUM) of which 20% is in India. You will see us double down in our (portfolio) companies as they continue to raise more capital,” said Arjun Sethi, CEO, Co-founder, and Partner at Tribe Capital.

He added, “You will see us invest large amounts in 5-10 companies over the next two years rather than back a large number of companies.”

Arjun said that in India, Tribe Capital will continue to back companies across stages as long as the opportunity is interesting. The fund backed SME-focused SaaS startup ﻿﻿TranZact﻿ in its Series A round in December.

Founded in 2018 by former Partners at Chamath Palihapitiya-backed Social Capital and former data scientists from ﻿Slack﻿, ﻿Airbnb﻿, and ﻿Facebook﻿, the firm has three venture capital funds, as well as two funds that invest in crypto and token-based opportunities.

In India, Tribe Capital has invested in startups such as logistics enabler ﻿Shiprocket﻿ trucking platform ﻿﻿﻿BlackBuck﻿, and financial services platform for Small and Medium Enterprises ﻿﻿KhataBook﻿. It continues to work on the commerce-enabler SaaS companies, across logistics, payments, digital ledger book providers, and others.

“India has skills to build software for not only customers outside of the country but also for India-specific problems,” said Arjun.

He added, “First and foremost, the expertise is going to go to commerce. Then, you saw products and services which serve Flipkarts and Amazons. Then, you have payments and lending, merchant products, building Shopify-like models for merchants in India, social shopping—these kinds of things don't happen by accident.”

While Shiprocket raised capital from the firm's first fund, BlackBuck and Khatabook belong to its Fund II portfolio.

A third fund of $335 million, which was launched earlier this year, is currently in deployment, but it hasn't started investing in the Indian ecosystem yet.

The technology-focused fund calls itself a qualitative fund as its investments are based on data-backed decisions. It has backed companies like cryptocurrency exchange ﻿﻿Kraken﻿ and ﻿﻿FTX﻿, capitalisation table management and valuation table software ﻿﻿Carta﻿, and software platform Docker, among others, globally.

“Our team has [previously] worked on growth, data science, and building infrastructure for companies like Slack, Airbnb, Facebook, Snapchat, Square, etc. When we started Tribe Capital, we took all of that infrastructure with us and vertically integrated it into how we think about investing,” said Arjun.

He adds that the fund typically asks for access to a SaaS company’s backend system instead of a traditional pitch deck and numbers.

“If you look at public companies in India, they go through a quarterly filing system where they are sharing their results. Private companies do not have that—you have to rely on releases, statements, tax statements but those don’t tell you anything other than revenue,” he added.

With this approach, Tribe Capital intends to keep the science ahead of the art of investing.

Tribe Capital does not have an India presence or a dedicated fund and invests through special purpose vehicles in Indian startups. While the fund will continue to operate out of the US, Arjun does not rule out the possibility of an India-specific fund.

“We have been good at deploying out of our core funds and creating special vehicles for opportunities. We have had conversations with folks on the ground to work with us as well. We won’t make any hasty decisions as we have a very specific approach,” he said.