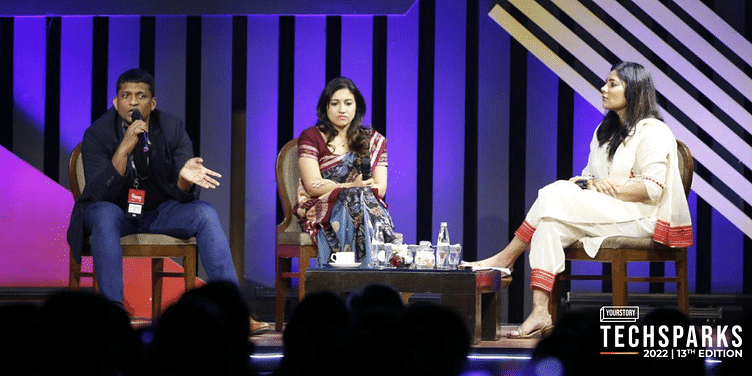 Byju Raveendran is unfazed about his company's losses in the previous financial year, and is confident that his edtech company will pull it back in FY 2021-22.

The edtech company ﻿BYJU'S﻿ booked a staggering loss of Rs 4,588 crore in the latest financial year. But Byju expects a revenue growth of 3X and losses to be halved in the 2021-22 financial year.

"Wait for (FY) 2022 numbers to come out; we just finished our best six months," said Byju, in a no-holds-barred conversation with Shradha Sharma, Founder and CEO, YourStory, taking on some tough questions on day two of the TechSparks tech-startup event.

Not deterred by the criticism that has come his way in recent times, Byju spoke passionately about his company's strategies and vision and also the mistakes the company has made. In fact, he seemed pumped up to tackle all the tough questions that he expected to be asked. At one point, he even got up from his seat to directly address the gathering of startup entrepreneurs and investors.

Addressing the recent losses, Byju said those were due to decisions taken by the company during the pandemic when its banking and non-bank partners stopped supporting financing. BYJU'S started lending from its balance sheet and extended the moratorium on financing.

The repayments or collections of these debts were completed only in 2022, which made the FY 2020-21 losses look worse than they were, he said.

When BYJU'S started broadcasting live classes for free in the first year of the COVID-19 pandemic, "auditors took it as streaming, though it was free, and it got marked in the costs," Byju explained.

Asked about investments due from Sumeru Ventures and Oxshott, Byju confirmed the two firms had not invested in BYJU'S yet, and pointed out that, because of macroeconomic conditions, a lot of deals had not closed.

BYJU'S was expecting a $250-million capital infusion from venture capital firms Sumeru Ventures and Oxshott by the end of August 2022, which was delayed due to "macro-economic reasons".

"Sumeru and Oxshott not investing is not our fault," he said, noting at another point in the conversation that, in the current economic environment, investors tend to tighten their purse strings.

Byju Raveendran apologises to 2500 employees who were laid off

The startup had announced a $800-million fundraising round in March 2022, at a valuation of $22 billion, with Byju putting in half of the total amount—$400 million—back in the business.

"If you give me Rs 100 also, I will put that back in BYJU'S. When you are privileged enough to make such a big impact, it is criminal to become complacent."

Talking about the layoffs at the edtech startup, Byju said it was as painful for the company as it was for those who were affected. On the other hand, he added that in business functions that were scaling up, the startup had hired 1,500 people last month.

"In one year, we added 25,000 jobs, and we plan to add 10,000 teachers more," said Byju. Co-founder Divya Gokulnath, who was also part of the fireside chat, called the layoffs "unfortunate" and explained that it was done to "remove redundancies".

"What Divya and Byju want is not what BYJU'S the company wants," she said.

On the company's recent partnership with football legend Lionel Messi for its social impact arm at a time when it had let go of people, Byju said, "We are not insensitive people. It (talks with Messi) happened six months ago. It is a social impact partnership."

After building the company for 18 years, the teacher-entrepreneur said he was geared up to do this day in and out for 30 years more.

"I'm the largest investor in the company, not just a shareholder. There's no scope for short-term optics. Just like anyone else, when you grow this fast, we've made our fair share of mistakes and we're sorry about it."