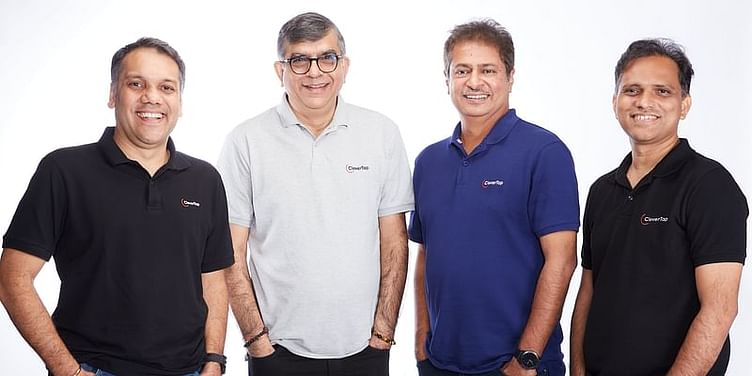 CleverTap, which earns over 60% of its revenue from enterprise customers, hopes that the early-stage startup segment will contribute 20-25% of its ARR in the next two years.

﻿CleverTap﻿, a SaaS-based omnichannel customer engagement and user retention platform, launched 'CleverTap for Startups' (C4S)—an initiative to enable small businesses to use their product to scale much faster in the hopes of becoming the company’s high-ticket enterprise customers.

Betting on pre-stage and early-stage startups, CleverTap said its initiative will allow them to use their platform to “personalise and optimise all customer touchpoints, improving user engagement and conversion” at lower price points. Typically, these companies are required to be app-based or soon-to-be operational through an app to see data/insights getting generated by the platform.

The SaaS startup hopes these businesses will contribute to about a quarter of their annual recurring revenue (ARR) in 2024.

“It will become a very significant source of revenue for us. I would not be surprised if this contributes to about 20-25% of CleverTap’s ARR in the next two years (2024),” said Anand Jain, Co-founder and Chief Product Officer, CleverTap.

The company is looking to end the current fiscal year with an ARR of $90 million, with the hope that it will increase it to $150 million in 2023. It believes that the initiative will contribute to about 5-7% of its total ARR in 2022 and about a tenth in 2023.

Anand Jain talks about the inspirations and idea behind CleverTap

Earlier, CleverTap didn’t actively target customers with low-ticket sizes but would onboard them in case they came as inbound leads. With this initiative, the company will now target startups that would contribute to the lower spectrum of their ARR with the hope of helping them scale to become enterprise customers, thus making a positive impact on the higher end of their ARR contributions.

In 2021, CleverTap turned EBITDA (earnings before interest, taxes, depreciation and amortisation) positive. Since the company has invested in growth—through product, marketing, and go-to-market, in addition to acquiring its competitor Leanplum, a San-Francisco-based multi-channel customer engagement platform this year—its EBITDA is negative again. However, Anand says that the company is likely to be EBITDA positive again in another 18 months or so.

“We were a young startup once and we relied on the kindness of strangers. There was AWS (Amazon Web Services) and all sorts of building blocks for us. We saw that there are a lot of young startups wanting to use a platform like ours but there is nothing available for them,” said Anand, commenting on their startup initiative.

He added that most products display monthly pricing but require annual commitments and are largely focused on small and medium-sized businesses.

“In CleverTap, we have seen some of the largest brands in the world, whether it is Jio or Paytm in India, there is Photomath, Gojek in Southeast Asia—users at massive scale. The thought was 'can we provide the same platform and the same power', 'can we democratise access to the platform to smaller, younger startups at a much more affordable price point with no annual commitments,'” explained Anand.

The startups have the option of cancelling their subscription if they do not like the platform or find value in using it.

CleverTap started working with startups early last year to understand if this initiative would be feasible. It had to tweak the product it offers to its enterprise customers into something that is a self-serve or do-it-yourself platform for early-stage startups. For instance, they are more likely to use the platform to find their product-market fit rather than signing a big service contract.

Initially, the company onboarded a few customers by hand. CleverTap observed increased usage of their platform by early-stage startups once the initial crinkles were ironed out. Anand claimed that over a quarter of the total user base of startups (1,000) who were onboarded on their platform have now moved on to become enterprise customers.

This set of early-stage startups who are now CleverTap’s enterprise customers are mainly from India and the US, and belong to sectors including health and fitness and fintech.

“This was a huge realisation for us. If you give a platform like CleverTap, the smaller startups not only discover product-market fit but they are able to identify the most profitable users instead of trying to spend money and acquiring users blindly,” said Anand.

This encouraged CleverTap to sign up with venture capital firms and incubators who can ask their portfolio companies to sign up with the former’s platform. They now have joined hands with 50 partners including Silicon Valley Bank, Sequoia Surge, and Y Combinator.

The company raised $105 million in Series D funding led by Canada’s pension fund Caisse de dépôt et placement du Québec (CDPQ) and participation from IIFL AMC’s Tech Fund, Tiger Global, Sequoia India, and Recruit Holdings in August this year. It was valued at about $775 million, almost double of its valuation of $385 million in 2019.