TechSparks 2022: Pitfalls to avoid on the path to scaling 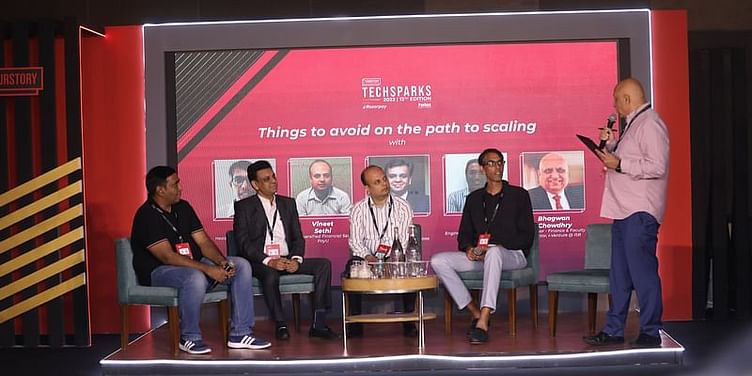 Speaking at a panel discussion at TechSparks 2022, four startup ecosystem thought leaders share their first-hand perspectives on the nuances of scaling and what to avoid on the path to scaling.

The need to scale your startup is a positive sign that tells you your company is on the right track. Scaling a startup is an exciting process that has the potential to bring significant success to both your business and the founder and significant professional satisfaction to those involved - if done rightly.

That said, scaling a company isn't an easy thing to do, as the many changes needed can derail even previously successful businesses. For one, the last five years have proven to be a masterclass in change for Indian businesses.

For startups, a tough market makes access to finance considerably more difficult. However, cash is not the most crucial aspect in determining success. It also lies in the product or service that has the ability of introducing innovative businesses or new market segments.

In a freewheeling conversation conversation with Bhagwan Chowdhry, Professor - Finance and Executive Director - DIRI Indian School of Business, top experts from the ecosystem including Vineet Sethi, SVP - Diversified Financial Services, ﻿PayU﻿; M Naveen Kumar, Engineering Program Manager, ﻿NetApp﻿; Gaurav Goel, Country Head - Emerging Large Corporates, YES Bank; and Dev Ramnane, Head of early-stage startups – India, AWS; weighed in on the panel titled ‘Things to avoid on the path to scaling'. Here are the key takeaways from the panel on how startups can strategise to build a stable business for the future.

Your growth can scale, but so can your errors

Vineet who manages the SME and insights business at PayU opined that scaling up was one of the hardest things to do. He was the Chief Marketing Officer at ﻿NIYO SOLUTIONS﻿ and was instrumental in building and scaling Niyo Global and NiyoX.

Vineet believes that being prepared is paramount. “Just as growth and revenues can get magnified during scaling up, so can errors and mistakes,” he said.

“Have a checklist, and have EVERYBODY in the office invested in the scale-up, and not just the core teams involved,” he advised.

Naveen, who leads NetApp’s global startup program called NetApp Excellerator and works with the startup ecosystem by identifying and nurturing startups, advised scale-ups to keep data at the core.

“Decision making has to be based on data,'' he said, while also expanding on how at the core of questions about scaling data was the same common mistake: viewing data as a team to hire or set of tools to implement — instead of a strategic lever for growth.

“Adopt a data-centric operating model to help all things IT run smarter, faster, safer, and with fewer pants-on-fire moments,” he advised.

Leverage your bank to be more than a bank

Gaurav, who has played a crucial role at YES BANK in onboarding and offering a diverse set of banking solutions to leading unicorns and soonicorns advised startups to look at banks as more than just a banking partner on their scaling journey.

“We work with several startups, and many of the startups we’ve met aren’t aware of how they can leverage the bank to be more than a bank ,” he said.

He also mentioned that startups working with YES BANK through innovative initiatives like YES SCALE Marketplace - an industry-first online marketplace of innovative solutions that eases the process for startups to jointly go-to-market with YES BANK with access to more than 200 YES BANK APIs, investor connections, go-to-market support, mentorship by 100+ sectoral experts and more.

Dev, who leads the startup segment for AWS in India, advised founders to put playbooks before people, when going on the zero to one journey - and not go on a hiring rampage before the product - market fit was in place.

The advantage that startups have over enterprise-scale organisations is that they can move fast, deal, try new things and experiment with greater flexibility before they scale.

Once you’ve actually reached product-market fit, you can begin optimising your core product, hiring specialists to increase your efficiency, and make strategic investments. “With a good product-market fit in place you’ve already made it further than most startups ever dream,” he added.

Vineet, who manages the SME and insights business at PayU, spoke about the most common challenges he’d seen startups face when it comes to scaling, and opined it was better to fail in the early stage than failing late.

Drawing from the move-fast-and-break-things approach to work and innovation, he advised leveraging early stages to focus on speed and experimentation before scaling up. He added that it was more worthwhile to make mistakes and disrupt technologies along the way in the early stages when the stakes are not too high than to play it safe at a slow and steady pace - which was more suited to enterprise-scale organisations.