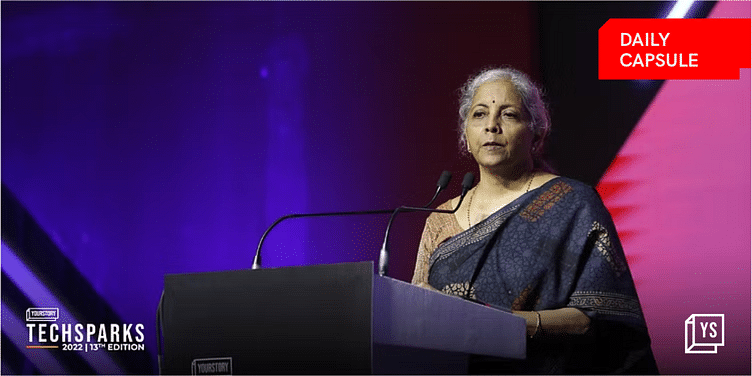 Union Finance Minister Nirmala Sitharaman capped off India’s most influential startup-tech summit with great poise as she spoke about the country’s revolutionary tech stack and how startups can power the nation’s growth. At one point, she doffed her hat to the founders present in the audience, calling them India’s “economic freedom fighters.”

Also participating on Day 3 of TechSparks 2022 was ﻿Polygon﻿ Co-founder Sandeep Nailwal, who described Web3 as a horizontal technology for decentralised computing, and a movement that can create global community-owned businesses out of India.

﻿Physics Wallah﻿'s Alakh Pandey then spoke about his plans for the unicorn startup saying he'd like to focus on educational content in regional languages.

Click here to read more about the events on Day 3.

In other news, Reserve Bank Governor Shaktikanta Das said he was optimistic that the inflation print for October would be lower than 7%. Retail inflation in September had increased to 7.4% from 7% in August due to higher food and energy costs.

ICYMI: Comic Con India is returning to the country after a two-year hiatus. The event will begin with Bengaluru, as the ninth edition of the convention will be held on November 19 and 20.

Here’s your trivia for today: Before Apple, iPod creator Tony Fadell had his MP3 player idea rejected by which two companies?

On the final day of TechSparks 2022, Finance Minister Nirmala Sitharaman highlighted the government’s crucial role in India’s growth as a technology powerhouse by encouraging public-private initiatives such as India Stack.

“The government is committed to ensuring that the digital framework and technology-based solutions will be [for the] public good and available for everybody to use," the finance minister said.

No one is more hyped about India's Web3 push than Polygon co-founder Sandeep Nailwal, who has high hopes for the country to lead the global push towards decentralisation.

“India can become the digital goods manufacturing factory of the world if we focus on Web3. It is a once-in-a-generation impact and wealth-creation opportunity," he said in a fireside conversation with Shradha Sharma, Founder and CEO of YourStory.

Jumping on the opportunity:

Naukri.com owner ﻿Info Edge (India)﻿ said its second-quarter income increased by 51.22% from a year earlier to Rs 531.82 crore, while its EBITDA, or core earnings from operations, swelled 66% to Rs 184 crore.

Before Apple, iPod creator Tony Fadell had his MP3 player idea rejected by which two companies?