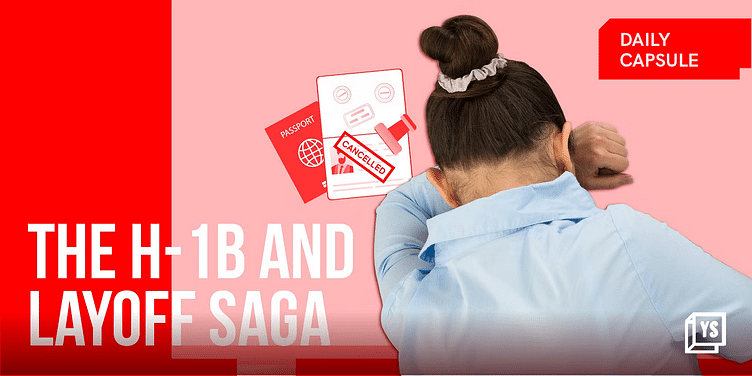 The H-1B visa allows US companies to temporarily employ foreign workers in speciality occupations. If their employment is terminated, H-1B visa holders have a grace period of 60 days to find another employer/job.

Disrupt or get disrupted.

For professional illustrators, AI image generators like DALL·E 2 may look like the enemy but Adobe is embracing the change. Armed with the belief that technology can only enhance creativity, the company’s stock service will now accept AI-generated images, reported Axios.

Oh, and you are as old as you feel, says science…adding that there is a link between our “subjective age” or “psychological age” and our health and longevity. The solution is obvious: Make yourself feel young.

But can our ‘psychological age’ fluctuate depending on our moods?

Here’s your trivia for today: When did the first McDonald’s outlet open in India?

With major tech companies including ﻿Twitter﻿, ﻿Amazon﻿ and Meta announcing mass layoffs, how are H-1B visa holders, who have either been laid off or are living in fear of being let go, coping with the uncertainty?

While most electric vehicle makers in India focus on e-scooters, Bengaluru-based ﻿Ultraviolette Automotive Pvt Ltd﻿﻿ chose to build an electric superbike. It took the company almost six years to unveil its much-awaited F77 at a recent event in KTPO Centre, Bengaluru.

The F77 is available in three variants: Airstrike, Shadow, and Laser. The current iterations come with a top speed of 152 kmph with an acceleration of 0 to 100 kmph in 7.8 seconds, placing the bike in direct competition with Energica EGO+/RS, Harley Davidson LiveWire, and Lightning LS-218.

Ever come across an article or a video, which you later realised provided incorrect facts? With social media emerging as the primary source of news, misinformation can spread like wildfire. Blockchain tech startup ﻿Fact Protocol﻿ has now made it its mission to check fake news and become the “Wikipedia for fact-checking.”

When did the first McDonald’s outlet open in India?

Answer: 1996, at Vasant Vihar, New Delhi. At present, it has more than 300 stores across the country.