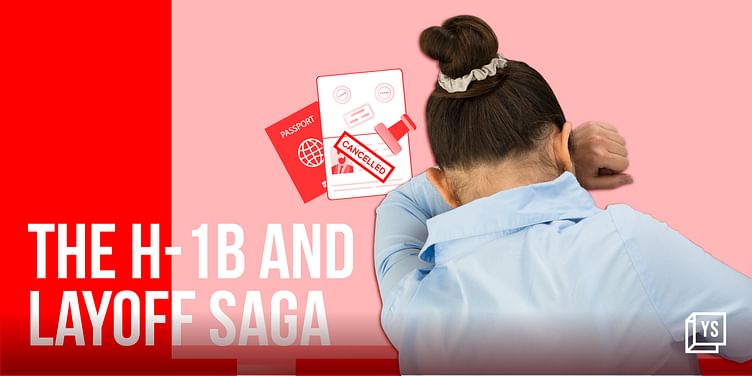 Thousands of Indians in the US have either lost their jobs or are living in the fear of being let go with major tech companies such as Twitter, Meta, and Amazon announcing mass layoffs in the last few months. What is the way ahead for these H-1B visa holders?

Around June, Satish (name changed to protect identity), an H-1B visa holder who resides in the US, heard a rumour that the company he worked for could lay off “low performers”. He immediately contacted his managers but was assured that all was well.

However, a few days later, Satish got the dreaded call from his HR department. He was told that his performance was sub-par and was given two options: a mutual separation agreement after two weeks or a performance improvement plan, after which the company would evaluate his performance and decide if he should stay or be let go.

“The second option was a little weird because the clause stated that even if you clear the performance plan, the company could terminate you anytime in the next year without any severance or benefits,” says Satish.

Finally, he didn’t choose either of the options and instead took a mental health leave, post which he could make a decision.

Satish admits the break is for both mental health and also to buy time. But finding a job in a few months is stressful, he says, comparing his situation to a “ticking time bomb”.

The H-1B visa allows US companies to temporarily employ foreign workers in specialty occupations. If their employment is terminated, H-1B visa holders have a grace period of 60 days to find another employer/job.

India is usually the biggest beneficiary of the H-1B visas granted by the US. The country bagged 3.01 lakh of the allotted 4.07 lakh H1-B visas between October 1, 2020 and September 30, 2021 (the fiscal year US follows). Around 3.02 lakh applicants from India are in the waiting list for FY22.

Satish is among the thousands of Indians in the US who have either lost their jobs or are living in the fear of being let go as major tech companies, such as Twitter, Meta, and Amazon, have resorted to mass layoffs in the last few months.

According to layoffs.fyi, a crowdsourced database that tracks job cuts in the tech industry, 1.4 lakh employees have been laid off in 2022, across 916 companies (as of December 6).

Sophie Alcorn, Founder & CEO, Alcorn Immigration Law, estimates that about 15% of the people laid off are H-1B visa holders.

These are no doubt stressful times for Indians in the US. People who have been laid off have been frantically reaching out to immigration attorneys to understand their position. They are also in touch with recruitment agencies and HR consultants for possible job openings.

Immigration attorneys are flooded with queries on the grace period of stay, changing visa status from H-1B to B-1 (for business purpose), reactivating H-1B, and getting a Green Card,  which allows one to live and work permanently in the US.

In June this year, Soundarya Balasubramani, co-author of the book Unshackled: A Guide for Highly Skilled Immigrants in America, had sent out an email to 3,000 people on her mailing list, with the subject line ‘A book on immigration to help people like you’. She says the open rate for the email was 78% and she received 300 queries in response.

“Some of the emails people sent were elaborate, explaining how frustrated they were with the immigration system and that they need to find a way to get the Green Card faster, or they want to start a company and they don’t want to wait for 10 years to do that.”

The US came very close to reforming the immigration laws of the land a few times but nothing has come to fruition so far.

According to HR consultants, many people also want to come back to India. Nirupama VG, Managing Director, Ad Astra, a Bengaluru-based HR consulting firm, says, “Even people who are stable are a little worried; whoever feels they are next in the line are starting to talk (to us).”

Thrown in at the deep end

With the US job market slowing down, this is not a great time to find oneself without a job.

There is fear and uncertainty in the minds of Indians in the US on employment statuses other than Green Card/Permanent Resident Card.

“Even within the 60 days, you have to have an offer letter in hand maximum by day 45, because it takes at least 15 days for the visa to be transferred to the new employer,” points out Abhishek Gutgutia, Founder and CEO of Sesame3, which runs the Zeno platform to help people laid off in the US with lawyers, mentors, and jobs.

Sonal Sharma, Founding Member, Sharma Law Associates, highlights another situation wherein some people may have even less time to look for another option. People have 60 days or time till the I-94 expiry date, whichever is shorter, she says.

Form I-94 is the arrival/departure record issued by the Department of Homeland Security to anybody in the US on a temporary visa.

Emotionally, the situation has taken a huge toll on many H-1B holders.

Anand (name changed), another H-1B holder from India, who was given a termination notice recently, says, “The pickings are slim … There is intense competition for all roles. Even highly qualified people may have to settle for jobs below their skill and pay level. But it’s not easy to downgrade.”

Although Anand is trying to put up a brave front, he says not many people are able to handle things. “The situation requires a lot of resilience. People have to be aggressive in their search (for jobs) but they are not able to do so. I know someone who cannot tell their parents they got fired because they are sick. Some families are pressing their children to act with urgency.”

On the other hand, Atal Agarwal, who lost his job in November, seems to have taken things in his stride. In fact, he even sounds a tad philosophical. “There are always things that can bring us down in the world. But then there are all those things that we need to be inspired by to live a good life. And I want to be more of a source, where I can inspire others through my work,” he says.

Atal, who recently completed the Ironman Triathlon, says he is open to doing anything that he finds “meaningful”, irrespective of where he is.

Meanwhile, colleagues and friends are doing their bit to help those in need of jobs. Informal lists of job openings and other resources are being collated and circulated online. LinkedIn is also being used as a sounding board, with people sharing their stories and reassuring each other.

In a spillover effect, grad students and freshers in the US are also being impacted by the current scenario.

Tina (name changed), a computer engineering grad student from NYU, had given interviews with both big companies and startups and was waitlisted as well. But she has now been told that she would get an offer letter once the team gets funding. She says many of her friends at NYU are either waitlisted or rejected. Some of them are also taking up jobs at a low pay to maintain their OPT (Optional Practical Training) status, she says.

What are the various options that H-1B holders can explore?

Jobs in the US

Abhishek of Sesame3 advises people to look at jobs in startups and teaching positions in small universities.

According to HR consultant Nirupama, smaller IT firms in the US are open to hiring and want to attract talent. “They have approached us to see if we have suitable profiles and if people (in the US) have approached us for placements.”

Contract jobs are another option and they could open up in all roles, across the board. Nirupama advises candidates to pursue temporary jobs (with 6 to 12-month contracts) to tide over the immediate crisis and then go back to a longer career.

On the visa front

Immigrations attorneys are busy helping people tide over logistical challenges and plan the next course of action.

In the event of not finding another job in the US, one can apply for an H4 dependent visa, if their spouse holds an H-1B. People whose I-94 duration is shorter than their H-1B duration could apply for B-1 (for business) or B-2 (tourism) to buy time, according to Sonal.

People with particularly high levels of skills and abilities in their field can qualify for an O-1 visa. The applicant must be able to show far above the average level of training in their area of expertise and be leaders in their field of work.

People can also self-petition a Green Card through EB-1A or EB-2 NIW categories, although getting a Green Card could take years.

Setting up a startup after being laid off, within the grace period, is certainly not going to be easy.

Prakash Goswami, Founding Managing Partner, Marl 5G Accelerator, which invests in very early-stage startups, says, “Setting up a startup may not be the favourable route unless they had been working on a prototype or proof of concept, for which they need to find an investor. If they don’t have any idea or haven’t created anything before, it might be a little challenging, especially as time is a constraint.”

If candidates are considering jobs in India, they may have to scale down their expectations, as the job market in the country is facing its own set of challenges.

Nirupama of Ad Astra believes candidates must choose jobs that suit their profile, at the market rate, rather than looking at a big raise, which could be “stressful”.

Some people are also looking to relocate to Canada, where one can become a permanent resident (PR) in about two years and a citizen within five years, according to Sonal. A lot of big tech companies have offices in Canada and provide a lot of work flexibility that allows those with PR status to work with more than one employer or run a business on the side, she says.

The current crisis has come as a wake-up call for both employers and employees to set realistic goals and expectations and not take anything for granted. It has also raised questions on the entire hustle-hire-fire culture in the corporate world and emphasised the need to handle situations with empathy and sensitivity.