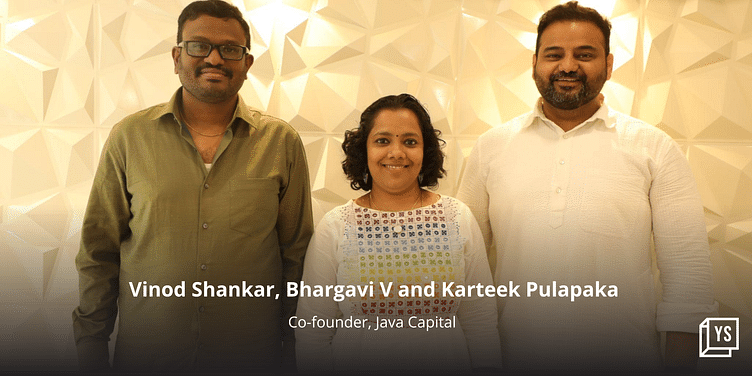 Java Capital is scouting for startups looking to raise pre-seed to pre-Series A funding across the deeptech, SaaS, enterprise tech, fintech, and climate and sustainability verticals.

﻿Java Capital﻿, a seed-stage focused SEBI-registered Alternate Investment Fund (AIF), has announced the launch of its first fund with a corpus of Rs 75 crore, including a greenshoe option of Rs 25 crore.

The fund has achieved its first close at Rs 30 crore and expects to do a final close in the next six months. The newly launched fund has already started investing in pre-seed to pre-Series A startups and plans to build a portfolio of 15–20 startups with an average first cheque size of Rs 2 crore. The fund will reserve 50% to make follow-on investments into top performing portfolio companies.

The fund, which has already invested in four companies, is eyeing startups looking to raise pre-seed to pre-Series A funding across deeptech, SaaS, enterprise tech, fintech, and climate and sustainability verticals.

Vinod Shankar, Co-founder and Partner, Java Capital, said, “We are possibly one of the only funds with strong diversity with three full-time partners and are led by deep conviction in the companies we invest in. We are not afraid to lead rounds ourselves at this stage, which is again led by our deep conviction and contrarian to most other funds in this market.

"We are willing to take outlier risks such as Agnikul, a company making India’s first 3D printed semi-cryo rocket engines, or EPlane, which is building electric flying taxis."

Java Capital was founded in 2020 by career venture capitalists and startup ecosystem enablers Bhargavi V, Vinod Shankar, and Karteek Pulapaka. It has led rounds in 40% of these companies. More than 50% of the portfolio raised follow-on funding.

Four companies were selected into the Y-Combinator accelerator after Java’s investments into them. As of now, the combined valuation of Java’s portfolio is $385 million.

Bhargavi V, Co-founder and Partner, Java Capital, says, “We are super excited to announce the launch of our fund and we are strong believers in the long-term growth story for India. We are in the venture space for the next couple of decades and would like to grow Java Capital as the first port of call for founders looking to start companies.”

Karteek Pulapaka, Co-founder and Partner, Java Capital, said, “India is in the midst of a once-in-a-century transformation and this will be underscored by cutting-edge startups. We have a strong record of backing and nurturing visionary founders developing disruptive business models and technology."