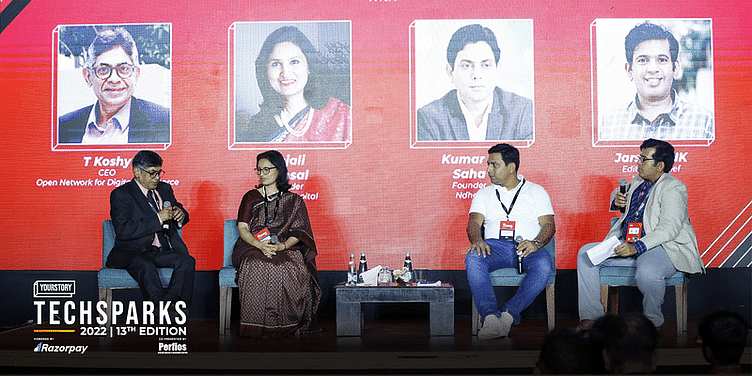 “The ﻿Open Network For Digital Commerce (ONDC)﻿ is not a platform. A platform suggests that to transact, everyone has to be in a closed loop. ONDC by design is a network of networks. So it is completely open access, it's unbundled and interoperable,” clarified Thampy Koshy, CEO, ONDC, dispelling some of the issues in the minds of businesses around ONDC.

Thampy highlighted that ONDC is not a platform but a list of protocols enabling the exchange of products and services. There is no central platform; it only allows multiple platforms to talk to each other. Anybody who has a product or service to sell can make it available in the open network that any smart buying platform can access. Thampy was speaking at a panel discussion titled ‘The network effect: ONDC & India’s ecommerce’ at TechSparks 2022. Other panelists included Anjali Bansal, Founder, Avaana Capital & Steering Committee Member, ONDC and Kumar P Saha, Founder, ndhgo.

The interoperable network has started its beta testing process with categories like groceries, food and beverages for small retailers in Bengaluru. ONDC plans to add home and kitchen, agriculture, fashion, apparel, footwear and accessories across India by the next few months. The ONDC pilot is currently up in about 80-85 cities.

“As a buyer or as a seller, it's your choice as an individual or a small business or a large business, who you choose to transact with. Think UPI, but UPI with physical goods and services. So of course, there is a much higher degree of complexity,” said Anjali.

Kumar believes ONDC will not just be restricted to the MSMEs. “I think it will be equally big for the enterprises and large businesses. And this is just the beginning, he said.

“Hyperlocal and kirana is where we have started with because I think that has a very immediate consumer effect and visibility. But the full power of the network of ONDC absolutely applies to large enterprises to mid-sized enterprises and consumers and kiranas,” said Anjali.

Ensuring consumer trust in the network

Any network participant who wants to be a part of ONDC, Thampy outlined, would have to first undergo a certain set of due diligence – who they are, what kind of business they are in, what's their credibility and so on, so forth. Secondly, they have to ensure that their IT systems are certified by the team who's developing the entire protocol. Third is that they define a network participant agreement, which is common for everybody. It's not a negotiated agreement, whether you're a large entity like a bank or a financial institution, or a small startup – all views on the same network agreement which binds you to a certain behaviour in the network.

And this network agreement will also include as its part the network policies as existing today, and as they evolve from time to time. These policies are essentially how they have to behave among themselves and with the outside world. And this is also digitally trackable, so it's all part of the protocol itself. Failure to adhere to the policies will lead to penalties and suspensions.

“While you are in a network, whether you're a seller platform or a buyer platform, your performance in the network is continuously tracked and rated, and it's available to the whole world. Once you are there as a business and have established your credibility with your GSTN number, pan number and so on, you are a tracked person to the community as a whole,” added Thampy.

India is trying to use technology and markets with enabling policies, which is a truly democratic method. “India showing how to use the market to the big capitalists in the world is a fantastic global example,” he concluded.