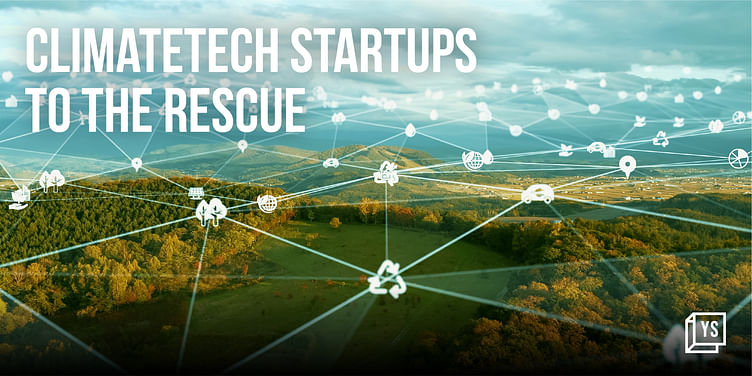 Increasing awareness of climate change and technological transformations have unlocked new pathways for startups in the sector.

At the COP 26 climate change conference last year, Prime Minister Narendra Modi pledged that India will attain the net-zero emissions target by 2070. While the country has committed to lowering its climate burden, the climate tech industry is still at a nascent stage.

"Despite the digital revolution in the tech business space, the market is still very inefficient and unstructured in terms of sustainability, Nidhi Mehra, Co-founder of Myplan8, tells YourStory. Myplan8 helps track, reduce and offset carbon footprint.

“However, businesses are looking for new and innovative ways to grow and scale up their companies keeping sustainability in mind,” she adds.

Many of these businesses are solving complex climate problems through agritech innovations, electric vehicles (EVs), or software development.

"Climatetech innovations are attracting second-time entrepreneurs, product managers, and engineering talent driven by consumer awareness and demand and the ever-increasing scope for innovation," he adds.

Home to 2,260 climate tech companies, India currently has the world's third-largest ecosystem of companies tackling climate change after the United States (7,561) and the United Kingdom (2,503).

Many including CogniTensor use artificial intelligence (AI) and machine learning (ML) to tackle the climate crisis with asset-light, scalable, and venture-investible solutions. It offers an integrated MLOps environment for faster development and deployment of AI and ML applications in the energy, sustainability, retail, and manufacturing industries.

Often, these solutions have the backing of large corporations, which helps advance the shift.

"The climate tech industry in India is primed for growth. Increasing awareness around the application of renewable energy, government focus, and technological innovations in both hardware and software have been the driving forces," says Devendra Gupta, Co-founder and CEO of Ecozen Solutions. The company develops climate-smart deeptech solutions such as solar cold storage.

Sumeet of Climate Angels says that while venture capital activity has slowed down for most sectors, climate tech startups are “signing deals at a record pace.”

“Climatetech unicorns, in fact, achieve unicorn status faster than any other sector in the VC world, with an average time horizon of less than four years, compared to the overall industry average of seven years," he asserts.

According to Holon IQ, 47 global climate tech companies such as OLA Electric, Rivian, Uplight, Sunfire, OVO Energy, Nxin, and others have achieved unicorn status since 2015.

The last year was a record one for climate tech investment as startups raised over $111 billion globally, according to a growth platform for tech companies, TechNation. Out of this, $4 billion was raised by UK companies and $39 billion by US-based companies. Around 172 Indian climate tech startups raised funds in 2021.

According to a report by London Partners and Dealroom.com, India ranks ninth globally in climate tech investment. Over the past five years, over 700 climate tech startups have raised over $4.5 billion in funding rounds from 272 unique investors in the country.

According to the International Energy Agency, new investments in established and emerging low-carbon technologies will cost the world $21 trillion over the next ten years.

Since 2010, the number of emerging technology companies addressing the climate crisis has increased fourfold globally to 44,595 firms in 2022.

This year, the government launched Mission LiFE, establishing a regulatory carbon trading market in India. It has also taken direct action such as converting public buses to EVs, making streetlights solar-powered, and offering special discounts on the purchase of private EVs.

While the government has mandated companies to follow the environmental, social, and governance (ESG) standard, expectations are much higher, and the actions taken are insufficient to close the gap on any of our goals, says Nidhi of Myplan8.

"A carbon tax and the establishment of an independent, authorised body on the lines of the Securities and Exchange Board of India (SEBI) are the immediate requirements for launching and managing the climate tech industry," she adds.

Along with initiatives, there remains a need for faster adoption of climate technologies and vigorous implementation of regulatory frameworks.

"Climate tech poses a multi-trillion-dollar opportunity for investors. The sector has a lot of things working in its favour. Regulatory tailwinds and climate commitments by large corporations are just the tips of the iceberg," says Sumeet.

“This has given rise to multiple business opportunities where startups can create large companies," he says.

Technology such as remote sensing, blockchain, data analytics, and AI are emerging as enablers for startups working on climate tech. Onlygood, based in Gurugram, provides carbon accounting software for businesses to track their carbon emissions against established enterprise goals by leveraging blockchain technology.

Ankit Kedia, Founder and Lead Investor, Capital A, says, “Many startups are coming up in the domain of carbon markets. We have sown a seed at a time when the conditions are favourable and can now look forward to a good harvest.”

According to Deloitte, unmitigated climate change is likely to cause the Indian economy to lose nearly $35 trillion in this decade while developing and exporting climate solutions could lead to an $11 trillion gain.

Ankit Jain, Co-founder and CEO, StepChange, which offers sustainable solutions to companies and brands, says there are strong tailwinds in the sector as both governments and companies commit to net zero goals and need solutions to decarbonise every part of the global economy.

However, the industry is still lagging in terms of proven data, particularly in the B2C and D2C segments, he says.