“I’m sold to the problem statement of Zerodha": Nithin Kamath 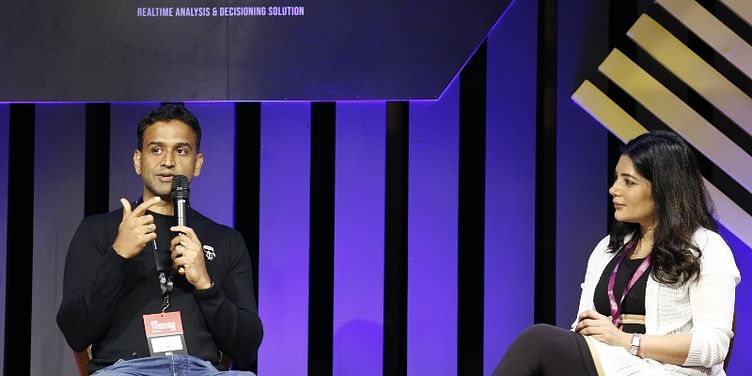 Nithin Kamath, Founder and CEO of Zerodha, believes in playing the long game. We break down his conversation with YourStory’s Shradha Sharma to reveal how he’s doing it.

The increasing number of unicorns in the past few years has inspired entrepreneurs across India. But, at the same time, it seems to have led to popular misconceptions, especially around the role investment and valuation play in a startup’s journey.

In this context, Nithin Kamath’s unconventional wisdom that went into building ﻿Zerodha﻿ makes for a particularly interesting study.

YourStory Founder and CEO Shradha Sharma’s discussion with Nithin Kamath, Co-founder and CEO of Zerodha, at TechSparks 2022 shows just why this startup is geared up for the long race.

More (valuation) is not always merrier

Nithin spoke of a time when investors were willing to sign off blank cheques to Zerodha and he chose to not take that money. “Always prepare for the worst-case scenario,” said Nithin says, pointing to dangers of raising money in a bullish capital scenario based on inflated and notional valuations.

The founder believes investment is someone else’s money in the bank, and therefore an obligation. Founders shouldn’t oversell an idea, because while that may get a higher valuation, the business numbers won’t match up.

Further, the pressure to get the promised numbers for investors might lead to decisions detrimental to customers.

“What is right for the investors is hardly ever right for customers. I keep thinking if I have to make money for investors, how do I do that without compromising my customer’s interest?" Nithin said.

“If you are on the treadmill where you have oversold to the investor, then you compromise on your customer’s interest.”

Bigger (team) is not always better

Nithin started by believing that more people solve more problems. However, with time he realised that more people might actually complicate a problem. Zerodha has continued to serve a larger customer base without inflated team sizes.

Despite being a fintech company, Zerodha works with a technology team of just 36 members who aren’t even from the IIT kind of colleges. So how does Zerodha turn them into linchpins?

The company allows everyone autonomy in their area of expertise. Nithin admitted to being swayed by the “fintech founder” tag and advising his tech team without being an expert in the area. However, he quickly realised his mistake and now lets the team figure out how they will implement something.

Nithin also recognised the fact that employees take two to three years on the job to finally start blossoming. “Skills compound over time,” he said.

Zerodha creates an environment where employees choose to stay on for long. Many of the technology team members have been with the fintech for their entire career spans.

Thirdly, Nithin doesn’t believe in overselling the company’s vision and growth to prospective employees or hiring them by throwing more money. “Those who join you for money will leave you for more money,” he said.

Money matters, but not in the way we understand

Nithin’s own perception of money has evolved over time. In his early days, Nithin had pictures of things he wanted to own pasted across his room. However, he found himself making the most mistakes when he chased a rupee goal. He did achieve everything he wanted to, but also lost interest very soon.

Nithin said life is simpler with limited money, because more money results in endless choices of what you can buy and do. Identifying a point when one says “I have enough” can make life beautiful.

He also spoke at length about the manner of earning money. “Don’t chase money, let it float towards you,” he advised, adding that if someone who gets fast money is not likely to appreciate it as much as someone who earned it the hard way.

Having money can also trigger fear and greed, which come in the way of learning. This makes it important to get youngsters to think about money and risk-taking when they are in school and college.

“If you ask me, what am I most proud of, it’s that we’ve been able to build a brand that people trust,” Nithin said. He said this trust is the real differentiator of Zerodha, and something that will be most difficult for any competitor to catch up with.

It’s the outcome of not just the big decisions, but how the fintech does the small things.

Nithin revealed that Zerodha sent a total of just 12 push notifications to customers in the entire year. The founder, who finds push notifications annoying, did not want to subject customers to them. The company also does send out blanket stock tips because each customer is unique, with different risk appetites.

At core of this trust is also the fact that Nithin and his team define their purpose around the problem they’re solving for the customer, not any valuation number.

In response to a question by the YourStory founder on how he stayed stay true to himself, Nithin said, “I’m sold to the problem statement of Zerodha. The core team is sold to the idea. Even before all the success happened, we never really spoke about money.”

The conversation left people thinking about the fundamentals of building a great company. Becoming a unicorn is not the destination for a startup, but the beginning of an arduous journey to sustain that growth.

The wisdom at the heart of Zerodha will help the fintech keeps its eye on the stars and feet on the ground as one of the top unicorns. And it’s a mantle that Nithin and his team will carry, in Shradha Sharma’s words, “very well and very responsibly”.

Swati Jena is a columnist with YourStory. She is the Founder of WriteFor. An author, TEDx speaker and LinkedIn Top Voice, Swati comes with 18 years of organisational and entrepreneurial experience across 10+ industries in roles spanning education, L&D, product management, talent management, and human capital consulting.