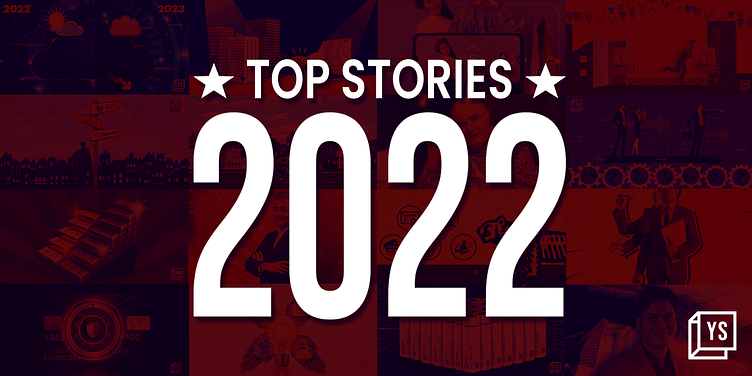 In 2022, the Indian startup ecosystem saw all four seasons, beginning with a spring of funding, followed by heated dramas and fallouts, a fall of tech valuations in public markets and a winter that is still going on.

A lot happened in 2022. Do you remember the Zilingo-Sequoia fallout? Seems like a long time ago, but it was just this April, just eight months ago.

From the rise and fall of Web3, the surprising turn of events in edtech, the cloudy weather in SaaS and fintech, as well as the sunshine in D2C—2022 was one action-packed year. NFTs gained notoriety and then fell…hard.

Edtech companies—after a glorious 2020 and 2021—saw the tides turn. Many shut down, laid off employees, and some even pivoted offline. Then, a very well-known fintech company went through the wringer with some old-school feud between founders, airing of dirty laundry on Twitter, followed by a book and ending the year with a lawsuit.

And that’s just the tip of the iceberg. Here are some of our must-read stories showcasing all that happened in the startup ecosystem in 2022.

The bull run for startups seemed to come to an end. In 2022, a year marked by subdued investments and going back to basics to build a company, multiple startups had to let go of employees to conserve cash. Starting with the IT and ITeS giants, moonlighting or working multiple jobs often without due disclosure came to the fore. So much so that the government had to clarify that moonlighting should not adversely impact the interests of the employer.

However, most startup employees seem to be looking for work-life balance after two exhausting years of uncertainty. Often used as a synonym for commitment and professionalism by startups, hustle culture came in for sharp criticism from the employees. Read more.

While most startups are struggling to cut down costs, founders building bootstrapped companies have had to double down as the funding winter looks bleak. The dark side of the startup dream which takes blood, sweat and tears is often brushed under the carpet lest it takes away from the shine.

Bootstrapping is not a new phenomenon in the startup ecosystem. In fact, unofficial reports say nearly 92% of Indian companies are bootstrapped or have not raised any equity/debt funding.

We spoke to 15-odd entrepreneurs from across sectors to catch a glimpse into what it’s like to bootstrap. Read more.

The light has to follow the dark and some sectors hit the ground running. The electric vehicles or EV sector has shown great momentum as the number of OEMs and spare parts manufacturers grew.

The sector also saw some mishaps as EV two-wheelers reported accidents due to battery malfunction. While regulators have been instrumental in getting the sector off the ground, tough love might stifle innovation. Chetan Maini, Co-founder and Chairman of Sun Mobility, an authority in the EV space in India, spoke to YourStory about what's next. Read more.

Storied edtech startups, which didn’t fare so well with funding that wasn’t and frequent lay-offs, managed to find a way out of the darkness. The bet on omnichannel play and acquisition of brick-and-mortar centres to go beyond the metros has paid off for some companies.

In August last year, the central government introduced Drone Rules, 2021, to regulate the drone sector. These rules and subsequent policies have provided a tremendous thrust to the sunrise industry and pushed the need for talent.

The industry is witnessing a spurt in demand for talent across roles and functions. With demand outweighing supply, what are drone startups doing to attract and retain employees? YourStory spoke to startups and employees to understand the ground reality. Read more.

As the pandemic accelerated the digital transformation of our society, consuming content through social media became a favourite pastime for people. It also gave a boost to the creator economy.

Both old and new crops of creators started posting short videos to gain followers during the pandemic. But in the post-pandemic world, creators seem to have reduced their number of posts or quit creating videos altogether. Read more.

BNPL was in the news all year long! A notification by the Reserve Bank of India in June on prepaid payment instruments led many BNPL operators to rethink their business models.

Often touted as the first step to getting Indian users started on credit products, Buy Now Pay Later products were offering mall, manageable, sachet-sized credit that could help users build their credit profiles, provide a safety net in times of emergencies, and, more importantly, help people understand the way credit works—all via a card. So what happened? Read more.

Every non-financial company is a mere step away from offering financial products to its existing or potential customers, thanks to the consortium of embedded finance infrastructure providers or enablers, popularly known as pipes.

They work as an interface between financial institutions (banks/NBFCs) and digital platforms/businesses to help the latter offer financial products/services alongside their core offerings. And as money pours into the embedded finance sector, touted as the next big wave in fintech, YourStory spoke to top VCs in the space for their views on embedded finance infrastructure startups.

When Vinita Agarwal was undergoing hair fall problem during the second wave of COVID-19, her parents RK and Shakuntala Devi Choudhary—also known as Nanaji and Naniji—decided to make a natural hair oil at home to solve it. In a year, Avimee Herbal has made approximately Rs 13 crore in sales until July, growing from Rs 80 lakh worth of sales until November.

The brand, which started with just one hair oil, now has 17 SKUs in its kitty, including skincare, beard care, and other hair care products. In 2022, the couple has become an internet sensation, especially when the business enabled Nanaji to recently buy his first car at the age of 85. Read more.

In the last decade or so, the market has been flooded with different kinds of SaaS solutions. They are affordable, easy to use, and can easily integrate with complementing apps, making them attractive to organisations, especially those in the growth and late stages.

The software-as-a-service sector that benefited from the rush to digitalise during the pandemic is in a trough as companies look to conserve cash to tide over a looming recession. These companies are now increasingly gravitating towards SaaS management startups to shed their software excesses. Read more.

At YourStory, we had an exciting year. We went overseas, launching YS Gulf, and closer home, unveiled YS Life, our premium lifestyle and cultural online magazine.

This year, we also went back to hosting TechSparks offline. After two years of reaching millions of people digitally, the 13th edition of India’s largest startup-tech conference was held in the country’s Silicon Valley—Bengaluru—and featured some prominent speakers.

The Chief Guest was Finance Minister Nirmala Sitharaman, who despite her aversion to flights, travelled all the way from Delhi to deliver a scintillating keynote address, as well as join YourStory Founder-CEO Shradha Sharma in a fireside chat decoding the future of tech and finance of the country. “We are in a tech-ade,” she said.

We were joined by iPod inventor and iPhone co-inventor Tony Fadell, who says you don’t really need the latest and greatest smartphone in the market, and dropped some truth bombs on innovation. Nithin Kamath, Co-founder and CEO of Zerodha, delivered some much-needed nuggets of wisdom for entrepreneurs.

Then, PW Founder and CEO Alakh Pandey, the teacher making the right noise in edtech, spoke about how edtech “doesn’t need to only be online”. Earlier, in July, Alakh also joined us in an exclusive, candid interview on the roller-coaster ride that has been PW so far.

Last but not least, YourStory spoke to experts and entrepreneurs across sectors throughout the country to understand the trends to look forward to in 2023. Check them out here.