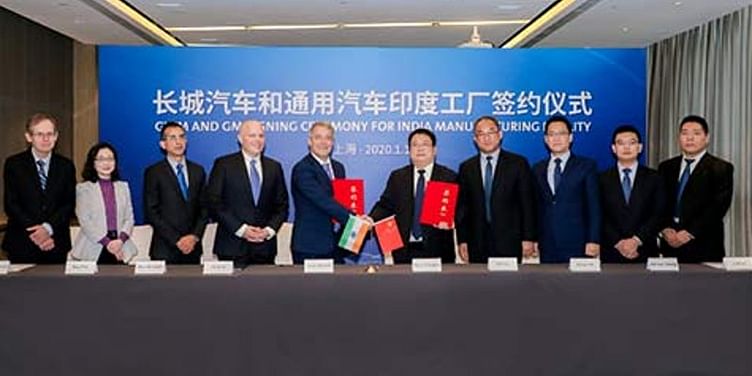 The transition at the Talegaon plant from General Motors to Great Wall is expected to be completed by the second half of 2020.

Chinese automobile manufacturer Great Wall Motors on Friday has announced that it will be buying General Motors’ Talegaon-based manufacturing plant. The US-based carmaker used to manufacture the hatchback, Beat for the Latin American market from the facility in Maharashtra. General Motors had previously stopped selling its cars in India in May 2017.

The Talegaon facility under General Motors had an annual manufacturing capacity of 1.65 lakh vehicles and 1.6 lakh powertrains. With the two companies agreeing to the sale, the agreement is now on the table for the necessary government and regulatory approvals.

Earlier this month, Great Wall Motors officially confirmed its plans to enter the Indian market. The Chinese manufacturer is the largest SUV and pick-up truck manufacturer in its domestic market. It had established an R&D centre in Bengaluru in June 2016.

Sources close to the development suggest that Great Wall is expected to pay about $250 million to $300 million to acquire the plant.

“The Indian market has great potential, rapid economic growth, and a good investment environment. Entering the Indian market is an important step for Great Wall Motors’ global strategy. Great Wall Motors’ investment will create more jobs, including direct and indirect employment, further enhancing the skill level in the auto industry; promote the development of the local supply chain, R&D, and related industries; and contribute more profits and taxes to the Government of India and the Government of Maharashtra.”

Meanwhile, General Motors has confirmed that it will provide a separation package and transition support for impacted employees, as well as an orderly transition for its partners. Chevrolet will continue to honour all warranties and provide aftersales support, including ongoing service and parts requirements for existing customers in India.

Great Wall will be showcasing the Haval brand SUVs and GWM EV (Ora R1) at the upcoming Delhi Auto Expo 2020 in February.