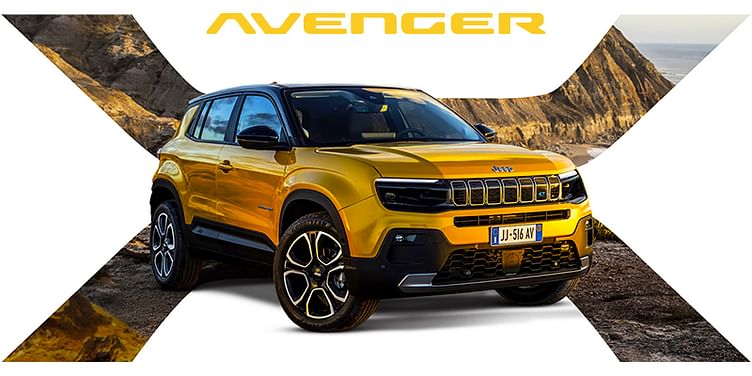 Jeep will launch four fully electric SUVs by 2025, with Avenger being the first to hit the European streets.

Jeep has officially unveiled its first electric vehicle (EV) named Avenger at the ongoing 2022 Paris Motor Show. Avenger is the smallest SUV to be rolled out carrying the American brand name.

The upcoming SUV was unveiled a couple of months back at the 4xe Day 2022, but Jeep revealed the model now with all its technical specifications. It is expected to go on sale in European markets in the first half of 2023, followed by other major international markets.

Jeep's Avenger is also the first SUV to be underpinned by Stellantis’ STLA Small platform. In terms of dimensions, the model measures 4,080 mm in length, making it 150 mm shorter than the brand’s current smallest offering–Renegade.

Ground clearance is generous at 200 mm, while shorter front and rear overhangs result in approach and break-over angles of 20 degrees and a departure angle of 32 degrees.

Avenger retains signature Jeep styling elements, including the seven-slat front grille, although the panel is sealed-off since it’s an EV. The gloss black panel is flanked by rectangular headlights with integrated LED DRLs. The rear features smoked rectangular taillamp clusters with X-shaped LED elements and a large silver-coloured bash plate lending the SUV some heft.

Despite its compact proportions, Avenger’s upright stance is highlighted nicely, thanks to the squared wheel arches with thick black claddings filled up by 18-inch dual-tone alloy wheels, offering an imposing road presence. Subtle blue accents on the bonnet and alloy wheels signify the vehicle runs on a battery.

Other highlights include sharp creases along the side profile, a shark-fin antenna, a faux silver-coloured scuff plate at the front bumper, the rear door handles mounted on the C pillar, and blacked-out pillars and roof.

The cabin of Avenger screams minimalism despite its modern layout. The colour-coded dashboard brings a contrast with the otherwise all-black interior theme.

Speaking of the dashboard, it houses a 10.25-inch touchscreen infotainment display in the centre and rectangular air condition vents seamlessly integrated across the entire width.

The centre console also looks minimalistic, comprising hidden storage places and a large ‘e’ logo at the centre. The cabin appears to be very practical with a total of 34 litres storage capacity, including cubby holes and storage shelves under the centre armrest and AC vents.

Jeep will load the SUV with features, including a 10.25-inch digital driver’s display, ambient lighting, powered front seats, auto climate control, and more. The production-spec model will also offer creature comforts like an electric sunroof and massage function for front seats, missing in the prototype showcased.

Powering Avenger is a 54kWh battery pack that supplies energy to either two or four motors, depending on the variant’s configuration. The powertrain generates a peak output of 154 bhp and 260 Nm of torque. Jeep has confirmed that the compact SUV will be offered in two-wheel drive and all-wheel drive drivetrains.

Besides, Avenger will also benefit from Jeep's Selec-Terrain driving modes—Normal, Eco, Sport, Snow, Mud, and Sand—which vary according to terrain and driving parameters. Battery capacity is good enough to drive the SUV for a WLTP-certified range of 400 km on a single charge and can be extended up to 550 km, depending on driving conditions.

Jeep Avenger will be manufactured at the company’s facility in Tychy, Poland, and will start arriving in showrooms early next year in Europe, with bookings already underway. Moreover. the electric SUV could land in India in future as EVs gain steam in the market.