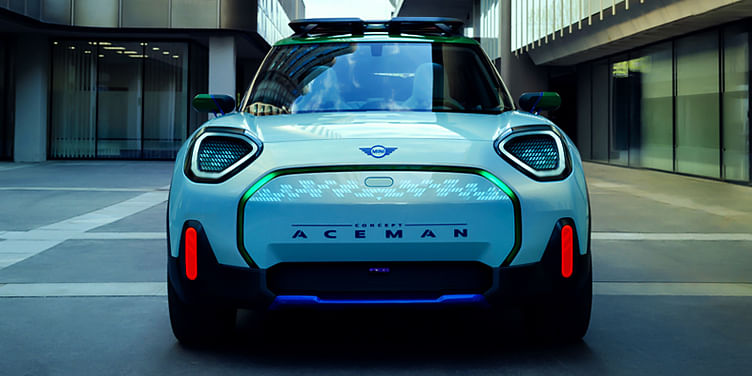 The MINI Aceman concept will make its first public appearance at the Gamescom 2022 gaming event in Cologne, Germany on August 23.

MINI is gearing up to make a splash in the electric vehicle (EV) space as it officially revealed its latest EV concept—MINI Aceman. The concept previews the design of its future generation of fully-electric models in the premium small car segment.

The BMW-owned British marque plans to gradually phase out its internal combustion engine (ICE) vehicles while aiming for half of its sales to be electric by 2027. The company will be launching its last ICE vehicle in 2025. Earlier last year, MINI had announced that it would completely stop selling ICE-powered cars by 2030.

The carmaker’s latest concept is expected to evolve into the brand’s upcoming electric crossover and is likely to reach production by the end of 2024. When launched, the production-spec model of Aceman will most likely be slotted in between the MINI hatchback and the Countryman SUV. In all probability, MINI Aceman could be a direct replacement for MINI Clubman which is likely to be discontinued by the middle of 2023.

Aceman is based on a stretched version of the all-new Spotlight architecture that has been jointly developed by MINI’s parent company, BMW and Chinese automaker Great Wall Motors. The platform will also underpin the next-generation model of the electric MINI hatchback. The two carmakers joined hands to form a 50:50 joint venture in 2019 to build MINI EVs in China.

MINI has retained signature styling elements inside the cabin as well while adding a immersive experience to the overall cabin layout. The dashboard features a large circular OLED touchscreen that doubles up as an infotainment unit as well as an instrument console. Knitted upholstery is wrapped around the dashboard and three-spoke steering wheel, but most of it is expected to stay away from the production model.

Speaking of the dashboard, it gets a flat design element styled like a sound bar that extends across the entire width of the cabin. It is connected via a support structure which, like the roof rack, displays the Union Jack pattern that emphasises the harmony between exterior and interior design. Sticking to MINI traditions,  a toggle switch bar has been placed below the large OLED screen.

The gear selector knob and parking brake switch have been relocated which has freed up space in the centre console. It offers the option to freely position a wireless smartphone charging pad, storage compartments, cupholders, etc. Another unique feature is the moving image projection on the dashboard that creates a whole new in-cabin experience.

The projection opens up an infinite variety of representations that are accompanied by colour scheme, lighting mood and sound sequences. MINI is also offering three different Experience modes namely- Personal, Vivid and Pop-Up, which determine displays and colour combinations depicted on the central interface panel. Other convenient features offered include auto climate control, ambient lighting, and a projector facility.

Although MINI claims that Aceman is a pure concept, the company is likely to retain around 80% percent of the design in the final production model. The pre-production concept is based on the carmaker’s new "Charismatic Simplicity" design philosophy for its future EV line-up. It has also retained some signature MINI styling elements like short front and rear overhangs.

Up front, the car flaunts clean panels with a faux radiator grille outlined by an octagonal illuminated element. The central panel embodies bold lettering of ‘Aceman’ taking centre stage while headlamps are encased within oddly-shaped clusters instead of regular circular units. The most prominent highlights on its side profile are the 20-inch alloy wheels filling up the squared wheel arches wrapped in thick black claddings.

Enhancing the car’s aerodynamics is a distinct shoulder line and a tailgate spoiler. The roof of the car houses a luggage rack that flaunts a Union Jack pattern. Similar Union Jack treatment is seen in the rear taillights as well. In terms of dimensions, MINI Aceman concept measures 4.05 metres in length, 1.99 metres in width and 1.59 metres in height—making it a wee bit larger than the current Countryman.

MINI is yet to reveal details regarding its powertrain specs but the British brand is likely to offer both single- and dual-motor setups on the upcoming Aceman. The crossover can also borrow its powertrain from the Cooper S which features a 50kWh battery pack delivering energy to a 224 hp motor and returns a range of around 402 km on a single charge.