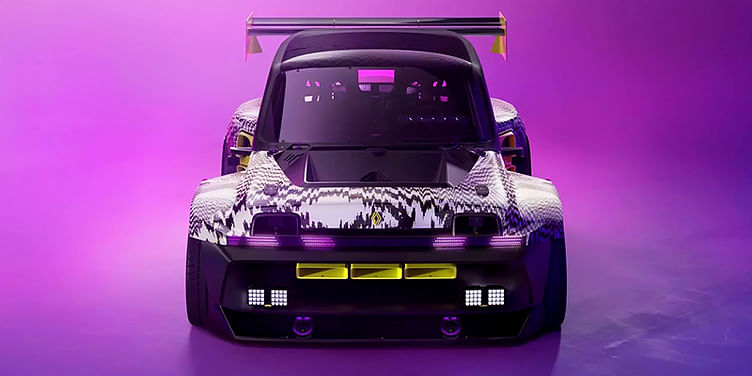 A near-functional prototype of Renault R5 Turbo 3E will be showcased at the upcoming 2022 Paris Motor Show.

While the market for electric vehicles (EVs) has witnessed a gradual surge globally, ambiguity among consumers still remains. Despite impressive outright acceleration, thanks to the peak torque achieved instantly, EVs don’t feel very connected to the roads compared to their ICE counterparts.

Power in EVs tapers off after the initial surge which tends to limit the excitement behind the steering wheel. However, all EVs aren’t dull machines. At least, Renault wants to prove so. The company has unveiled a pre-production concept for the upcoming Renault R5 Turbo 3E.

The prototype is expected to make its global debut at the 2022 Paris Motor Show next month. Ahead of its maiden public appearance, Renault has taken the wraps off the concept hot hatch which borrows inspiration from the brand’s most celebrated sports cars—Renault 5 Turbo 3 and Turbo 2. It also marks the 50th anniversary of the Renault 5 hot hatchback.

The concept is essentially a high-performance derivative of the all-electric Renault 5 prototype unveiled early last year. The “3E” in its name signifies it's the third in the lineage and propelled by a fully electric powertrain. Although loaded with technology, the hot hatch retains an old-school charm, thanks to its design.

Built on a tubular chassis, the Renault R5 Turbo 3E concept sports a design of a small race car, with a long muscular bonnet up front and a large wing spoiler at the rear. It flaunts a sleek grille panel at the front face, featuring multiple air scoops flanked by cube-like LED headlamps mounted on the bumper, along with large air dams on the lower section.

On the sides, it features a pair of air scoops to reduce drag that blend in with the flared rear wheel arches. The car rolls on 19-inch front and 20-inch rear designer alloy wheels. Highlights at the rear include a raked windscreen to accommodate the wing and a prominent diffuser.

The quirky design philosophy of its exterior is carried over to the interiors of the cabin. The dashboard is wrapped in a plaid-pattern element and features a single screen, placed behind the leather-wrapped steering wheel. It also gets a rather odd-looking long, upright handbrake lever with a dedicated drift mode so that one could engage in track-based smoke-play.

Safety is guaranteed with an FIA-approved roll cage and harnesses attached to the racing-type bucket seats. The contrasting yellow accents provide a nice sporty touch to the all-black cabin.

Like its ICE-powered predecessors, Renault R5 Turbo 3E gets a rear-wheel drive setup. However, this one features two electric motors that produce a combined output of 375 bhp and 700 Nm of peak torque. These figures are enough to propel the car to 100 kmph from a standstill in just 3.5 seconds. The hatch clocks a top speed of 200 kmph.

The electric motors derive energy from a 42kWh Lithium-ion battery pack placed underneath the floor at the centre which can be fully charged in two hours via a 380V/32A charger. The concept weighs a total of 980 kg out of which the batteries consume 520 kg.