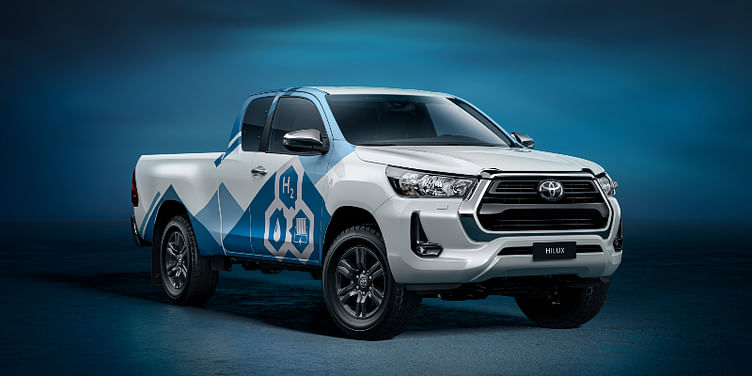 Following successful performance results from the initial prototypes, hydrogen-powered Hilux can enter a limited series production for the general public.

With the global automotive industry transitioning from conventional fossil fuels to cleaner sources of energy, it has become imperative for manufacturers to invest in modern technologies that have a sustainable future.

Along with battery-powered electric vehicles (EVs), vehicles running on hydrogen fuel cells are deemed to be a major solution for future mobility. Auto major Toyota is one such brand that has invested in hydrogen fuel cells. The company’s breakthrough project in this field came last year in the form of the Mirai sedan.

Powered by Toyota’s fuel cell technology, the Mirai’s powertrain will now be utilised to build a prototype of Hilux. The Fortuner-based UTE is known for its tough and utilitarian build quality. Last year, the Japanese carmaker successfully applied for Advanced Propulsion Centre (APC) funding, from the United Kingdom Government.

The upcoming project will contribute to the development of new, cleaner technologies and mobility solutions. The funding from the UK Government will specifically support later stage research and development that takes a product from proof of concept to prototype vehicles.

The consortium will be led by Toyota Motor Manufacturing (UK) (TMUK), which has forged partnerships with various other UK-based technical engineering firms, namely Ricardo, ETL, D2H and Thatcham Research. The objective of this project is to adopt second generation Toyota fuel cell components and transform Hilux into a fuel cell-powered electric vehicle.

With TMUK leading the project R&D, a team from Toyota Motor Europe (TME) will provide expert technical support to enable UK-based teams to build their own expertise and self-sufficiency to develop next-generation hydrogen drivetrain capabilities. The Hilux prototype will be built at Toyota’s facility in Burnaston, Derbyshire. The production will continue for two years, starting in 2023.

Although the project will initially be restricted to the development of prototype vehicles, Toyota hasn’t ruled out the possibility of the hydrogen-powered Hilux entering limited series production catering to the general public, if the initial prototypes turn out to be successful.

While Toyota hasn’t revealed exact specifications of the upcoming hydrogen-powered Hilux, it is expected to share the same powertrain as the Mirai sedan. The Mirai gets three hydrogen tanks that can hold up to 141 litres/5.6 kg of hydrogen, pressurised at 700 bar (10,150 psi) and feeding the fuel cell stack, which supplies energy to the 1.2kWh lithium-ion battery.

This lithium-ion battery delivers energy to a single motor mounted on the rear axle, although the power output in the Hilux prototype might differ from Mirai. In the sedan, this powertrain is good enough for a claimed 646 km of driving range as per the US EPA test cycle and returns a peak output of 134kW (180 hp) and 300 Nm of torque.

In India, Hilux is powered by a 2.8-litre turbo-diesel engine that churns out 201 bhp and 420 Nm (500 Nm in automatic) of torque. Transmission duties are carried out either by a six-speed manual or a six-speed torque converter automatic transmission. It gets a 4x4 drivetrain with a low-range transfer case as standard.