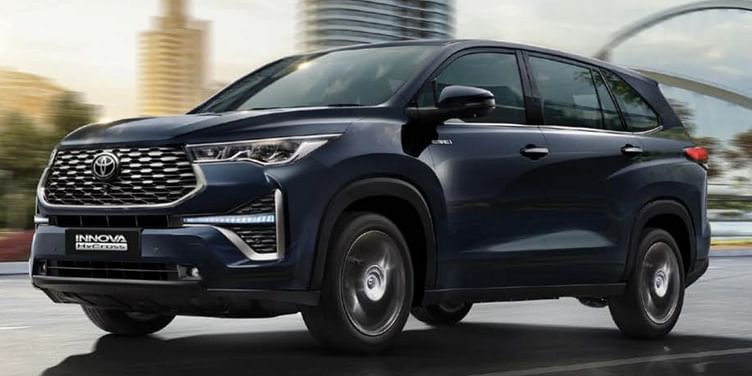 Toyota Innova Hycross will be offered in five variants, including GX and G with the pure petrol engine, and VX, ZX, and ZX (O) with the strong hybrid powertrain.

Toyota Innova has received a generation upgrade, which adds a new suffix to its name. The Innova nameplate will now be followed by the ‘Hycross’ badging instead of Crysta, and receives a complete overhaul over the latter. After making its global debut in Indonesia a few days ago, the new Innova Hycross has been unveiled in India.

Prices of the new-gen MPV will be announced in January 2023 and deliveries will follow shortly thereafter. Pre-launch bookings for Innova Hycross have commenced at a token amount of Rs 50,000. Meanwhile, the older Innova Crysta will continue to be on sale in the market for the time being.

The most significant deviation from previous iterations of Innova is that the new model is underpinned by a monocoque chassis unlike the ladder frame construction used previously.

The new Innova Hycross is based on Toyota’s TNGA-C platform, a front-wheel driven architecture as opposed to the rear-wheel drive layout offered in earlier versions of the MPV.

The new chassis makes Innova Hycross 200 kg lighter than its predecessor. It is longer (4,755 mm) and wider (1,850 mm) than the existing Crysta, although its height is the same at 1,795 mm. The wheelbase is now longer by 100 mm in comparison to the 2,750 mm of the Crysta which should result in a roomier cabin. Ground clearance remains constant at 185 mm.

The automaker has given a completely different attire to its latest offering as compared to its predecessor. Hycross flaunts a more upright stance which gives it SUV-like proportions, thanks to a raised bonnet line and body cladding all around. Up front, it gets a new fascia comprising a redesigned hexagonal grille with honeycomb mesh inserts and a chrome underlining, and is flanked by sweptback LED headlamps on both sides.

The front bumper has been reprofiled and gets triangular inserts and new LED turn indicators. It also houses a sleeker air dam underlined by a silver-coloured faux skid plate. The distinctive MPV silhouette remains, which is accompanied by a prominent shoulder line and flared wheel arches.

Visual highlights on the side profile include blacked-out B and C pillars, a large glasshouse, 10-spoke chrome-finished alloy wheels and a revised glass panel for the third row. On the rear, Innova Hycross gets a larger windscreen, wraparound LED headlights, a roof-mounted spoiler, and a blacked-out rear bumper.

The cabin interiors of Hycross are a complete departure from the Crysta—it is premium and laced with all modern amenities. In its latest iteration, Innova continues to be offered in seven and eight-seat layouts, the former available with two captain seats in the middle row. The cabin wears a dual-tone, brown and black interior theme with the leather seats wrapped in Dark Chestnut upholstery.

The multi-layered dashboard with horizontal lines looks classy, thanks to soft-touch leather and metallic decorations. Another big update is a dash-mounted gear-shift lever, resulting in more storage places in the centre console. Another distinct highlight is a new 10.1-inch floating touchscreen infotainment display accompanied by rectangular AC vents and a stack of HVAC control.

In terms of safety, Hycross is loaded with features such as six airbags, ABS with EBD, traction control, electronic stability programme, and three-point seatbelts for all passengers. The MPV has been equipped with Toyota’s Safety Sense, the brand’s lingo for ADAS (Advanced Driver Assistance System). The ADAS suite consists of features like Adaptive Cruise Control and Lane Keeping Assist.

Toyota is offering Innova Hycross with two powertrain options—a normal petrol unit and a strong hybrid unit. The former is powered by a 2.0-litre, four-cylinder motor that churns out 172 bhp and 205 Nm of peak torque. This unit is mated to a CVT automatic gearbox.

In the strong hybrid variant, Hycross employs the same 2.0-litre petrol unit that is coupled with Toyota’s fifth-gen strong hybrid tech (M20A-FXS). In this form, the motor delivers 152 bhp and 187 Nm of torque and is mated to an electric motor developing an additional 111 bhp and 206 Nm of torque. The combined power output stands at 184 bhp.

The strong hybrid powertrain comes paired with an e-CVT transmission and returns a claimed ARAI-rated fuel efficiency figure of 21.1 kmpl. The MPV can sprint from 0 to 100 kmph in 9.5 seconds.