Be a girlboss! YouTuber Saloni Srivastava tells millennials how with tips on personal finance, diets, self-care, and more 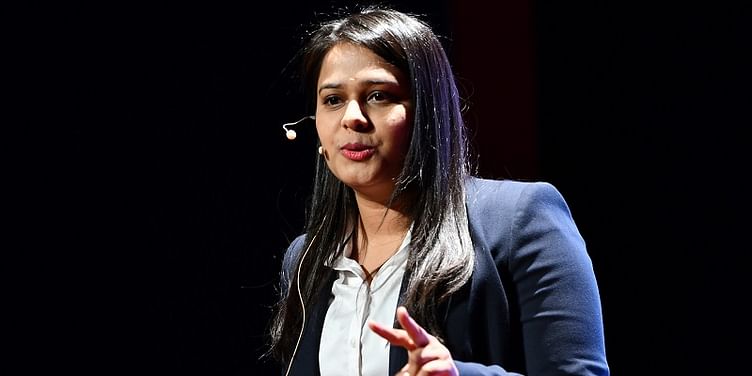 Do you want to buy a home before turning 30, or learn to invest in the stock market? YouTuber Saloni Srivastava shows her 200,000 (and growing) subscriber base exactly how.

On a slow Saturday morning in late 2017, Saloni Srivastava pressed her iPhone into her husband’s hands and convinced him to record her meals through the course of the day. She then used simple, free software to do a basic edit, and uploaded the video on YouTube. A week later, it had gained 1,000 views, and Saloni was hooked.

Today, the 26-year-old’s YouTube channel has nearly 200,000 subscribers, with new ones adding on at an astonishing speed. In a conversation with HerStory, Saloni breaks down what worked for her, how she created a niche in the crowded YouTube space, and found her purpose along the way.

Dreams beyond a small town

Hailing from Ankleshwar, Gujarat, Saloni was born to parents who placed a lot of emphasis on education. Her mother is the principal of a school, while her father, who passed away recently, was an engineer who taught kids in their society over weekends. This was why Saloni was sent to Delhi after Class X, and thereafter to Pune, and then Delhi again for higher education.

“I started off as a marketing manager at an edtech company after my bachelor's, working in Noida and Gurugram for a few years. It was a good mix of my interests: being creative and analytical. But the 9-to-7 job got to me after a point, and I wanted to do something more,” she says.

This was when she started watching YouTube videos, and was amazed at the quality and style of videos “normal people” like herself were creating. “I was fascinated by these YouTubers and the lives they lead, where they get to work on new ideas every day, and talk about what they feel like on camera,” Saloni adds.

Standing out in a saturated space

Saloni was itching to explore this world as well. She started small, using just her phone to record videos, and after the success of her first video, worked her way up to 1,000 subscribers within a month. Along the way she had to hone her offering, and figure out what exactly was the path her YouTube channel wanted to take.

“I had very diverse interests, and on YouTube people were already talking about everything. I wanted to find my own voice and ideas that I would become known for,” Saloni says. This was when she realised that YouTube was saturated in the beauty, makeup, and luxury lifestyle space. She wanted to make relatable content and explainer videos for people like herself: young and finding their feet in the adult world. With the idea for her channel in mind, and knowledge from her interactions with YouTubers she collaborated with at her marketing job, she was able to figure out what to do with her channel.

Then came the time to bang out the production process. “I got married around that time, and my husband became my cameraman,” she laughs. Thus began her simple journey of creating videos for YouTube.

Saloni told herself she would quit her full-time job and do YouTube full-time the moment she hit 10,000 subscribers. “The thing was, I did not make much around the 10,000-subscriber mark, but I dug deep into my savings and decided to get serious about it,” she explains.

Hunkering down and focusing on creating content helped as within a couple of months of quitting her job, Saloni’s channel notched up 70,000 subscribers. There really was no looking back after this for the Bengaluru-based YouTuber.

Also read: Internet stars Prajakta Koli and Kabita Singh show how to make money and build a career on YouTube

From videos on getting your personal finances in order and meal prepping effectively, to managing your morning responsibilities and recommendations on life-changing self-development books, Saloni’s videos cover a range of topics that help the 18-30 age bracket deal with aspects of adulthood that are not taught in school.

In her video, ‘GirlBoss Habits That Will Change Your Life’, Saloni gets into the nitty-gritty of what it takes for a woman to grab life by the collar and realise her dreams. Using a simple sit-down format, interspersed with montages of herself at her desk, or trying on a plum-coloured blazer before setting out for a meeting, Saloni’s video will make any woman watching to get up and start chasing her goals immediately.

And her followers are doing just that.

“The other day I was having dinner with my husband at a restaurant when a group of college girls came over to our table and said that they have started a recurring deposit of Rs 500 every month, after watching my video on how to invest and save for the future. To me that is the most satisfying part of being a YouTuber, beyond the money and the recognition,” Saloni quips.

Also read: 4 mistakes that millennials need to avoid while working as freelancers

‘Are you a doctor or an engineer?’ ‘Neither, I am a YouTuber’

Calling oneself a ‘YouTuber’ may still feel unfamiliar for many content creators in the country. This is because in India, we are expected to pursue traditional jobs promising fixed, but assured incomes. “Walking up to your parents and saying you want to be a YouTuber is not frowned upon in the US, but things are changing with more opportunities,” Saloni says.

Indeed, with the rise of the gig economy, and brands seeing value in collaborating with content creators, there has never been a better time to pursue your passion online.

Saloni’s personal brand has grown so much that she now has a small team assisting her: someone to handle the camera (she invested in a good one when her channel grew), her business manager, a person to help her with idea brainstorming for content, and one to help her to stay on top of communication. While her income is not fixed, in any given good month, it runs into several lakhs, she says.

Brands are taking notice of her growth and reach. “I held off on working with brands initially because I wanted complete control of my content, and I wanted to offer credibility to the brands, and that can happen only after I build my audience,” she says.

Now, she partners with companies that align with her channel’s messaging: mutual fund and investment app Sqrrl, online video learning platform Skillshare, to name a few. And while her videos have gotten better, and more polished over time, they are still liberally peppered with insights into her daily life. When she lost her father recently, Saloni made a loving tribute to him as well on her channel.

Building a community of girlbosses

Today, Saloni has a registered company and has successfully positioned her personal brand beyond YouTube. A good example was her recent business effort: “I was looking for a good planner that was suited to my self-development, habits and productivity tracking needs. The planners currently available in the market were all very pretty but not very functional. This was when I worked with my team to create an exhaustive planner-cum-workbook late last year. We printed 2,000 copies to sell in three months; all the copies were sold out within three hours!” she says.

This was a learning curve for the young YouTuber who truly understood the power of good content and her personal brand. Armed with that understanding, she is now ready to bring out her line of journals and workbooks on a scale that her name now attracts.

Other plans are in the offing too. “I have at least 20-30 young women writing to me every day to help them figure out how to set up their business. And I really want to help them out,” Saloni says, adding that she will be consulting and creating a community of young women who can chase their dreams.

As a parting note, the Bengaluru-based YouTuber has this to say to all her viewers aspiring to become content creators themselves: “Find your voice. Don’t create content in space that is already saturated. And start. Immediately. Don’t wait until you have the best camera equipment, because most phones create great videos. Just invest in good audio quality, and you’re all set!”

Also read: It is important for you to be ‘you’, says YouTube influencer Prajakta Koli

68 years after Independence Cheryl Braganza excavates the past