She left home with just Rs 750 and a determination to succeed. Today, she is a successful divorce lawyer: the story of Vandana Shah 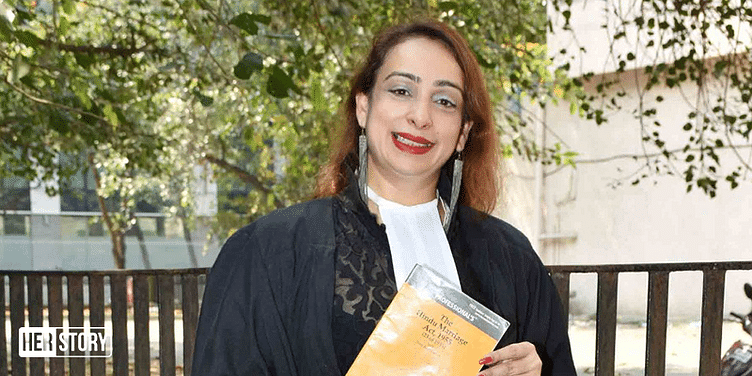 Vandana Shah is a leading divorce lawyer in Mumbai, and a celebrated author and columnist. She has also launched Divorcekart, India’s first legal app dedicated to divorce that provides 24X7 lawyer assistance online.

She left her home at the unearthly hour of 2 am with just Rs 750 in her pocket and nowhere to go. She was 28 years old and had enough of the cruelty of her in-laws. When she walked out, she promised herself one thing. “I must amount to something in life. No one should ever be able to trample upon me again.”

Though it took Vandana Shah 10 long years to get a divorce, her grit and determination saw her through. Her father was a fighter pilot in the Indian Air Force (IAF), and she learnt that “risk” was an inherent part of life.

Over the past decade-and-a-half, her experience not only made her own life turn 360 degrees, but also helped her change thousands of other lives as a divorce lawyer.

Vandana has also set up India’s first non-judgemental divorce support group for those going through a divorce, challenging the mores of a patriarchal middle-class society that has different rules for women. Apart from this, she has also written a book, 360 Degrees Back to Life – a Litigant’s Humorous Perspective on Divorce, based on the experiences of the support group.

She says, divorce has become a common occurrence in economically evolved India. “People are not willing to put up with all the unhappiness and sorrow that bad marriages entail. They are learning to look beyond the concept of being chained down for “seven lifetimes” to a spouse who you can’t even stand for seven seconds.”

Based on her experience as a lawyer, she quotes some unofficial statistics.

“There are about 60 divorce matters on board in the Bandar Family court where I practice, and the building has seven floors, so that’s about 420 matters in a day, though a number of them are ongoing. Still, those are staggering numbers compared to a decade ago where there were only 25 matters on board daily.”

Life is not over after divorce

When Vandana was served with a divorce petition, she was jobless, without any money, and heartbroken.

Of the ordeal, she says, “I slowly transitioned from there, with the help of strangers, friends, well-wishers, and supporters to get a job to put the food on the table to getting a job in the US and earning enough to drive a car and travelling abroad on holidays. Somewhere along the way, I set up India’s first support group - 360 Degrees Back to Life - to provide non-judgmental support to those going through a divorce. The organisation turned around people’s lives and it propelled me to write my first book. Never in my dreams could I have imagined that I would be writing and sharing my experiences with the world.”

Yet, Vandana feels, many women are chained in unhappy marriages.

“There are cases where the spouse doesn’t think twice before using his wife as a punching bag, calling her names like whore, harlot, and tramp. I was in that position once, but I am glad I had the guts to walk away,” she adds.

Being a divorce lawyer

As a divorce lawyer, Vandana has handled many high-profile cases including those of politicians and Bollywood stars. “We cannot breach client confidentiality and share stories. Cases in Bollywood are quite different as they are always in the limelight. The divorce lawyer’s job becomes more important as they help them cope. However, divorces are emotionally turbulent for the poorest of the poor and richest of the rich, whether you are in the limelight or not,” she says.

The Mumbai-based lawyer also claims to have launched the world’s and India’s first legal app, DivorceKart, that aims to answer all legal queries regarding divorce instantly.

Vandana explains, “Usually, when one is hit by panic about a bad marriage or a divorce case already pending in court, you want an immediate cost-effective legal solution at the click of a button -  the app provides immediate legal solutions, answers and guidance about the court procedures, without having to wait interminably for a lawyer’s appointment or get half-baked answers from your friends and relatives.”

“It’s a brave attempt to bring about a change. There is client-lawyer privilege as the app not only provides confidentiality but also anonymity to you as a client who does not want to discuss his/her personal marital issues with one and all,” she adds.

When times are tough

Work as a divorce lawyer entails a lot of mud-slinging, hard-bargaining and at the end of it all, getting justice for those wronged. How does she manage to remain positive in the midst of it all?

“My experience with my own marriage taught me that I had to take charge of my life and accept myself in totality – the good, bad, and ugly sides. Each time someone bulldozed me with their negativity, I refused to believe them. You can either turn the volume down or completely mute the naysayers from your life. I think, if as a divorce lawyer I can remain positive in a war like environment like the court and a family court, which is a hotbed of volatile emotions, then most of us can…. Did it get tough? Sure. But whoever said swimming against the tide is easy?”

Today, besides being a leading divorce lawyer, Vandana is also a celebrated author – her book 360 Degrees Back to Life was endorsed by feminist icon Gloria Steinem. She is also a leading columnist and has also been featured in many BBC documentaries.

Vandana was also a divorce law consultant for Priyanka Chopra’s new film Firebrand, directed by Arunaraje Patil, which is currently trending on Netflix.

Her future plans include expanding Divorcekart across India and around the world.

“It will change the way law is perceived in this country as well as internationally. Since I am also empanelled with the National Commission for Women (NCW), I hope to one day be a part of policy making in law, like my father, who was an air force pilot, and serve the country. I also hope to make law more easily accessible to all non-lawyers by foraging into web-series and other multi-media,” she says.

Also Read: From the Salman Khan hit-and-run-case to PIL on the right to dissent, lawyer-activist Abha Singh fights against all forms of injustice