With her new app, actor and entrepreneur Shilpa Shetty wants to put India on the global yoga map 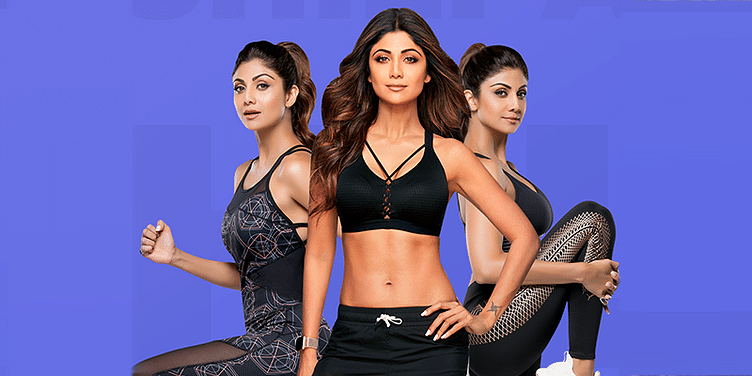 Shilpa Shetty is on a mission to change how India stays fit. Her new app is about workouts, nutrition, and different programmes that will help you stay healthy and fit.

Actor, investor, and health and fitness expert Shilpa Shetty believes there is no age to find your calling. And as the actor and businesswoman turns 44 today, she admits she found hers “a little late in the day”.

But that’s no deterrent, says the actor, who is among a small but growing number of women who have redefined "sexy and svelte" in their 40s. Indeed, Shilpa Shetty's sheer passion and enthusiasm for fitness and her self-acquired knowledge on health and nutrition have set her apart.

And now, the entrepreneur has launched her new labour of love – the Shilpa Shetty app. Launched first on iOS and due later for launch on Google Play Store this month, the app is one after her own heart. It aims to help people achieve their desired goals in ‘simple and soulful’ ways.

In the first few days of its launch, the app received an overwhelming response, and ranks No. 3 among health and fitness apps on the iOS platform.

“The main goal for me is health and if I am able to spread that in terms of awareness I feel like I have delivered the home run,” she tells HerStory over a phone call from Mumbai.

Embarking on the health and fitness journey

An avid reader, her curiosity to know more about health and wellness led her to embark on this journey. “I started off with telling myself, 'better late than never',” she says.

Soon, she launched the yoga DVD, and then wellness chain Iosis, which she co-owns. In 2018, she invested in a startup and also published books on health and wellness and recently launched the app.

“It has been a very gradual progression and a natural one. I can’t point to one moment or one instance where it took off because it has been a gradual journey,” Shilpa Shetty adds.

As an actor and celebrity who is continuously in the limelight, Shilpa realised how curious people were about her post-pregnancy weight loss, her fitness regime, and her skin care regimen. “Since many were intrigued and didn’t know how to go about it, I realised I should share it with everyone. It isn’t rocket science, and health is the biggest gift you can give somebody,” she says.

Shilpa does not believe fitness is only about having a kale smoothie or incorporating avocado into your diet. Her meal plans centre on ghar ka khana (healthy every day home meals) that are an intrinsic part of most Indian households.

With her yoga DVDs, her book, YouTube channel, and now the app, Shilpa wants to spread the word and help people be healthy.

“I personally put in time and money - it is all my own. I feel very proud to say that very few people, even actors, are willing to put money where their mouth is. So for me, this is an investment in health.”

Manish Kumar, Founder of Digi Osmosis, partnered with Shilpa for the launch of the app.

“I didn’t start it as an entrepreneurial venture at all,” reveals Shilpa. Two years ago when she started posting free recipes on her YouTube channel she decided to add videos of all her workouts but realised that if she didn’t put a value to it, then people wouldn’t really follow it the way she wanted them to.

Also, Shilpa realised that if she was putting it out there on an app then she needed to pay attention to technique and the “how” aspect of the workout.

So she went back and reshot all the videos and added more information about the techniques, and physical aspects of the workout. “I wanted to share the science behind it and I shot an extra 200 hours of content, which took me two years. It became a venture only after I collated all the new material. We will add the new videos onto the app.”

Pouring in love, time, and money

And the Bollywood star is ecstatic with the response. “I am really happy I was able to deliver this 'baby' after two years. There are so many odds we deal with on an everyday basis. When my business partner told me we had topped the charts in two days I just couldn’t believe it.”

On the business and revenue aspects, Shilpa says, “If you are looking at a post-pregnancy weight loss programme, you will have access to detailed information, say around 150 pages on everything about what to eat, drink, how and why.” However, she is looking at customisation in the second phase since she needs more money to roll out that feature.

The aim of the app is not just weight loss but to also make people aware of food, nutrition and fitness.

“I am not giving you the guarantee that you are going to lose 10 kg in one month. But if you embark on this journey I guarantee you will change and modify your lifestyle. You will understand why we are asking you to eat in a certain way, and when not to eat. You will understand and be educated along the way. And then you will convert your lifestyle into a healthier one. You will automatically lose weight depending on your BMI.”

Of course, the best part about the app is the brand that is Shilpa Shetty, but what makes it stand out is also her love for yoga. “I wanted people to know that if I can do every workout that's on the app - from core strengthening to agility, endurance level, yoga asanas, when I am 43, so can they.”

From Priyanka Chopra to Deepika Padukone: Bollywood actors are investing in startups

With this app, Shilpa also wants to be a path breaker when it comes to yoga. “There’s no one from our country who can boast of a world-class yoga app and I want to be the path breaker there.”

In 2018, Shilpa also invested in Mamaearth, a mother and child care products startup founded by husband-wife duo Varun and Ghazal Alagh. Shilpa is an equity investor in the startup.

“I really have a lot of belief in people who are very enterprising, and with a passion. They want to do things they believe in and I am willing to put money into them. That’s how Mamaearth happened.”

But she has a word of caution here. “Right now, I don’t want to spread myself too thin. At present, it is all about the Shilpa Shetty app and I want to consolidate and put my focus and energy into this. We still have so many programmes to upload onto the app. There is still a lot of work to do and it will take time.”

Of good and bad days

She agrees that being constantly judged and people expecting you to always turn up impeccably does take its toll. So what if she really has a bad hair day? She laughs, “I tie up my hair or head to Iosis for a blow dry.”

It’s just not about the looks always. She has seen a fair share of other challenges in her journey. “You have seen me go through the bad days, the controversies in my personal life; I have also been through professional lows in my life. You just have to stick it out. What doesn’t kill you makes you stronger. I really believe that.”

Shilpa is continuously juggling between the personal and the professional. She admits to being a micro-manager and says being fit and healthy helps.  But the weekends are for “cheating”. She does not hesitate to indulge herself and post it on social media for all to see. So it’s pretty much about “what you see is what you get”, when it comes to Shilpa.

Switching off is also important to her.

“The only place where I find silence is during my 15-20 minutes of daily meditation, which I am addicted to. I stick to it and do it either at the end of the day or the beginning.”

The other thing that keeps her going is gratitude. “Gratitude is my magic pill. I wake up first thing in the morning and thank the lord for being alive and healthy, for being able to speak and share all things I am able to, and for all the opportunities that come my way. It sets the right tone and keeps me going.”

The journey of Sastodeal’s Sumitra K C: From a manager at Flipkart to the CFO of Nepal’s leading ecommerce company