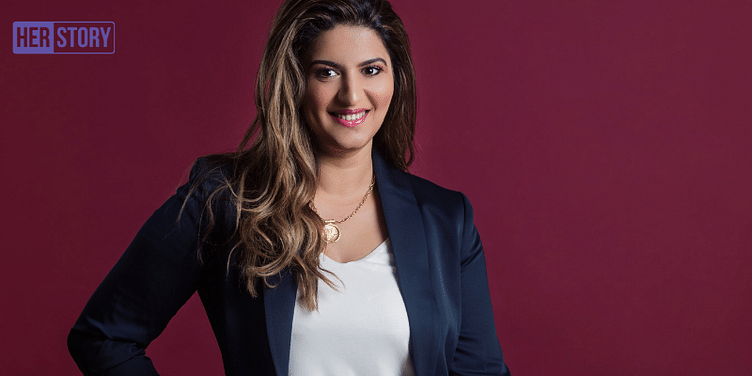 Pamela ‘Puja’ Kirpalani is the Founder and CEO of Inner High Living, and a well-known NLP trainer and coach. Previously, she headed the export arm of her father’s company, Page Industries (Jockey India).

After setting up the export division of her family’s innerwear manufacturing and distribution business, Page Industries’ Jockey India, Pamela ‘Puja’ Kirpalani gave it all up for marriage.

But this also paved the way for Puja to think of starting up in another direction. With her venture, Inner High Living, she trains world-class companies, private companies, and private groups in scientific persuasion and non-verbal communication workshops, with the help of Neuro-Linguistic Programming (NLP) techniques.

From exports to NLP, the transition was steeped in serendipity. But it was also an extension of a personality that embraced connect and communication like no other.

Puja explains, “I was born in the Philippines and raised in different countries – Indonesia, Africa, and the UK. So, I am close to many cultures. My father settled down in Bengaluru in 1995 to start his own business. After completing business studies from King's College, London, I worked for a while with EY as an investment banker. But it was natural for me to follow in my father’s footsteps.”

Between 2004 and 2006, Puja helped her industrialist father Sunder Genomal set up the exports arm of Page Industries, liaising with buyers and clients, and supplying innerwear to brands like Marks & Spencer and Benetton.

After getting married in 2006, Puja moved to Indonesia and became a homemaker. After she had two children, she decided to start working again but didn’t want to enter the same industry because of the long working hours.

During a visit to Bengaluru, she enrolled for a course in NLP on a lark, and says she was hooked.

“I fell in love with it. I have always been fascinated in knowing what makes people tick and how interpersonal relations and psychology work together. This course was a huge underpinning for me. I am a people’s person and one of the areas I am most interested in is non-verbal communication or body language,” she says.

Puja got in touch with FBI experts in the US to hone her skills in the area and really enjoyed the process. Soon, she was taking courses - left, right and centre - to receive certifications in these areas. She is certified by the esteemed Australian Board of Neuro-Linguistic Programming (ABNLP) as an international NLP master practitioner, trainer, and life coach.

Her most in-demand workshops focus specifically on teaching prospective clients how to use and examine the “silent messages” of body language - with the objective of increasing sales and building more powerful connections.

Puja emphasises on the need to communicate effectively in today’s world. She says, “One reason for my workshops being popular is because the millennial generation has become detached from face-to-face communication. They just don’t have the skills to interact effectively. But people are also curious and my aim is to empower them to communicate better.”

She also agrees that most of us suffer from isolation and there is so much social anxiety.

“Internet has changed the social landscape in different ways and our eyes these days are pretty much fixed to screens. This is debilitating and that’s why people are getting curious about effective communication,” she adds.

As a life coach, Puja’s clientele mostly comprises women, often young mothers struggling to find a purpose. With the help of NLP techniques, she helps them forge new paths and gives them a direction in life.

In today’s world, when work-life balance seems to be elusive to most, what is her advice for working mums?

She says, “My best advice is to prioritise what you want from life and work. My golden rule is that I can do only three big things in a day – self-care that includes exercise, prayer or meditation, work-related stuff, and time for my family.”

For her target generation, the millennials, Puja believes that they need to identify their true talent. She explains, “They have to understand what their innate abilities are and work around getting there. Once they do it, they are going to shift jobs constantly. A lot of them have also become entrepreneurs.”

Empowering others, Puja says, gives her a deep sense of satisfaction. Does she regret giving up her role in her father’s business?

She says, “I had no choice because I had to move out of the country after getting married. If I were in India, I would have continued with the job. But I am thankful my love led me on a different path. I am still associated with Page Industries as a trainer.”

Puja plans to expand Inner High Living to more countries, and also focus more on India. She has also written a book, Whole, on being a wholesome individual and embracing 11 virtues and values with the help of neuroscience.

This woman entrepreneur takes sustainable fashion out for a walk with her ‘green’ footwear made...