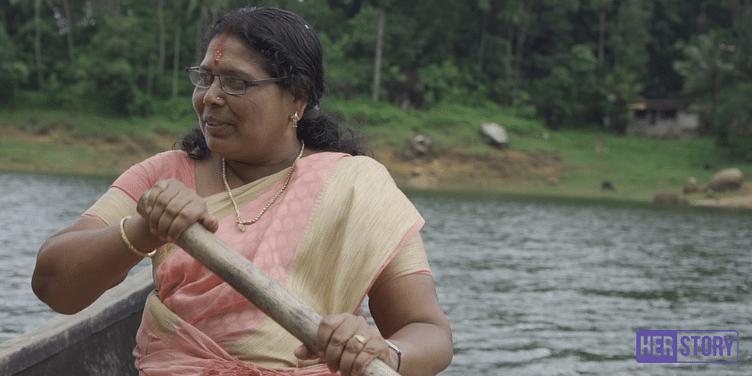 KR Ushakumari is the lone teacher at the Agasthya Ega Adhyapaka Vidyalaya at Kunnathumala in Kerala. She teaches 15 children from a nearby tribal settlement in Classes 1 to 4 in all subjects, and guides them through extra-curricular activities.

Teacher’s Day is not just about paying tribute to teachers who have dedicated themselves to teaching the three R's, but also to those selfless souls who have enriched our lives with their untiring devotion to instilling the right values.

KR Ushakumari is one such teacher-warrior from Amboori, who singlehandedly runs the Agasthya Ega Adhyapaka Vidyalaya at Kunnathumala, in the Agasthyakar Koodam biosphere in Thiruvananthapuram district, Kerala. Over a call, she tells me she is teacher, principal, peon, as well as the midday meal in-charge of this school nestled far from civilisation in a tribal settlement.

She walks, rows, and treks to school

On the day we spoke, Ushakumari couldn’t go to school because of heavy rains, and despite many attempts to somehow make it, she had to find way her back home unwillingly.

For the route to school is one fraught with many difficulties.

She explains: “I take a three-way long route, which includes a 25-minute ride on a scooter that I bought recently to escape the long walk. I park the scooter on the bank of the river Kumbikkal Kadavu and get on a boat to be rowed across the river with a boatman. Often, because of strong winds, I have to row too. After the boat ride, I have to trek through the hills of Kunnathumala for four kilometres to reach the school.”

It takes Ushakumari two-and-half hours to and from school – a journey that is sometimes cut short by landslides, unpaved paths, or blinding rain. She has fallen down many times, she is also asthmatic but all these obstacles do not deter her in any way. She makes it a point never to miss school, except on those days, when Nature decides to play spoilsport. And even when she is back home, she is busy doing all the administration work of the school.

The journey has been the same since 2002, except for the addition of the Scooty, and no change in status from honorary teacher. “I just get a salary every month, or sometimes once in a few months without any other benefits,” she says.

Ushakumari’s lifelong purpose has been to stand up for what is right, and work for the larger social good. “I began my work as a social activist in 1984 working for the literacy programme in the State, especially for tribal education. Intially, I wanted to join the police and also passed the PSC test, but my family did not let me join. Soon, I got involved in a number of projects as part of the Amboori Grama Panchayat,” she adds.

While she was working towards tribal welfare, a survey found that parents in the area did not allow their wards to go to school because of the rugged terrain and the presence of wild elephants. It took a lot of convincing on her part till the children began coming for makeshift classes on verandahs of houses.

After four years of ardous campaigning, the school was housed in a building. The Agasthya Ega Adhyapaka Vidyalaya has 15 children from the tribal settlement in Classes 1 and 4, with just one teacher—Ushakumari—and another woman who runs the mid-day meal scheme.

“My life as a teacher, though fulfilling, is one that comes with many risks because of my journey. I get nothing else apart from the salary. Sometimes, I put in my own money into the running of the school. They are my children and it’s my duty to care for their wellbeing. The entire settlement has so much of love and affection for me.”

The fruits of labour

Ushakumari takes immense pride in the fact that her first batch of students, who passed in 2003, is doing very well in their chosen fields. So far, she has taught over 200 students at the school. “Once, I went to a government office and the clerk there was my former student. She was excited to see me and did everything to make me feel comfortable. To see my students do well is my biggest reward,” she says.

Once the students complete Class 4, they are equipped to seek admission in any school in Kerala as Ushakumari makes sure they hone their skills in all fields. Whether it’s music, dance, art, drama and sports, the students are well prepared and this lone teacher keeps the school flag flying high. This is possible only because she has taken great efforts to assimilate their traditions, culture, and language in everyday lessons.

All this would not have been possible, she says, without family support.

“I sometimes use groceries from my home for the school. My son is also a qualified teacher and substitutes for me if I have some other urgent work. Some of my former students, who are also teachers, pitch in to help. I see the hard work of my benefits this way,” she says.

If she misses school even for a day, the students are worried. They wait along the way, and their time is tuned to her coming and going.

On Teacher’s Day, when I ask if she has a message to pass on to others, she says, “My experience has taught me that we have to be dedicated in whatever work we set out to do. I am responsible for the future of my students. Their doing well will be my job well done.”

When Tatahir Fatima, a school teacher from Bihar didn't miss work even on her wedding day