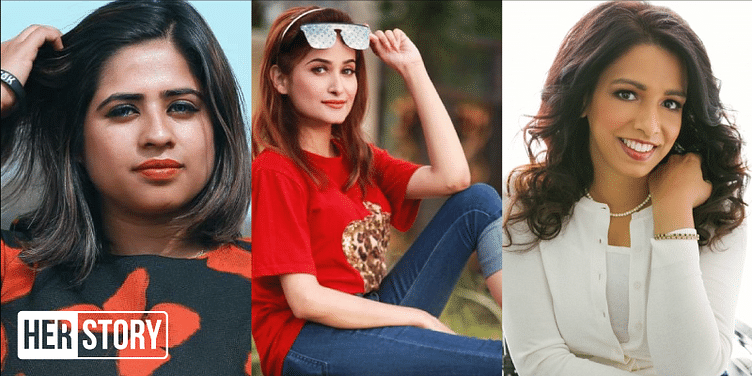 TikTok has changed the game in the social media space with its short video content. The platform makes it easy for women with smartphones to become content creators and earn money easily.

Owned by Chinese internet giant Bytedance, TikTok, a short form video curation app, has taken the world by storm. Indians too have joined the TikTok bandwagon and made it one of the most downloaded apps in the country in the first quarter of 2019.

What makes TikTok so popular? The format is short – just 15 seconds, and all you need is a smartphone and a lot of creativity to go viral. It is also available in 10 Indian languages including Hindi, Kannada, Tamil, Telugu, and Malayalam.

Most importantly, TikTok has helped everyone express themselves, whether it’s their creativity, their quirks, or their funny bone, especially women.

A spokesperson for the TikTok India team told HerStory, “It is a place where everyone belongs - regardless of nationality, ethnicity, gender or socioeconomic levels, as it offers a vibrant buzzing atmosphere that celebrates trends and embraces diversity. Women from the deepest pockets of the country, from Tier I, II, III and even Tier IV cities are using TikTok to share their knowledge and talent in creative formats. Also, the platform has a very easy-to-use and interactive interface, which has allowed them to connect with the larger community and like-minded people.”

Women are creating content on topics such as food, music, travel, music, acting to comedy, food and festivals. The spokesperson added,

It is great to see how women from different backgrounds come out and express their talent on the platform. We have observed a diverse range of content being created by female users; from educational to entertainment and comedy, women have discovered their hidden talent and are showcasing it in front of a global audience. Women creators are also actively promoting health and wellness on TikTok by posting yoga and other fitness videos. Apart from these, it is very interesting to note that women lead the charge with posting videos with their family members.

Some of the women content creators have become celebrities with millions of followers and are making money by helping brands access consumers in small towns and cities. It is a win-win for everyone - TikTok, content creators, and brands looking to reach their target audience.

HerStory spoke to three TikTok content creators to understand about their stardom, and how the platform has changed their lives.

Early this year, Geet shot a funny video with her 87-year-old grandmother and was trying to figure out which platform would be apt. Since she had heard about TikTok, she decided to give it a shot.

Sangeeta Jain, known as Geet on TikTok, became paralysed at the age of 10 when she met with an accident. She has been on a wheelchair since.

However, she shortly switched to motivational videos because she felt she was more suited to do them. “The first few videos I posted were on a saas-bahu relationship, self-confidence, and also one domestic violence, and the response I received for these was phenomenal.”

People would comment things like, ‘your video is changing my mindset, your video is helping me to leave an abusive relationship, I'm coming out of depression watching your video’. And to me, that was shocking, because I never thought that in 15 to 20 seconds I could make such a difference in someone's life. That encouraged me to actually continue on this route.

Geet spends her time between Delhi NCR and Seattle. She has an engineering degree and a doctorate in law, and was a lawyer in the US, but gave up and moved to India to start an NGO that works with the youth. “Growing up, I always wanted to make a difference in someone's life. And I felt like, gosh, what if I'm able to do that here,” she says.

Today, Geet has 2.2 million followers. And a month after she started the first one, she started getting requests on the platform for teaching English, and that is how she began English with Geet.

“I am not an English teacher, but I decided to give it a try. Since I grew up in the US, English is easier for me than Hindi. I was open to it not being successful and become a hit, but I wanted to give it a shot, and so I started putting the videos on my English channel. To my surprise, it actually did better than the motivational channel. Within one week, I had 100,000 followers, and that's when I was like wow!”

She has 4.5 million followers currently.

Geet keeps the videos simple and basic and addresses common mistakes like “hats off” instead of “heads off” or instead of words like pretty, one could use other synonyms such as gorgeous.

“I actually grew up wanting to be an actress, but never thought I could because I was in a wheelchair. I wasn't sure how the audience would respond. So I started a Facebook page, because my brother said, “why don't we see how the audience will respond to you.” The response was phenomenal. And so I continued doing that and moved to other platforms and then TikTok.”

With TikTok, women can have a career while working from home. You see a lot of mothers using the app. Also, brand collaborations help make money.

Shivani hails from Ranchi, Jharkhand. She moved to Surat after her marriage, and now lives with her husband and in-laws. Shivani quit her job to pursue posting videos on the platform full-time. Today, she has 3.9 million followers on TikTok.

She started posting videos in September 2017 after seeing a friend share videos on WhatsApp with the Musically logo, and was fascinated to download the app. Musically was absorbed into TikTok by parent company Bytedance.

Shivani started creating content around pets, mostly her dog. She says, “As my thought bubble expanded, I started looking at more content and making videos on women empowerment, social issues, and people showed a lot of love to the content I was creating.”

By 2018, she realised the potential of the platform, and hence quit her job and decided to take it up full-time. Her family understood her passion and offered their complete support. “I am nothing without my team, which is my mother-in law, father-in law, and my husband. Together, we brainstorm on the content to put out.”

Shivani has an MBA degree, and has worked as an HR professional for five years. “I had never done content in my life before, and never thought my life will change and people will call me a celebrity.”

I look at myself every day and tell myself there is so much to explore. The recognition I received on the platform has given me something that I never dreamt of. I am a small town girl. I was a studious person and wanted to be independent and do something. I didn’t want to be somebody’s daughter to somebody’s wife. So, TikTok gave me something and I discovered I am passionate about it.

TikTok has not only given her visibility but got a lot of collaborations. But what she loves the most is the opportunity to engage with millions of followers. Her videos are on women empowerment and social issues but she also follows the trend and makes videos accordingly.

She is also proud that her videos haven’t received a single hate comment. “TikTok in one sentence has changed my life. As a child, I wanted to create social impact, but once I started working, I got into the usual rat race. Now, I have time and money and energy to invest into making videos that are about women empowerment and issues that matter.”

She also advises other women to go for it.  “Don’t think about it, just start creating content and once you get into the groove, you will only get better. I started with a simple video and then as I learnt more things and started investing more time in thinking about understanding how it works, things changed.”

Fizza Abidi got on the app in August last year. She had seen her friends’ videos and wanted to give it a shot. She started with lip syncing, and then thought why not do beauty videos.

“After a few videos, I was contacted by the TikTok team, and they appreciated the videos and that motivated me to create more content on the platform.”

Based in Mumbai, the 32-year-old is a professional make-up artist, a blogger, and a beauty influencer. She says,

“I never thought I would do beauty-related content on TikTok, and it would get so much appreciation. I had done one minute videos on YouTube, but 15-second videos was a new experience. ”

It was not an easy beginning on TikTok for Fizza. “It is not easy for someone like me to be on TikTok because in our community, they do not accept girls who do a lot of makeup and all. Eventually, everyone saw that my videos were much more than about just make-up. They helped build confidence in women.”

Fizza spends anywhere between an hour to sometimes 2-4 hours working on a video. “The video has to be innovative and it takes that much time to plan and shoot.”

She also collaborates with other TikTok stars and tries different looks on them and this helps both accounts get visibility. She gets a lot of help and support from her fiancé.

I have received multiple brand collaborations, which has helped me with my career too. It has given a boost to my career and over time, I got better brands, better deals, and even celebrity managers contacting me for make-up sessions.

With a little ingenuity, a smart approach and oodles of confidence, these TikTok stars are enjoying what they do and are making money too. Making a career out of a social media platform is now more than a bright idea!