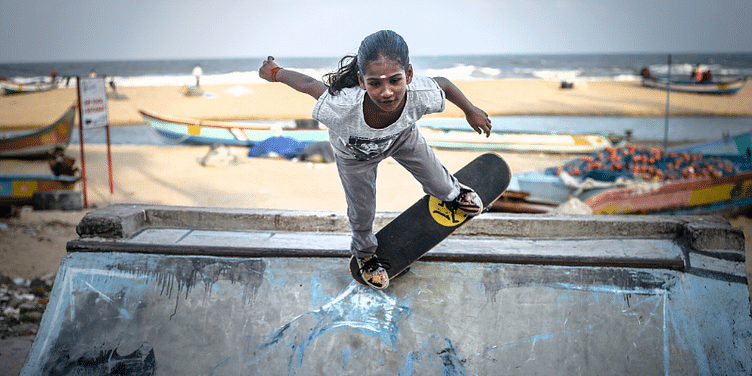 Kamali, a short film based on the life of Kamali, a nine-year-old skateboarder from Mahabalipuram, and the struggles of her single mother, has won international acclaim and recognition.

In a small fishing hamlet in the beach town of Mahabalipuram, Tamil Nadu, a little girl is on her skateboard, swirling around a small plank with gay abandon. Her hair is flying in the wind, and her eyes are shining as she smiles.

Kamali Moorthy was born to fly, in contrast to her mother, Suganthi, whose life was spent in a cage, until she broke away from a marriage she was forced into when she was just 17.

The contrast is important, for from Suganthi’s story springs Kamali’s freedom to enjoy a sport and her rise to fame.

Of struggle and hope

The many endearing images of Kamali and her mother’s tale of struggle form the crux of Kamali, the award-winning short film by Sasha Rainbow that earned a BAFTA nomination, made it to the Oscars longlist, and won many other awards in the past year.

After her family married her off at 17, Suganthi faced constant abuse from her alcoholic husband. In the film, she tells us she gave him many chances, but had to finally leave and return to her parents – for the sake of her children, Kamali and Harish.

Aine Edwards, an Irish expat who is Kamali’s mentor, sends me voice notes of a conversation with the nine-year-old from the beach. They are interspersed with giggles and shy answers and the innocence of childhood seeps through the lilting voice.

Kamali was introduced to the skateboard at the age of four by her uncle’s friend. Since then, she has been stuck to it. Aine, who used to come down to Mahabalipuram on weekends, noticed the lively girl on the skateboard in 2012 and soon became a friend of the family. She happened to meet Jamie Thomas, Founder of Zero Skateboards, and introduced him to Kamali. And the rest, as they say, is history.

Girl of the world

Thomas posted an image of Kamali in a white frock on her skateboard, which went viral and caught the eye of professional skateboarder Tony Hawk. Impressed by her skills, he gifted her a skateboard. With it also came the short film, and Kamali’s life changed forever.

The film takes us through Kamali’s everyday routine, Suganthi waking up her with a cooing ‘chellakutti’ (sweetheart), praying (not just for herself, but for the welfare of all), some playful banter where the brother and sister call each other ‘mutaal’ (fool) and her uncle dropping the children off at school. Suganthi then trudges up to the stall she sets up on the beach for tourists, offering lemonade and masala fish.

In the film, Suganthi is shown going on a pilgrimage by foot to the Basilica of Our Lady of Good Health, also known as the Velankanni shrine, the famed Catholic church dedicated to Mother Mary in the Nagapattinam district of Tamil Nadu. Though she bids a tearful goodbye as she starts on the over-250km walk, Suganthi paints a stoic picture, displaying the mettle that is universal for single mothers who brave challenges alone.

“I face many challenges as a single parent raising two small children. Many people continue to ask me why I am ‘wasting my time teaching a girl to skate’, how this will help her future, and who will marry her if she breaks her hands or legs. Kamali is the only girl to skate in Mahabalipuram and many boys don’t let her play," she tells HerStory.

However, Suganthi is determined to not let the stereotypes restrict her or Kamali. “No matter the challenges or hardships that come my way, I will fulfill both my children’s dreams.”

Happy doing what she loves

In the voice notes that capture the waves crashing onto the sea in the background, Kamali speaks of how she finds happiness in the skate park, at home, or in the water.

Her childlike words belie the greatness of her story and how it has the world enraptured. In that sense, the wunderkind is like every child her age, content doing something she loves.

Her voice dips when she complains about the boys. “I am the only girl skateboarding. They tease me, this is the hardest challenge for me,” she says.

But the sadness in the voice soon disappears as she perks up to take about her daily routine. “I wake up, brush my teeth, go to the toilet, and have bread and Nutella for breakfast,” she laughs, adding that she likes English the best at school, followed by Maths and Science.

The short film has changed the family’s life to an extent. Kamali’s is a recognisable face now.

Before this film, Suganthi did not know of a world outside Mahabalipuram. “I have travelled to other places because of this film, met good people, and am also happy that Kamali got to explore a whole, new world. This is my first victory in 19 years.”

The family is hopeful that the international recognition Kamal’s talent has received will help her take her skateboarding career further. The nine-year-old has attended Jugaad, a national skateboard competition.

“Looking at how Kamali has inspired other girls to skate is a great source of joy for me. I have never dreamt about tomorrow or the future; I have always believed that whatever happens should happen well. I will always be a supporter for my children’s dreams and aspirations. I won’t be the one to force my dreams on to them,” Suganthi says.

In this family’s hopes and prayers lie a little girl’s dreams. And, she is determined to fly high.