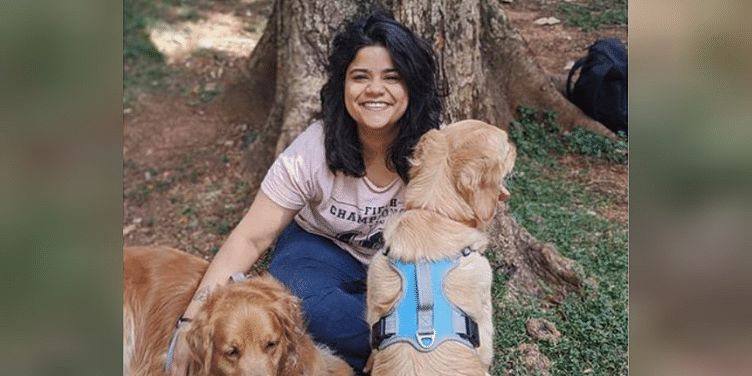 Mounica Tata uses her Instagram page doodleodrama to highlight many issues plaguing the country including sexual harassment and patriarchy. As a freelance illustrator, she has worked with Amazon Prime on its Lakhon Mein Ek series.

Illustration has become a powerful form of showcasing ideas on virtual platforms.

Mounica Tata is a self-taught illustrator-turned-professional freelance artist who works for many famous brands.  On her Instagram page, doodleodrama, Mounica gives free rein to her imagination. The handle is a potpourri of insights into her daily life, told through cute comics.

The subjects of her cartoons are varied – from guilt-eating, life-long friendships, conversations between her two pet dogs to serious undertones like sexual harassment, patriarchy, and the political climate, Mounica illustrates them all.

A persistent artist, Mounica never imagined she would one day use her drawings and illustrations to earn a living.

How a hobby became a profession

An Army brat, Mounica spent her childhood in different places in the country - in Ranchi, Roorkee, Ambala, and Secunderabad in North India.

She moved to Bengaluru to pursue higher education in 2011 and she says, “drawing as a hobby” began to take centre-stage while she was doing her Master’s in Mass Communication.

“The college I went to was very strict and dissent of any kind was not entertained. That’s when I started making comics on college life, the professors, dress code, and the strict regimen. It was my way of containing my rebellion within the four panels!” she recalls.

When she was discovered, most of the professors let her go believing that if they took offence over a comic it would look silly.

That’s when she realised the power of visual art, comics, and kept on drawing. Soon, she started a Facebook page to catalogue her work.

After completing her Master’s, she worked for an online magazine, communication agency, and social media marketing and design agency. She quit in 2016 to become a full-time freelance illustrator.

Mounica says it took some time for her to find her style and voice as an artist. To put it simply, she says everything that affects her or evokes an emotion is reflected in her art.

Her work deals with topics surrounding violence and vulnerability, subjects that are socially considered taboo. Mounica says her work is an extension of herself and that she cannot choose to draw only happy and cheerful things.

While engaging with nearly a million followers on Instagram today can be overwhelming, staying authentic and consistent has guided her through. The page has helped her build a small community and safe spaces for her work to be consumed and processed.

Mounica has also been inspired by well-known digital creators such as The Oatmeal Comics, CyanideandHappiness, lastlemon, Alicia Souza, and Zen Pencils, who have proved that one can make a living through cartooning.

Over the past four years, several companies have commissioned her illustrations. She worked for video streaming platform Amazon Prime on its original series Lakhon Mein Ek.

Another notable effort was on card game, War Against Children’s Issues with International humanitarian aid organisation World Vision in Chennai. A set of around 50 cards, the game spreads awareness on issues like climate change, child protection, and road safety, among others.

While it is challenging and fun to learn and evolve, Mounica agrees that there is always the pressure to create unique stuff.

“It’s addictive and tempting to be a part of this unnecessary race we have started online as creators to value your work based on the number of likes and shares,” adds the illustrator and writer of children’s book Getting Ellie Home.

“I drew every single day for almost six years before I quit my job. And when it was a hobby, there was no unnecessary pressure on my art,” she clarifies.

A day in the life of digital creator

Besides real-life events, Mounica also takes inspiration from books, movies, and music. She spends a great deal of time between ideation and publishing, writing and condensing into bite-sized comic panels.

In order to ensure productivity as a freelancer, Mounica maintains a routine and draws a firm line between work and “me-time”. For instance, she does not entertain work-related calls or emails during weekends and has a dedicated workspace at home.

She relies on the to-do list of all her activities including household chores like cooking and walking her dogs.

At the end of the day, she says, “whether it’s an illustration or any other “non-conventional” career choice, I think hard work, skill, and being true to your craft will eventually pave the way. It is also important to be money-wise!”