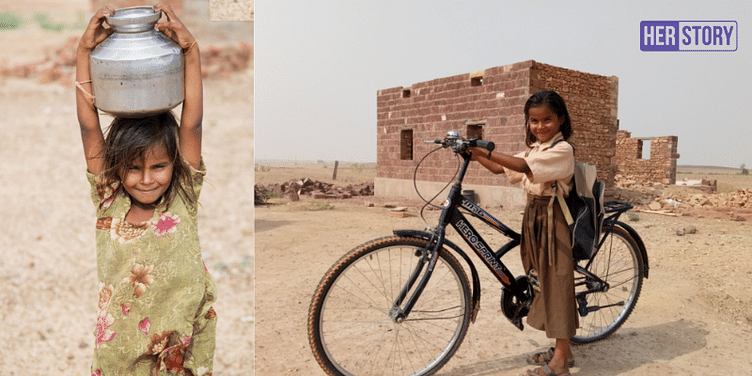 A changemaker at heart since 12, Raju Agarwal’s non-profit OneProsper in partnership with Jodhpur-based NGO Gravis is sending girls in the Thar desert to school.

In Ugras village in Rajasthan, in the Thar desert that forms a natural boundary between India and Pakistan, Gita’s days were spent helping her mother collect water by walking for hours in scorching heat. The long walks and lack of drinking water often caused Gita and her siblings to suffer from stomach ache and heat stroke. Being able to attend schools remained a distant dream.

In 2017, the fate of Gita and many others like her in the desert changed when Canada-based non-profit-organisation OneProsper decided to help young girls gain access to education. It had partnered with Jodhpur-based NGO called Gramin Vikas Vigyan Samiti (GRAVIS) that works with desert communities and empowers the rural communities of India.

The partnership has led to supporting 260 girls from over 130 families living below the poverty line (BPL). This meant Gita could now discuss matters of science, basic calculations of Mathematics, or even indulge in storytelling with her friends. Her days begin by getting ready for school in her crisp uniform, a moment of pride.

“The tanka technology is at least around 800 years old that the kings of Rajasthan used to build for entire villages. Gravis started building a mini-version of such tankas for each household and we funded the project,” Raju Agarwal (51), Founder and CEO of OneProsper tells HerStory.

As women and girls in the family are no longer required to spend hours fetching water every day, women could find work and girls could attend school. He adds that the tanks have an inbuilt biosand filter for clean drinking water and the beneficiaries must be families identified as BPL with two daughters or more.

Additionally, the organisation provides school fees and other necessities like school bags, books, and uniforms. They also help women set up a kitchen garden next to the tankas to grow fruits and vegetables.

As most families own huge farmlands that are arid, the organisation found ways to help them grow crops to earn extra income. “We built a farming dyke called a Khadeen. It is a wall that is built across their farmland and perpendicular to the water flow to increase soil moisture and boosts their crop production,” Raju adds.

From agriculture to education

Although born and raised in Canada, the seed for OneProsper was sown when Raju was 12-year-old and had visited India for the first time in the 1990s.

He recalls, “I was travelling by train across UP and saw families lying down on the railway platform. Their bodies were physically emaciated and I had never seen that before.”

That is when he made a decision to help the underprivileged and continues doing so more than three decades later. In the years that followed during his stay in Canada and Boston, US, he looked at ways of outsourcing work to India to increase employment opportunities. In fact, he had also written to the likes of Mr Ratan Tata, Kumar Mangalam Birla, and the Ambani Group.

During his next trip to India, he met a young girl in Jaipur who could not afford school. Raju was committed to uplift the underprivileged, to support girls’ education, and was looking to start a non-profit organisation.

He was also closely following Bill Gates’ efforts towards improving small farmers’ lives and income when he came across the non-profit social enterprise IDE-India in 2010. Based in New Delhi, the venture specialises in developing low-cost irrigation technologies and market linkages for small scale farmers.

“I was in the process of getting legal approvals Canada and at the same time, creating the vision for OneProsper.  I read an article on IDE-India and thought of supporting women small farmers in India by providing them with drip irrigation systems,” he adds.

However, he decided to pivot towards focusing on girl education after seven years in 2017. The initial response was not too favourable. “They were used to the traditional way of farming and was not keen on adopting new age technology.”

The partnership with Gravis changed the course for the NGO as well as they women they were helping.

At present, OneProsper has partnered with schools in Canada and plans on connecting the students in Canada and India so that “girls in Rajasthan can improve their English.”

He says that the NGO has been able to conduct its work, thanks to generous donors likeThe Atul and Richa Aggarwal Foundation and Michael Hyatt, Founder of BlueCat Networks who also spreads the word regarding OneProsper’s work in India while speaking at various events.

On the flip side, Raju shares that successful business people have also declined to donate. "I know many Indian millionaires living in Canada that have declined to help. They feel that they have made their money in Canada and should give back to the local community. A person even told me that donating to the local community is good for his business.”